It’s week like this that make me really love Makeover Monday. The creativity, the analysis, the insight, the passion, the camaraderie; this week had it all! Given a fairly simple data set, I asked everyone to try to stick to a one hour time limit. Here’s my approach for projects I need to do quickly:

I try not to overthink things. This process works for me; I’d encourage you to find one that works for you as well. It’ll speed things up for you in the long run. Beware of the time formatting takes! For me, formatting takes nearly as much time as building the viz itself.

The data set this week was about the World Economic Freedom and in particular, their index for measuring economic freedom. I was delighted to see very few maps; the original is a map that doesn’t work very well and it looks like many people agreed.

LESSON 1: USE HIGHLIGHTING TO DRAW ATTENTION

There must have been 20-30 (if not more) submissions this week that used highlighting to bring focus to one or more countries. Highlighting is very effective for providing context for the highlighted items compare to everything else. In this case, highlighting a single country (or maybe 2) and keeping all other countries in the background in a light color. The key with highlighting is to make sure the items selected stand out DISTINCTLY from all of the others. Here are some examples of highlighting done really well this week: 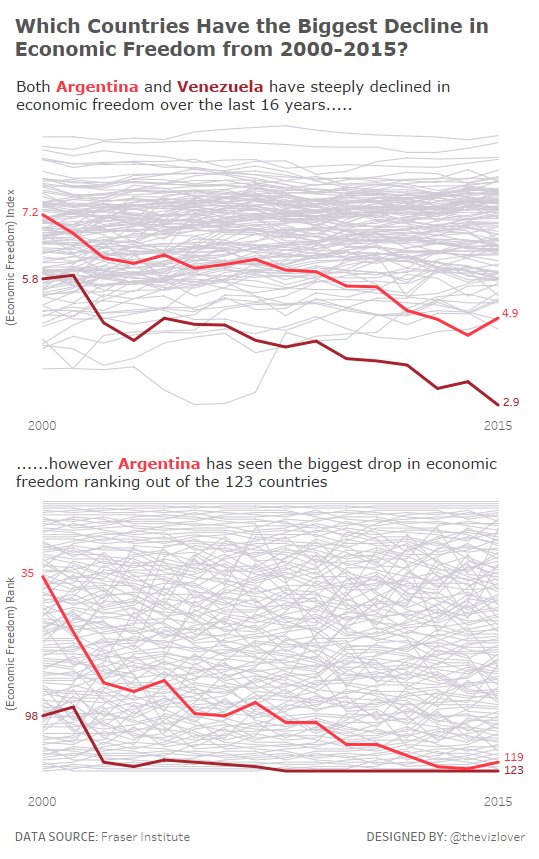 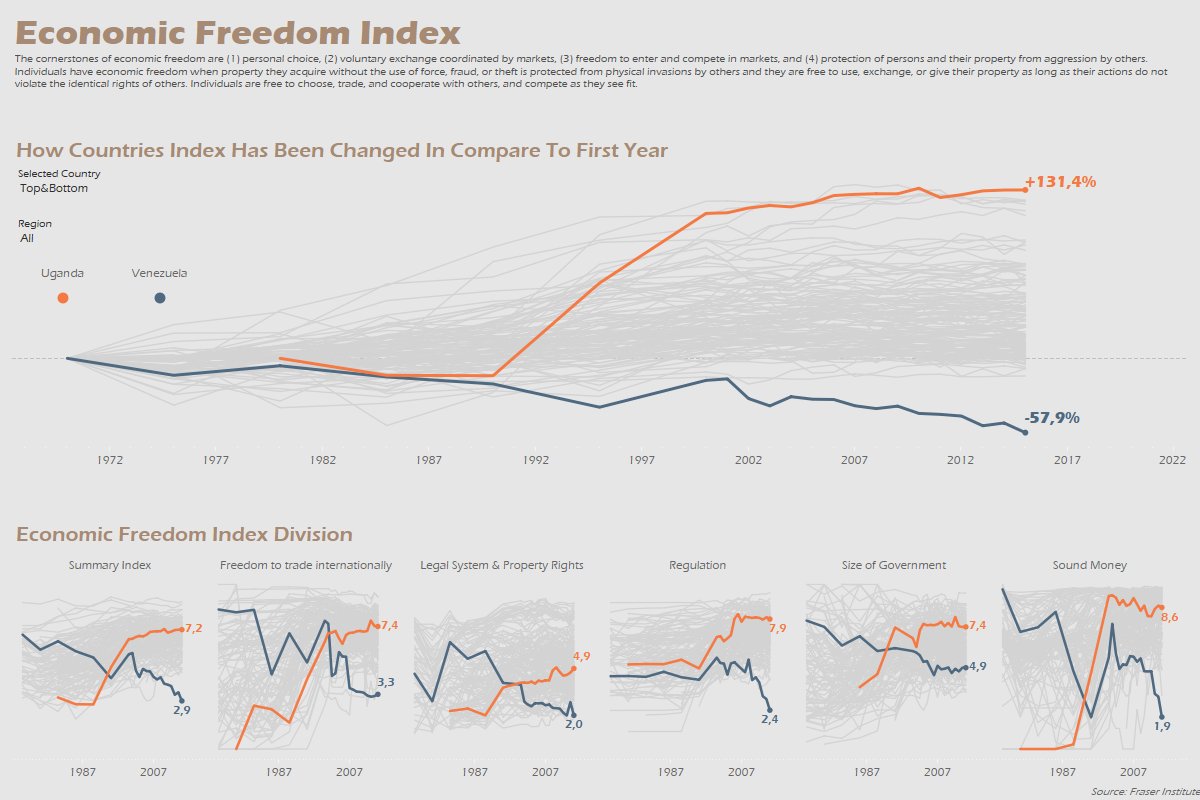 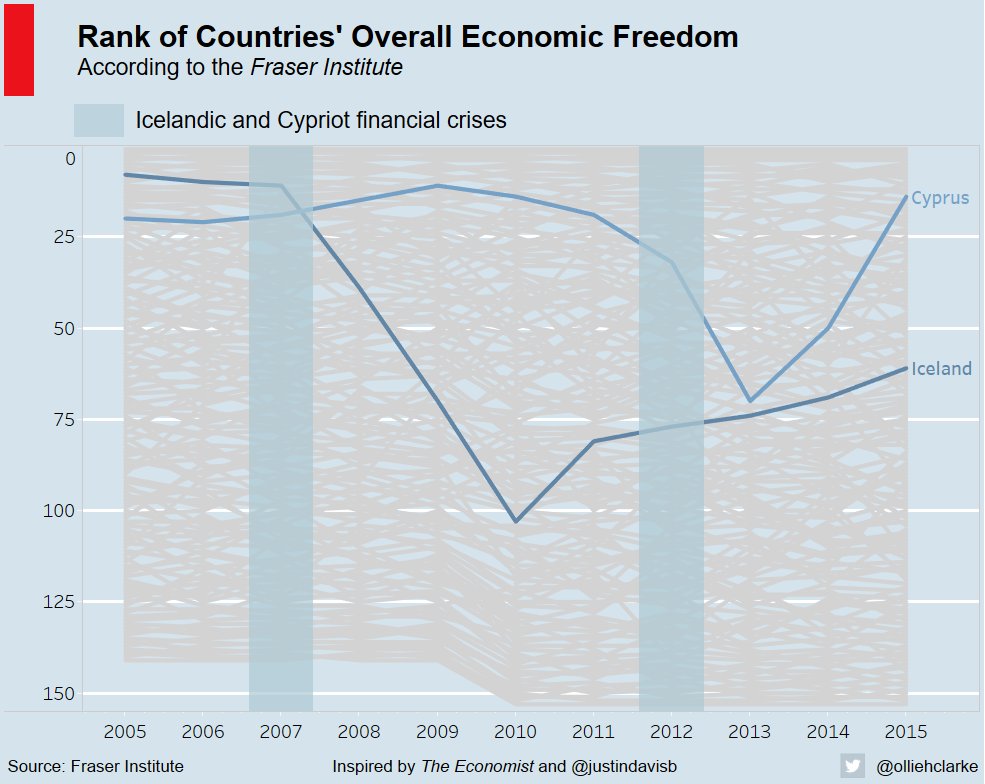 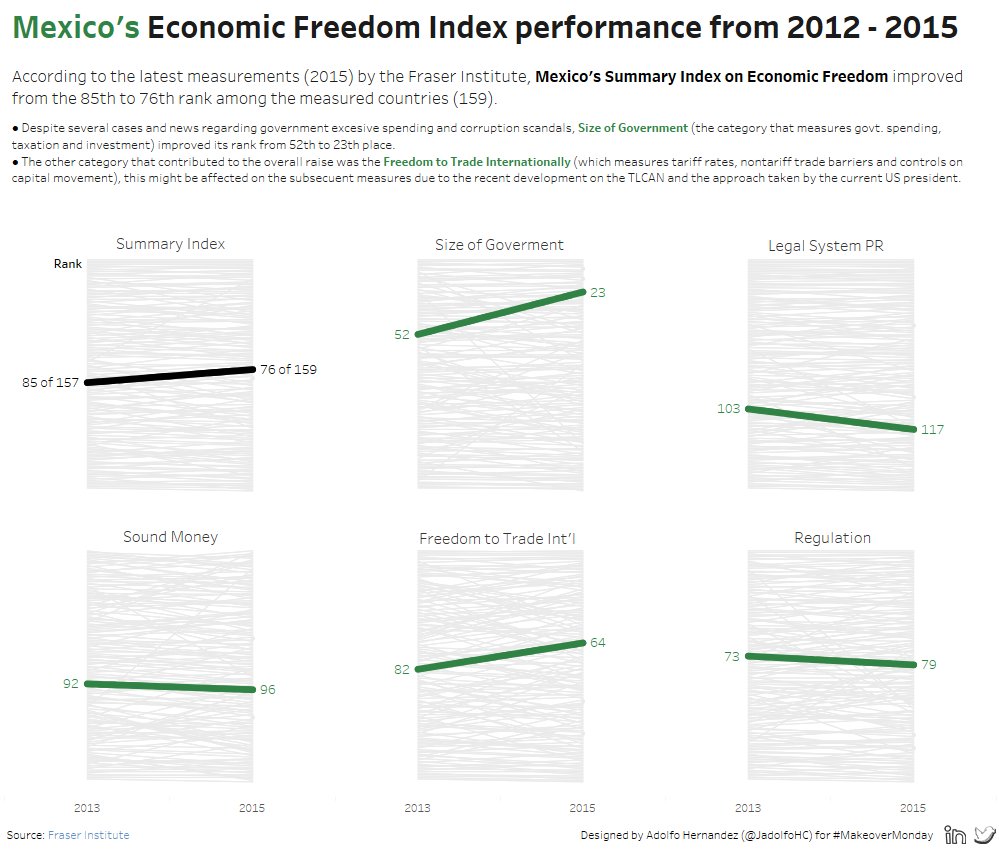 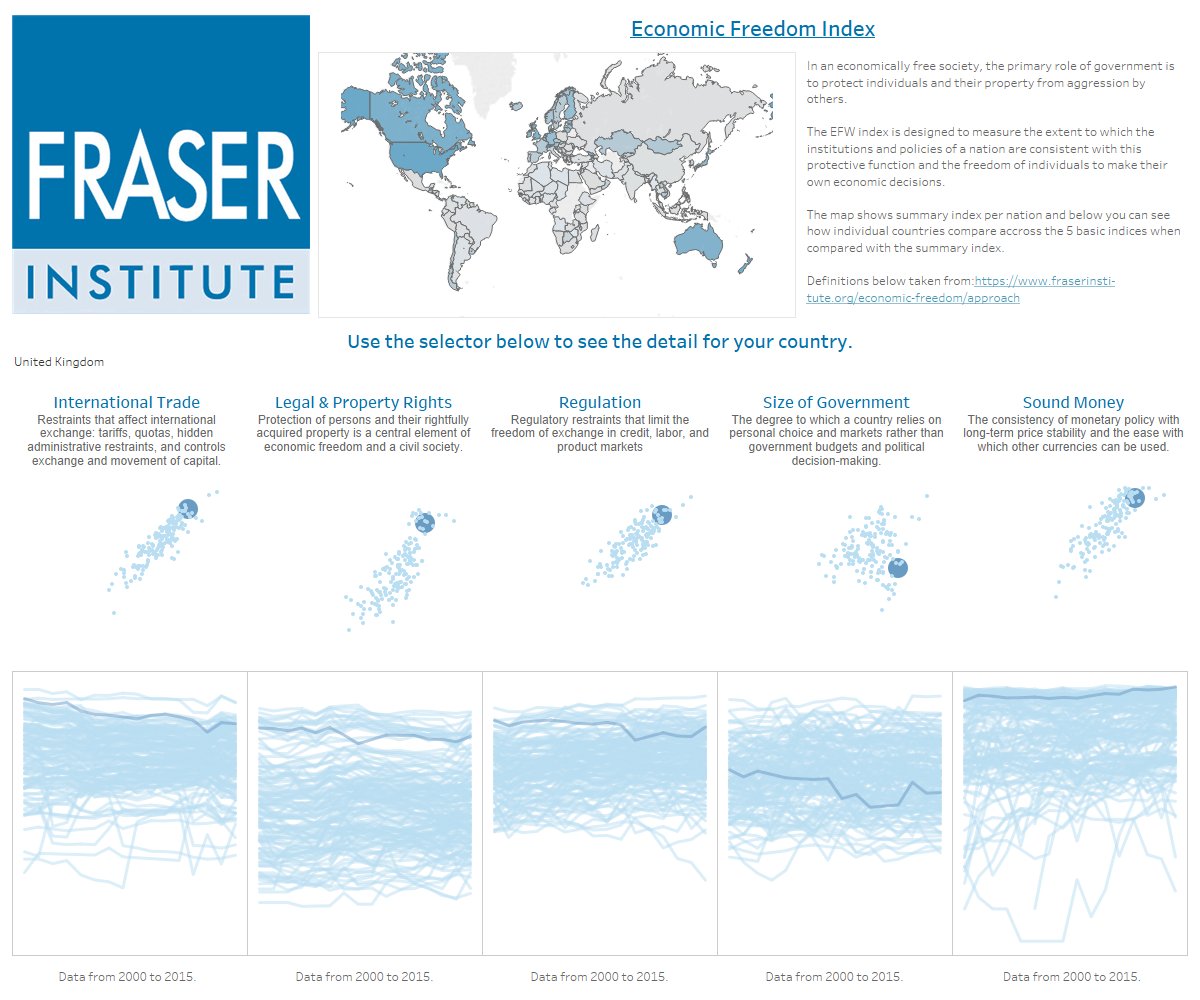 LESSON 2: Measuring Change of an Index

With an index, each value is expressed as a percentage of a base value. In our case this week, the data is on a “scale from 0 to 10 that reflects the distribution of the underlying data.” Great, but what if I want to compare one index to a base year. For example, I want to compare each year in the data set to the first year.

During viz review this week, Eva and I provided feedback on this visualization by Sirish Malisetty: 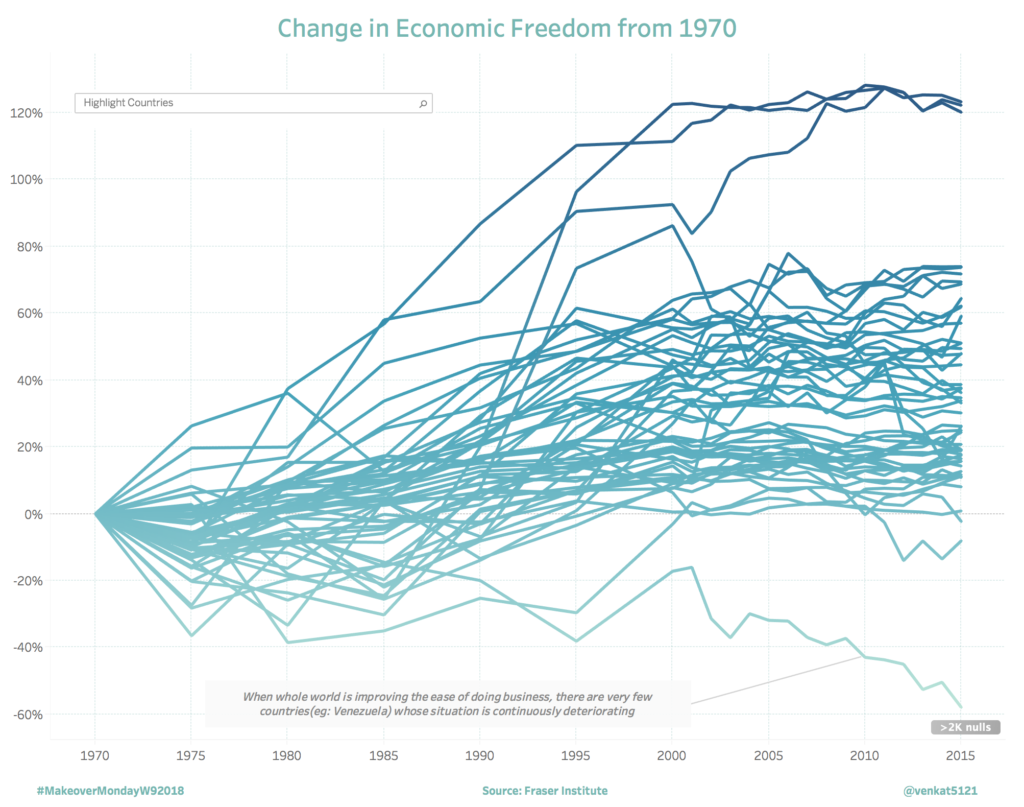 Notice how Sarish is looking at the percent change from the baseline year of 1970. Technically there is nothing wrong with this. The math for percent change is:

Again, mathematically, there is nothing wrong with this. However, I think you should consider the purpose of an index. Indexes essentially have already normalized the data, so I would recommend that you look at change instead of percent change. Let’s compare the charts side-by-side, applying the difference instead of the % difference to Sarish’s viz:

This is quite a difference. It’s typically better to go with a straight difference when

During the viz review, I also made a couple other changes. First, remove nulls from the view. 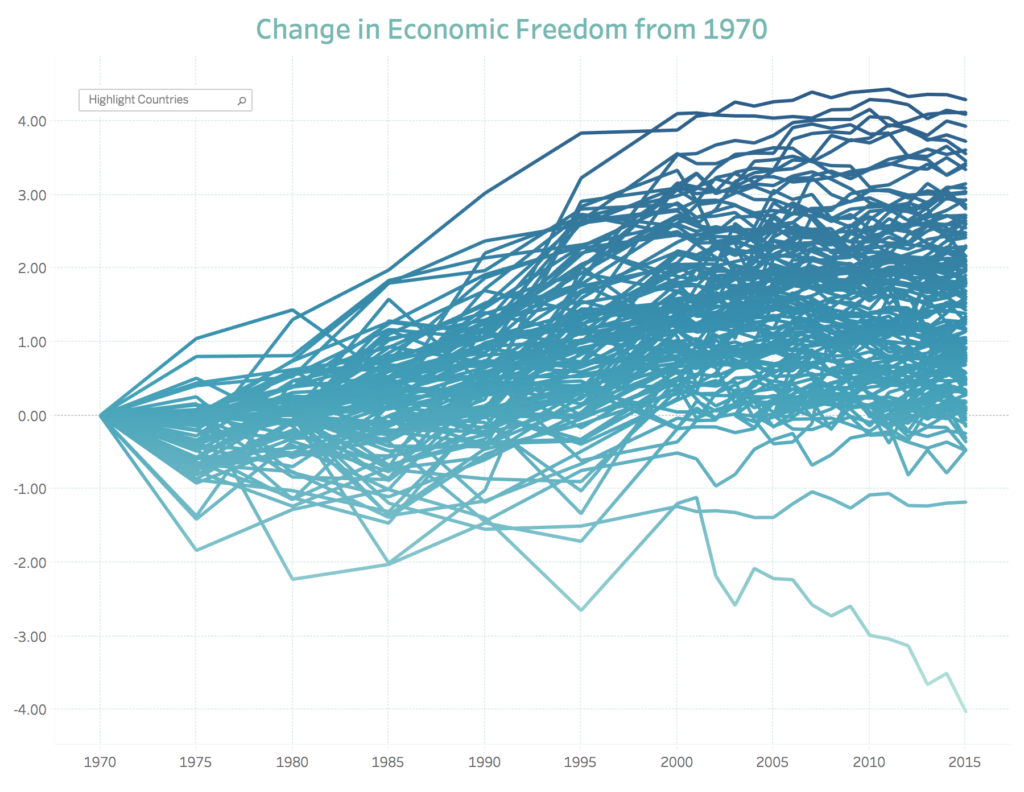 Next, let’s change the colors to a red-black diverging scale since the difference can be either negative or positive and it’s important to be able to see those differences. I’ve also changed the title to black text. Now let’s change the axis formatting to have a + next to the positives, make the lines thinner, and filter the year to start at 2000 since that’s when we have data for every year. The previous periods were only every five years. 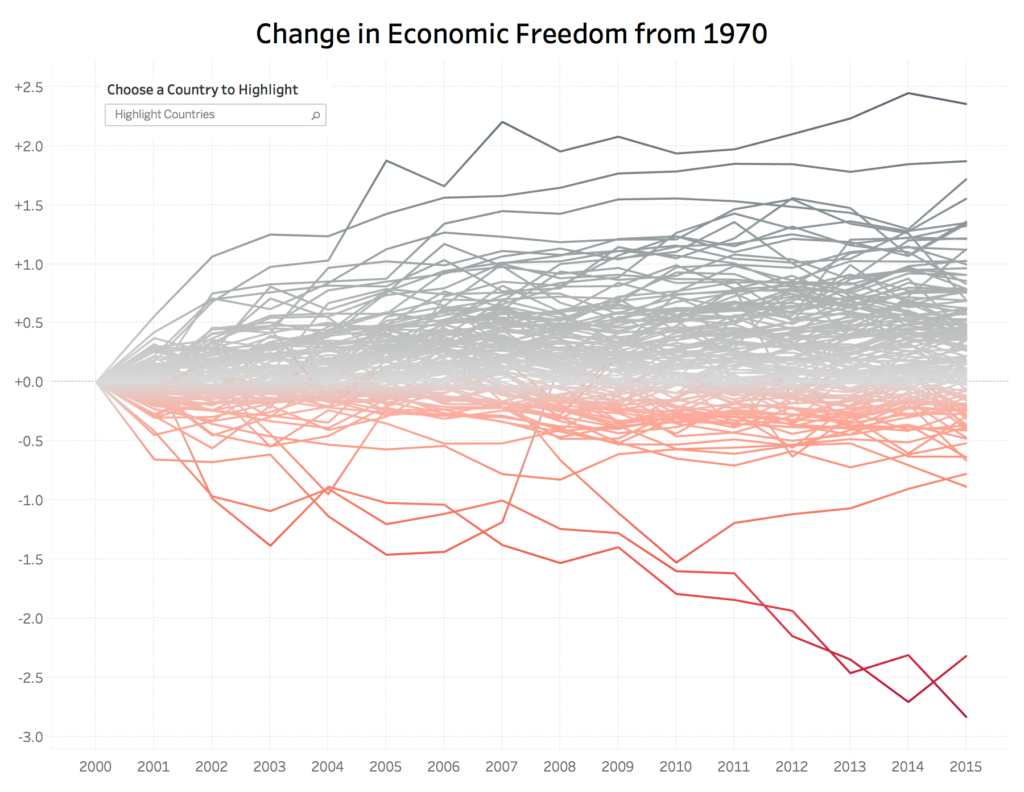 Lastly, keep only the countries that have an index for all 16 years. 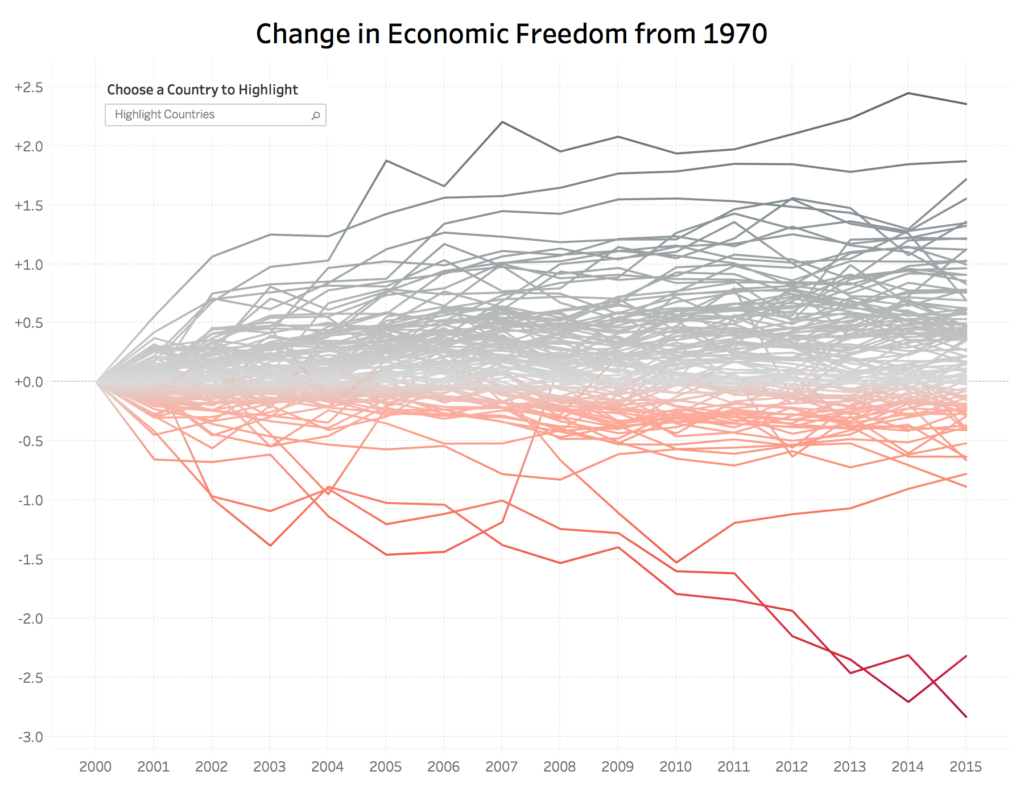 These are all simple changes that, for me, make the visualization easier to understand. Here’s one last look at the before and after:

I’m interested in your thoughts about which approach to measuring change you prefer and why. Tweet me and let me know. 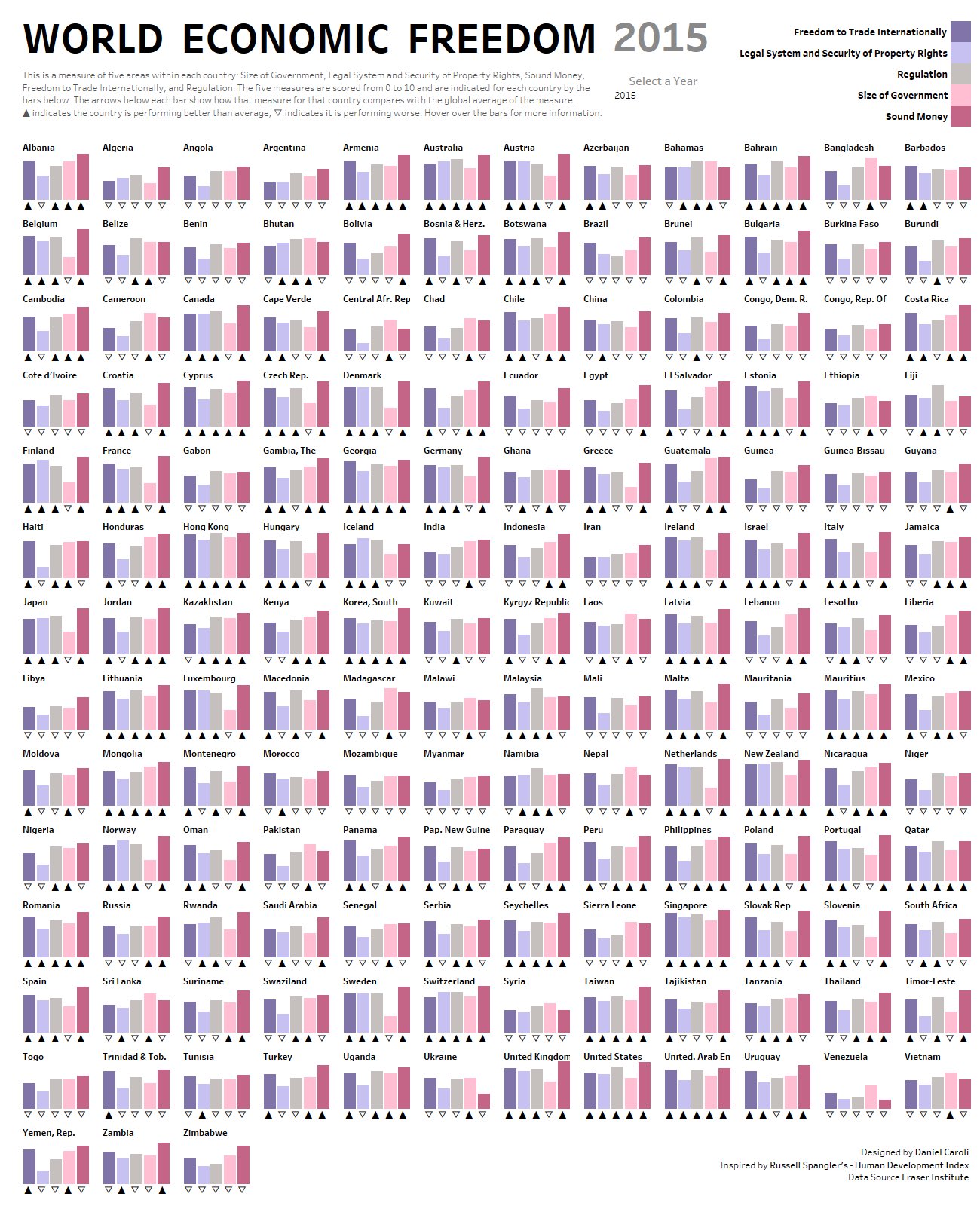 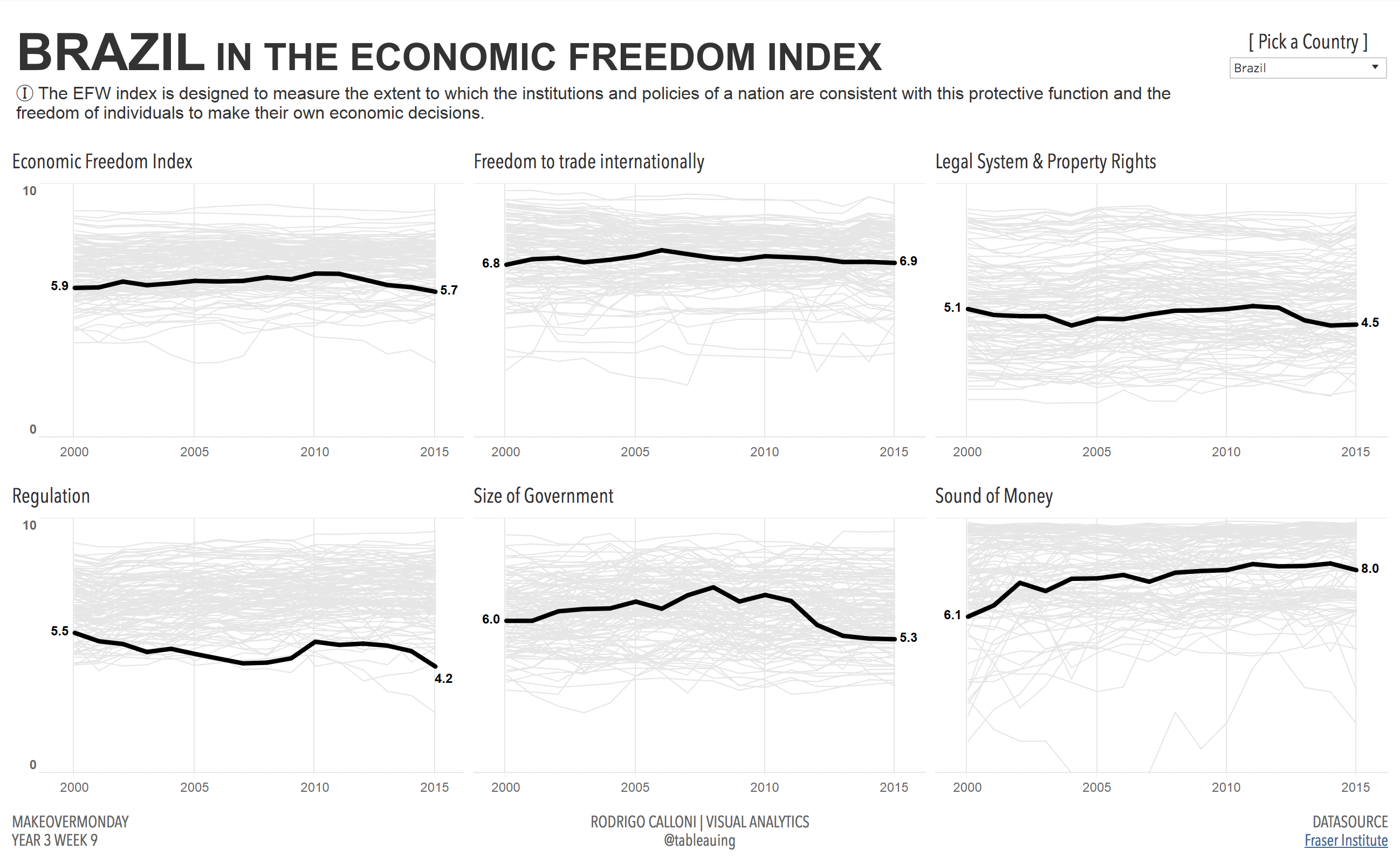 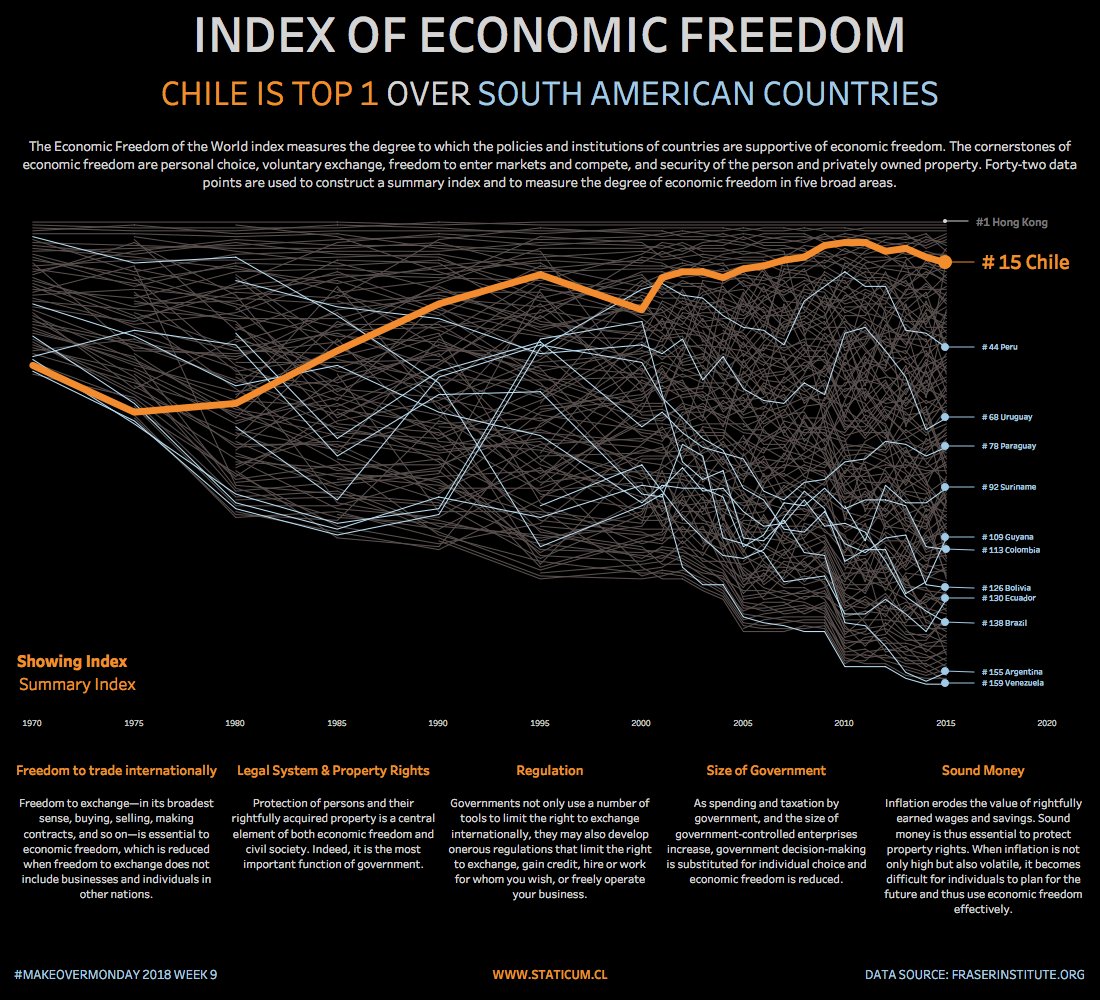 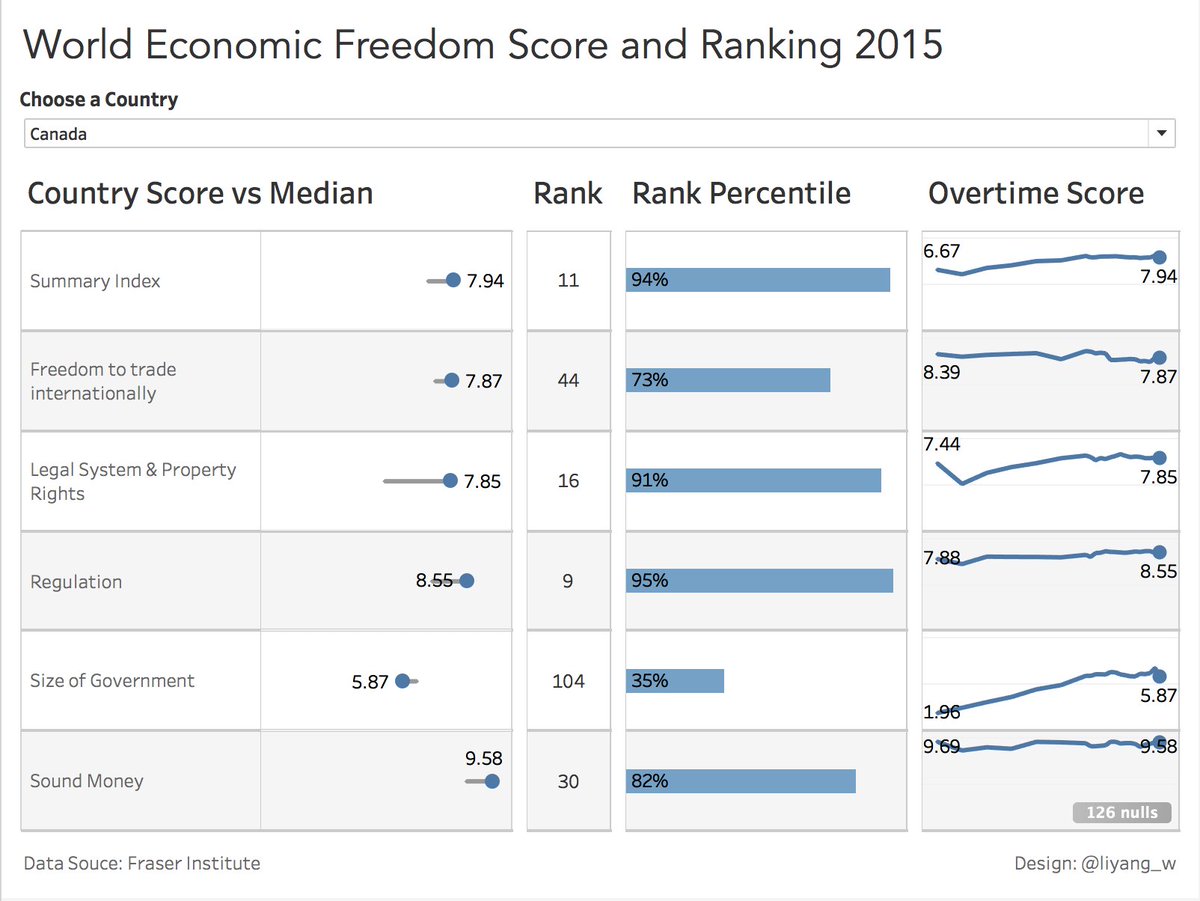 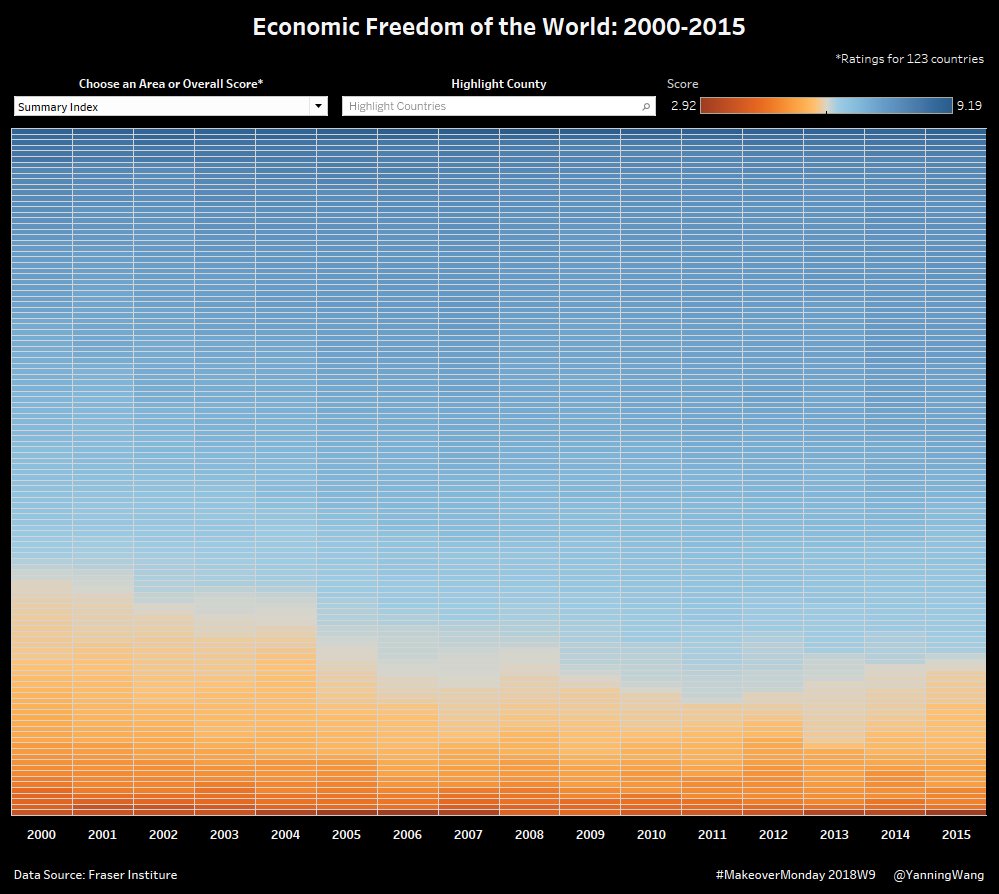 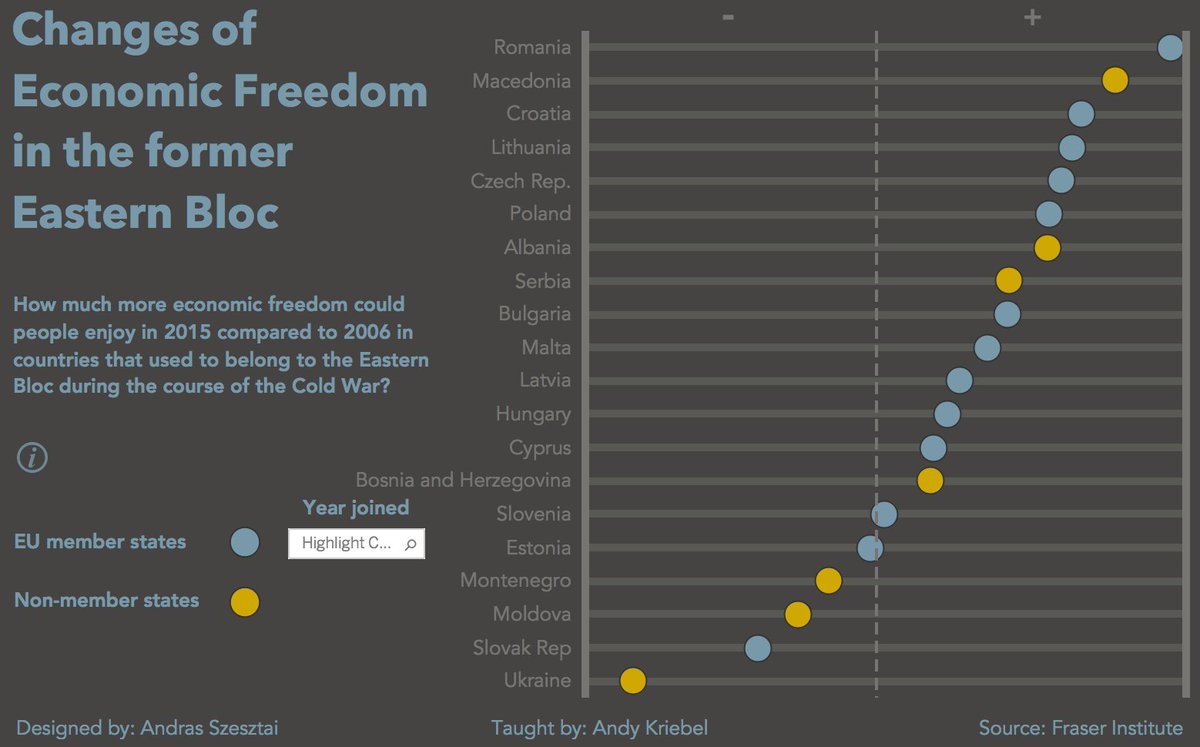