In Week 6 we challenged the community to work with a rather large dataset and create a makeover of a couple of simple line charts that visualised taxi trips and fares for Chicago from 2013 – 2016.
We provided a data extract for 2015/2016 data as well as the full dataset using EXASOL as the back-end database. To be honest, I was completely blown away by the interest from the community in accessing ALL the data and using the database as a playground to analyse 105 million taxi trip records. At the time of writing we had over 180 registrations, which is about 150 more than I expected. Well done everyone and thanks for getting involved in a bit of a novel challenge for Makeover Monday.

Did we see any issues this week? Well, nothing glaringly obvious stood out when it comes to the analysis of the data. It helped that the data itself was pretty straight-forward. We limited the columns to only those that were useful for the analysis (removing empty columns and additional ID fields) and the metrics were easy to understand (fare, tips, extras, toll charges, number of trips…).
One challenge may have been that people who accessed the whole dataset with a live connection often tried putting every single taxi trip on one map. Not a good idea :-), it will take an hour or so for Tableau to render 105 million marks on a map, so my advice is that you filter the data first when it comes to the visualisations. For example, pick a single day (Christmas day, New Years eve, etc.) and start from there.

What I really enjoyed seeing was people going through iterations with their vizzes, trying one way and taking feedback on board to produce an even better visualisation afterwards.
I certainly noticed a step-up in the quality of vizzes and people taking the opportunity to practice crafting a story around their charts, which is great. There were sporting themes, tipping analysis, people focusing on geographical areas and particular holidays or events.

It was really difficult to pick favourites this week and I have decided to make it a little easier for myself by having 2 categories: Live data and extract vizzes. The extract category contains vizzes that were built on the extract we provided with 2015/2016 data, while the live data category is for everyone who used ALL the data in their makeovers.

As a small incentive and as mentioned in the announcement blog last Saturday, the favourites in the live data category will feature on EXASOL’s Tableau Server, visible on the EXASOL website so that viewers can interact with the viz. We will also produce a webinar with those authors, so well done to everyone who took on the challenge.

So let’s look at this week’s favourites, starting with the live data category… 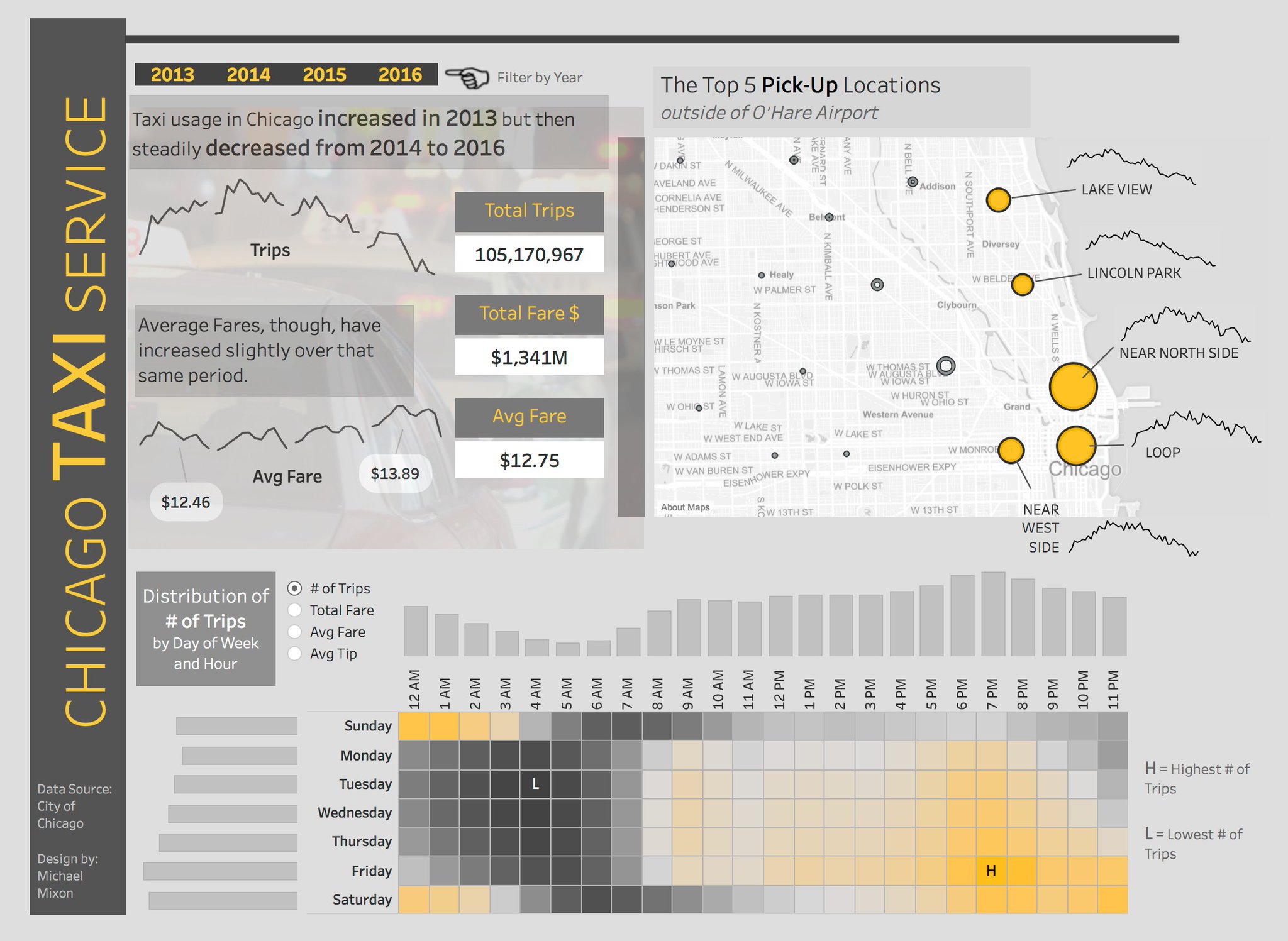 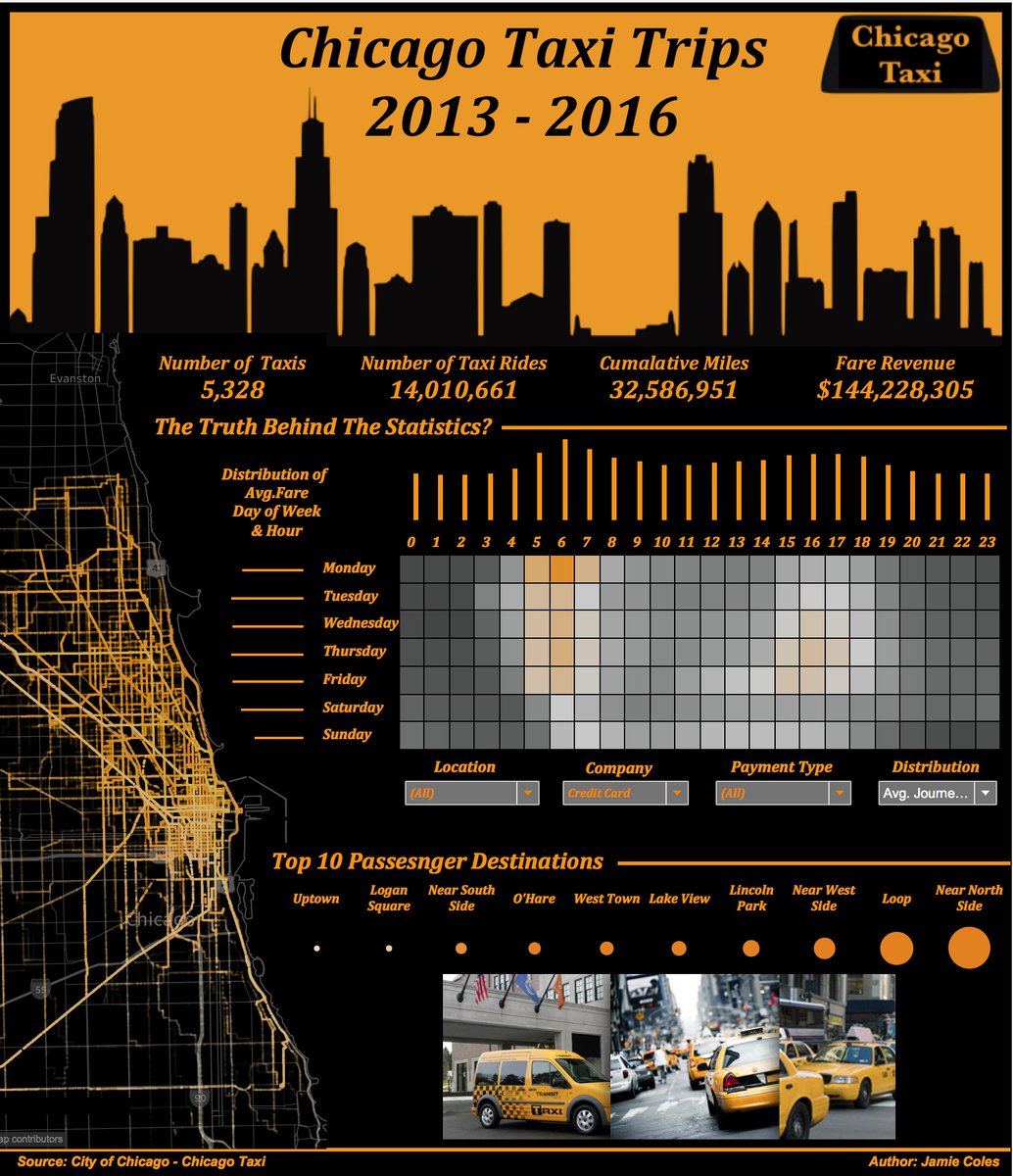 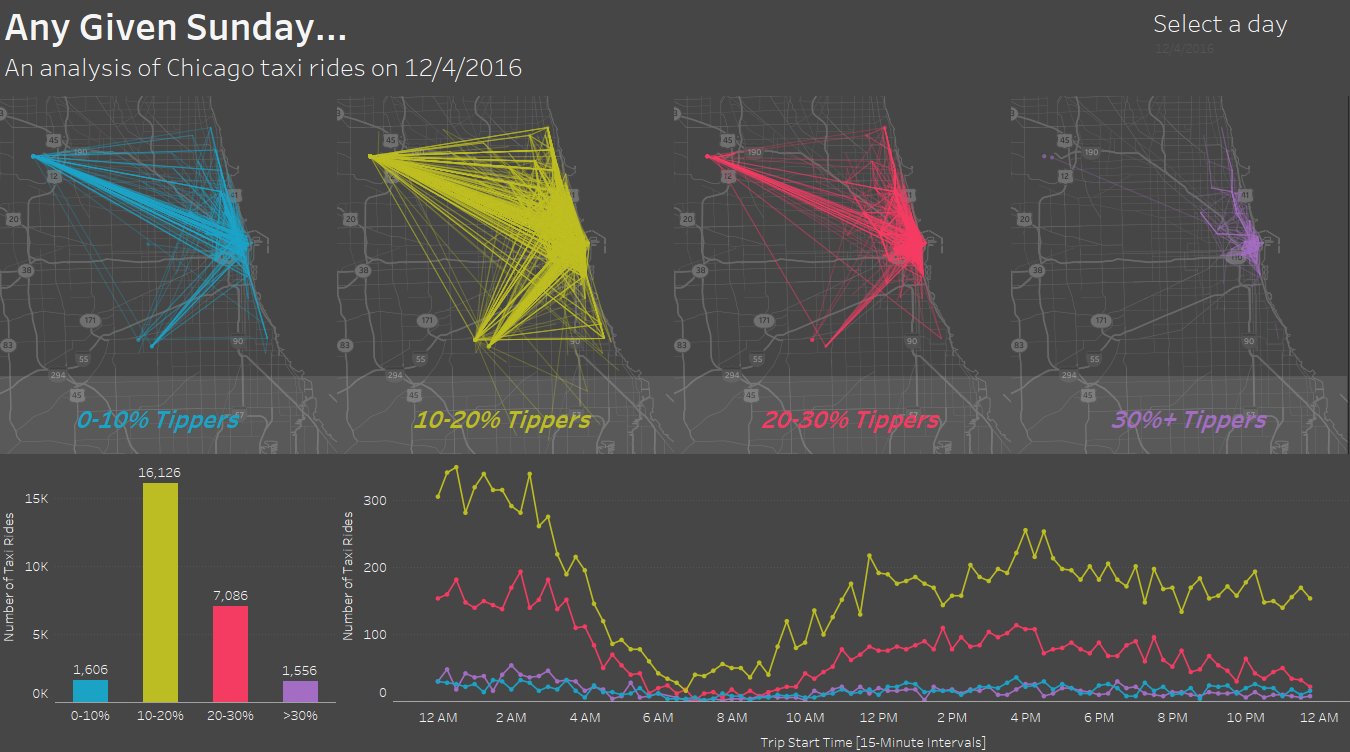 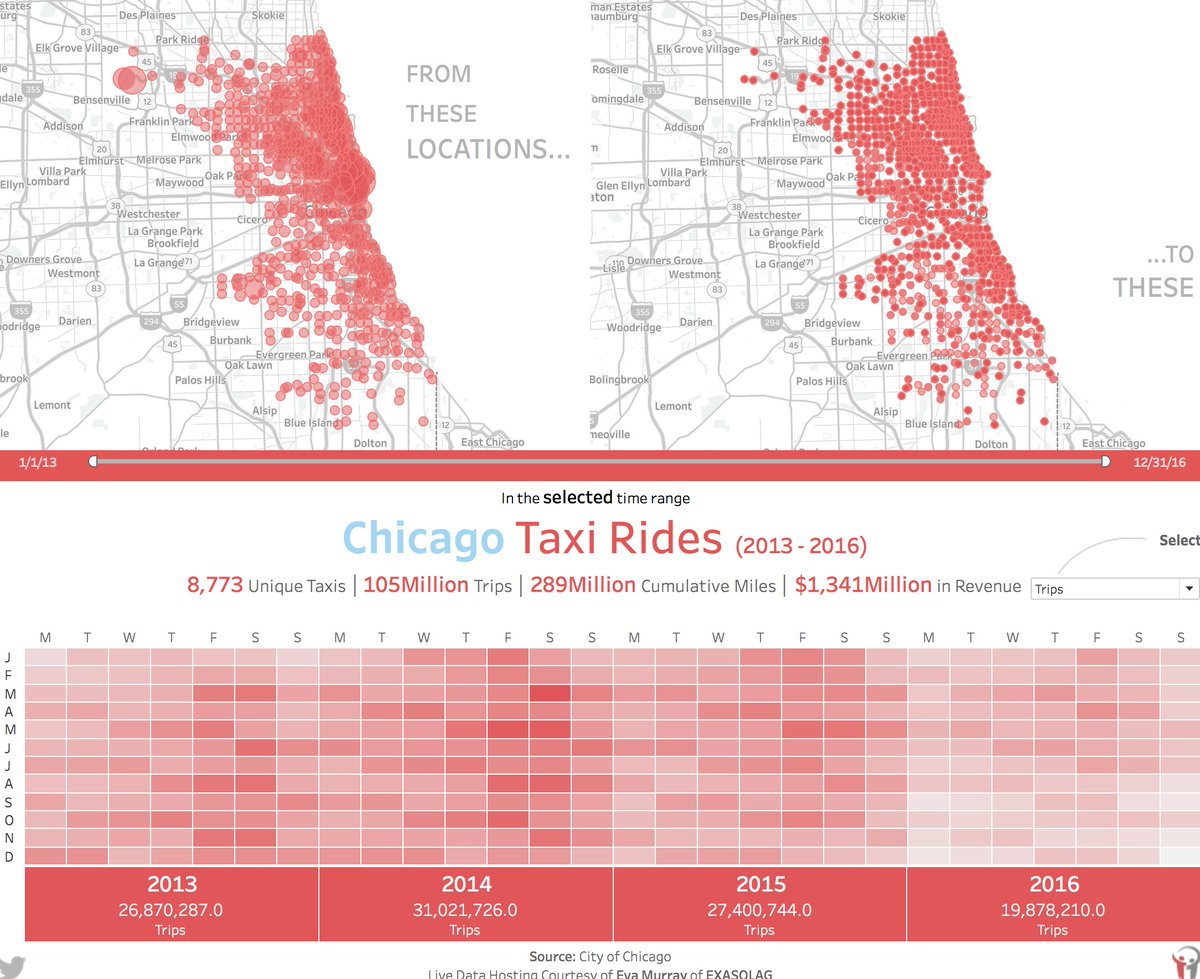 Following are my favourite extract vizzes. These authors used the 14 million record extract we provided, which included data for a single pick-up area (Near North Side) from 1 Jan 2015 to 31 Dec 2016. 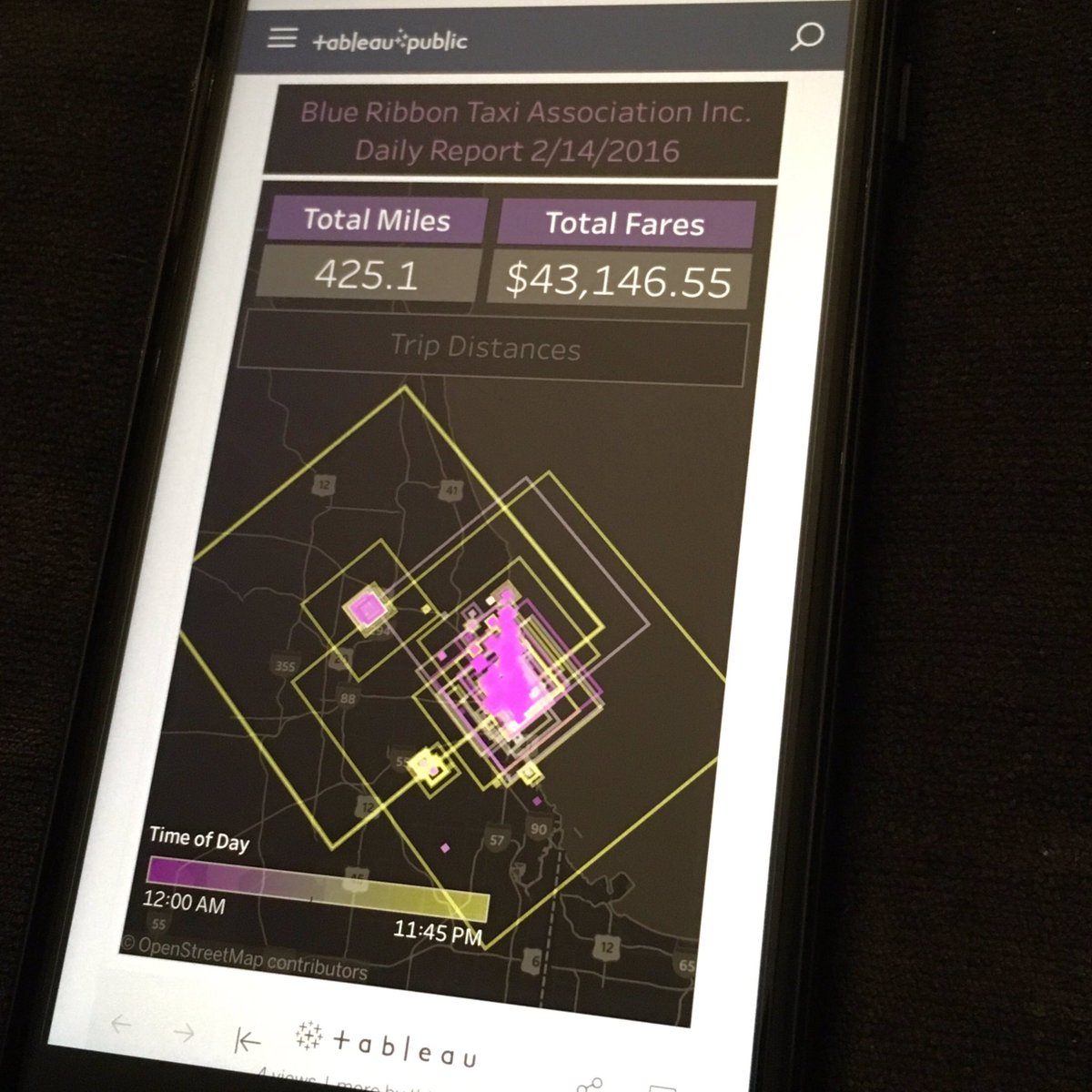