Another plea deal this week, more Trump controversy. Seemed like a good time to look at money spent at Trump properties during the presidential campaign and since Trump became President.

This week we also partnered with #WorkoutWednesday. Their challenge was the rebuild the original viz in Tableau. Get the requirements and a tip on their website.

LESSON 1: MAKE THE DATA THE FOCUS

Given all of the funny images flying around the internet about Trump, I wasn’t at all surprised to see his face featuring prominently in some vizzes. However, the point of data visualization is in the first word…data. To communicate data effectively, the data must be the focus on the visualization. If the audience’s eyes are drawn to something other than the data, then you probably didn’t communicate it well enough.

Consider this viz by Alexander Varlamoff: 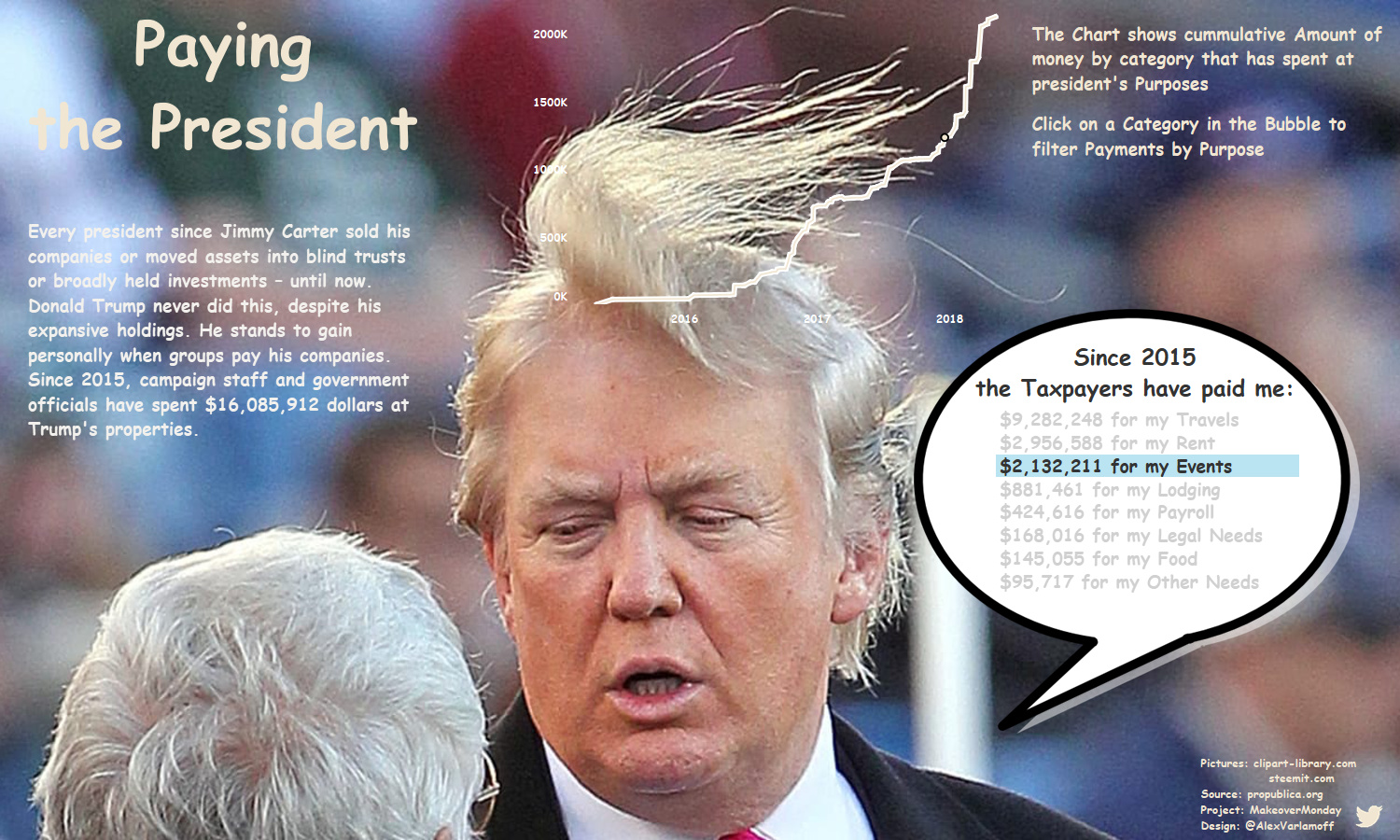 What’s the first thing you see? Trump, right? What next? The big speech bubble? Then what? The text on the upper right? Where’s the chart? Oh there it is, hidden in Trump’s hair.

My point is that the data is too far down the list of things you see. It should be first. Yes, Alexander is trying out the transparent sheets feature, but still, the data should be the focus. You can barely see the chart. Which leads me to wonder what it’s even about.

LESSON 2: USE DONUTS FOR PARTS-TO-WHOLE

Donuts charts are pie charts with a hole in the middle. That means they serve the same purpose as a pie chart; they are used to represent contributions to a total. This week, Dilesh Wakwana used a donut chart to represent milestones, that is, they have no “value” associated with them. 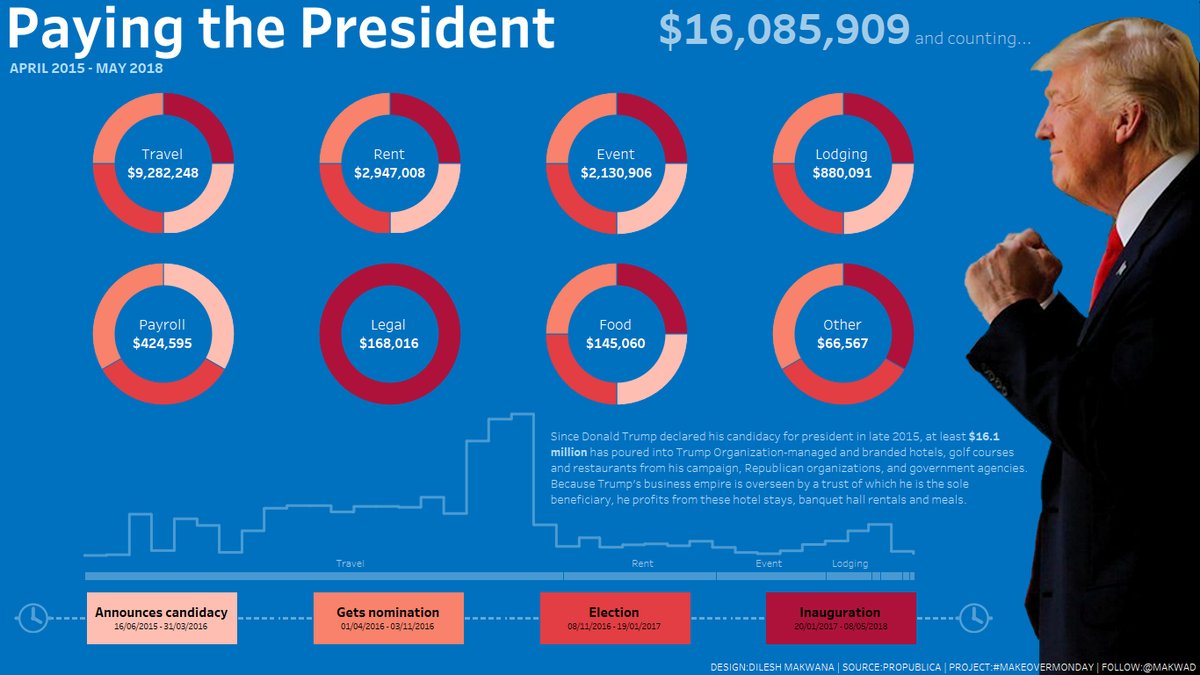 When I looked at his viz, I assumed that each segment of the donut was 1/4 of the total, except for one that was one color, and two others that were three equal segments. I don’t get it at all. For example, the upper left donuts has a value of $9.2M and four segments, leading me to believe that each of those colors represents 25% of $9.2M. But they represent milestones.

Huh? Keep it simple. If the color of a donut doesn’t represent a proportion of the whole, there’s a better choice you can make. Gantt charts, line charts reference lines, reference bands, annotations…they all work better to identify milestones.

Now here are this week’s favorites. 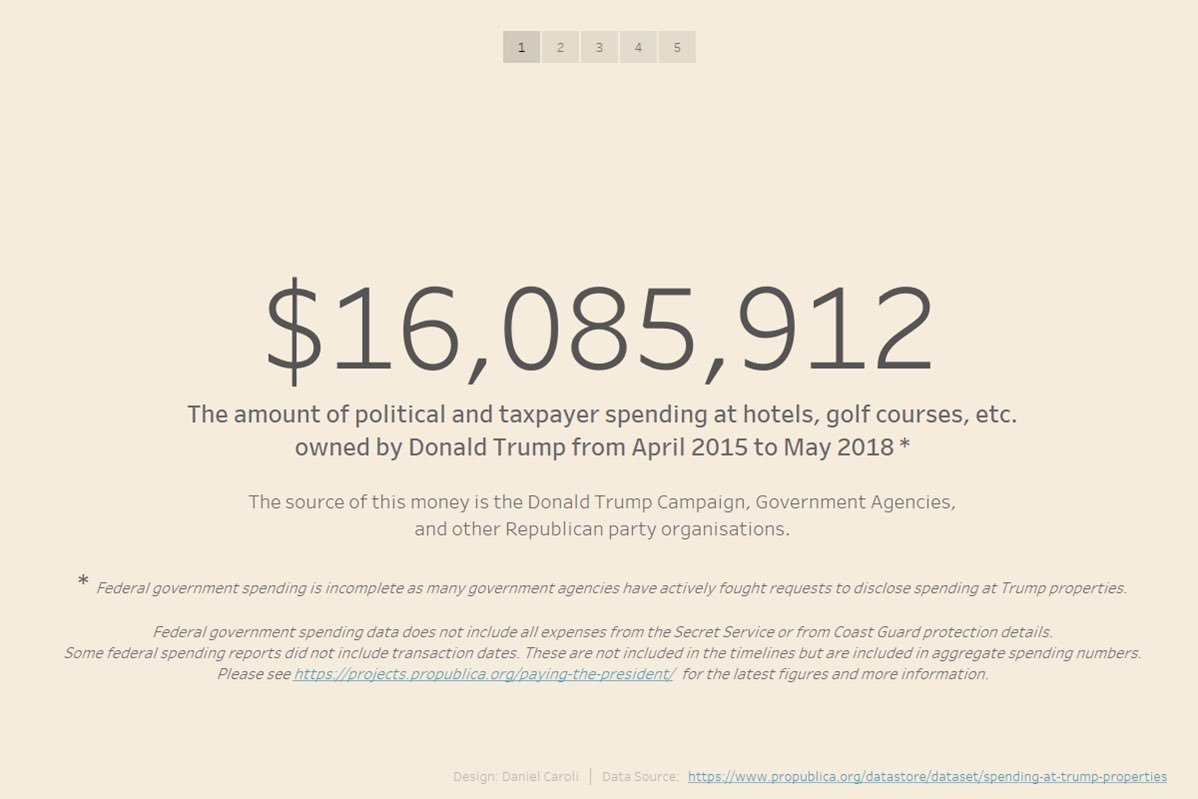 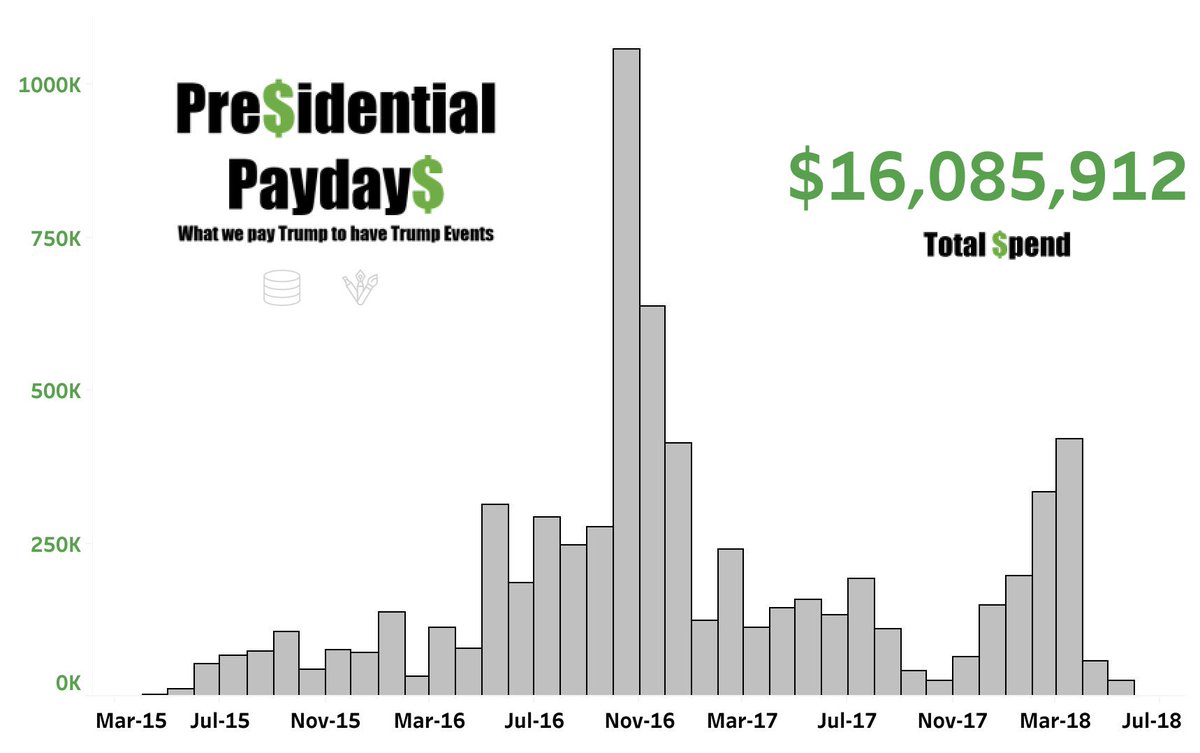 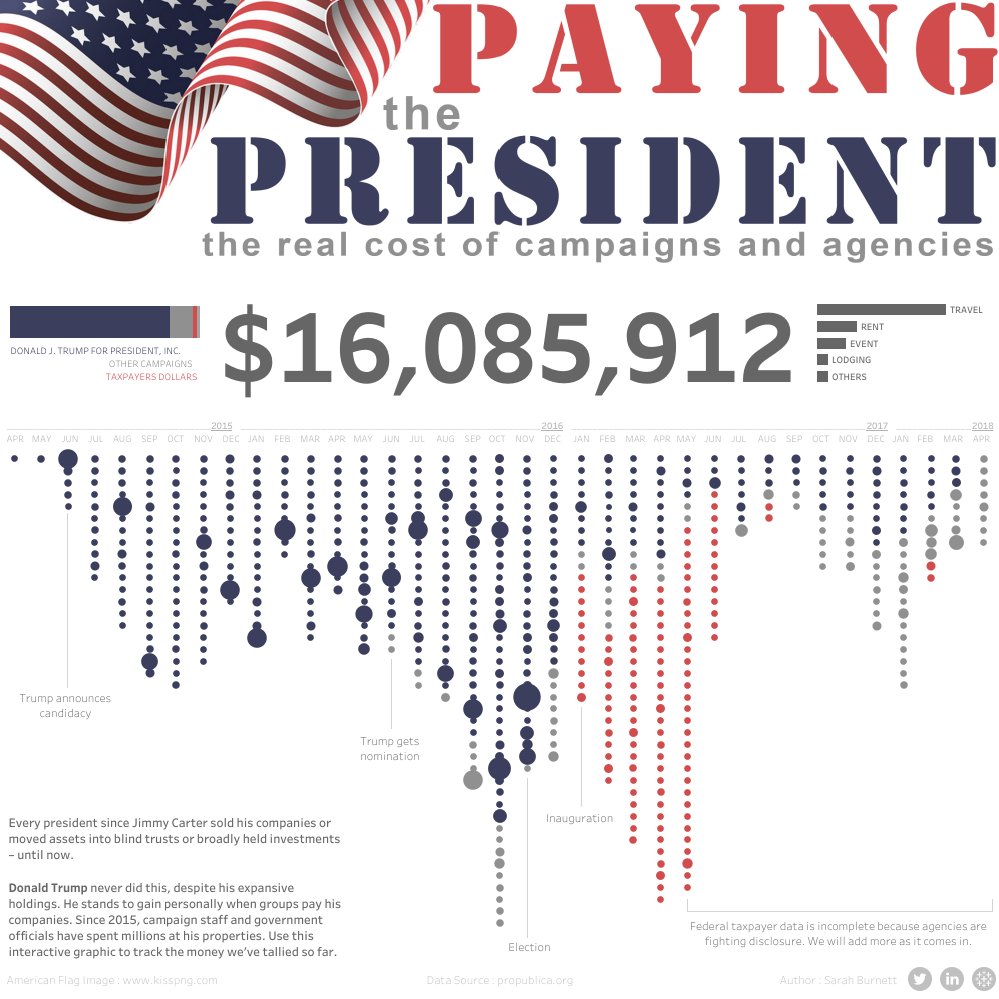 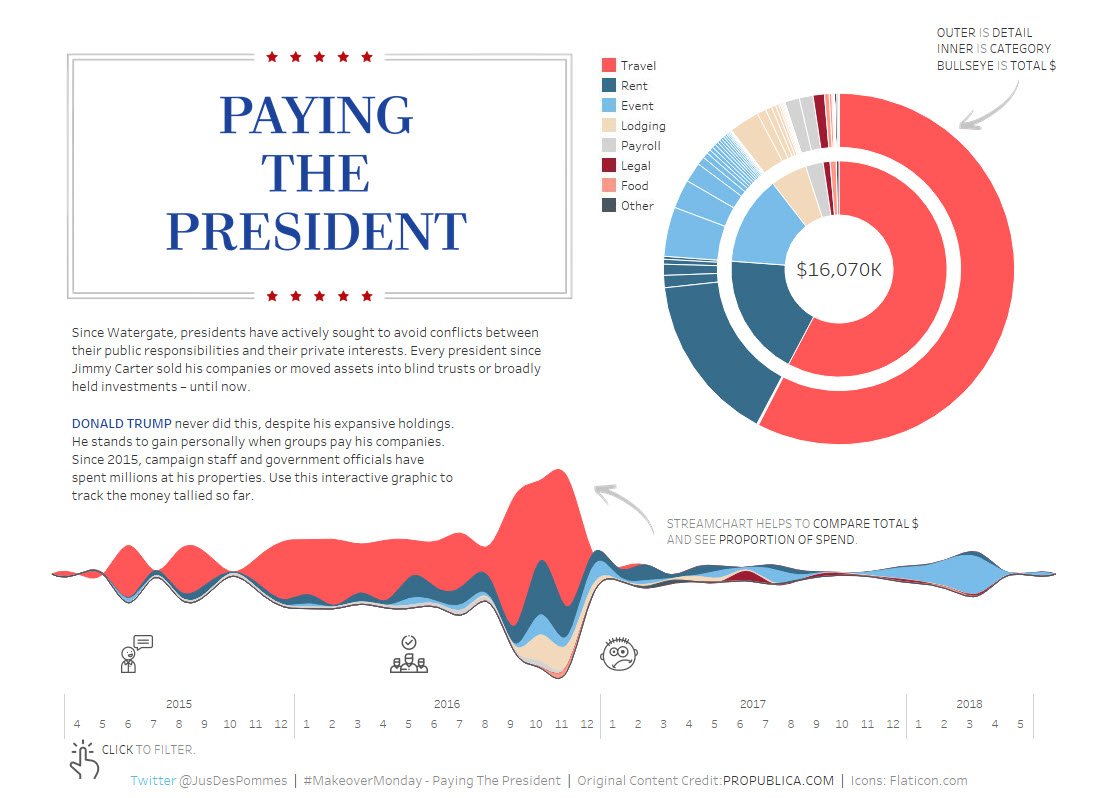 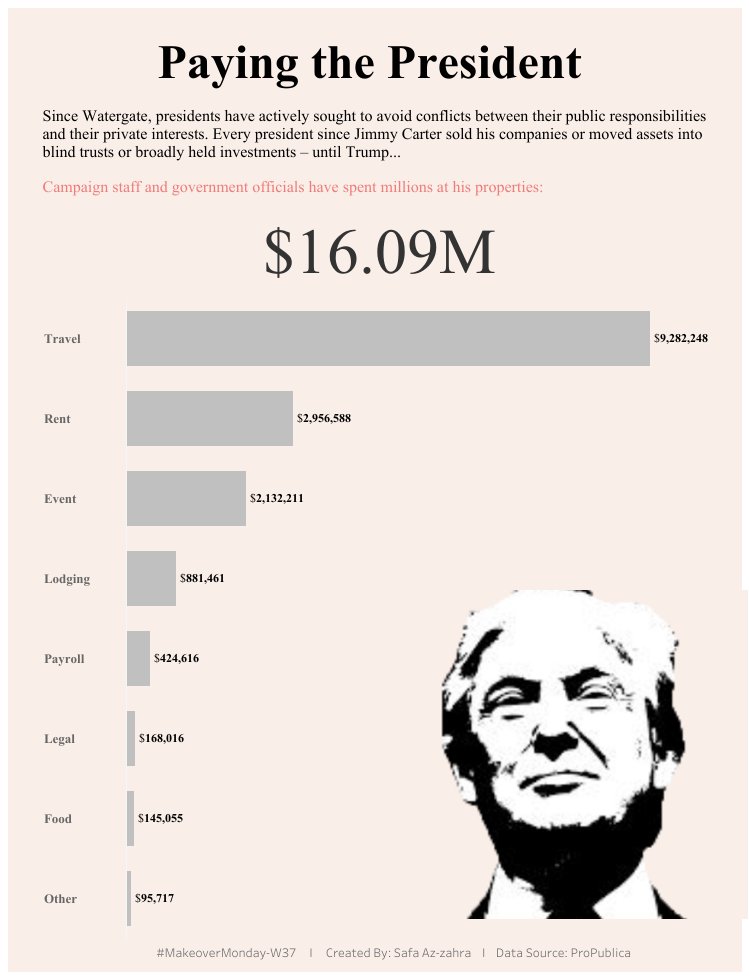 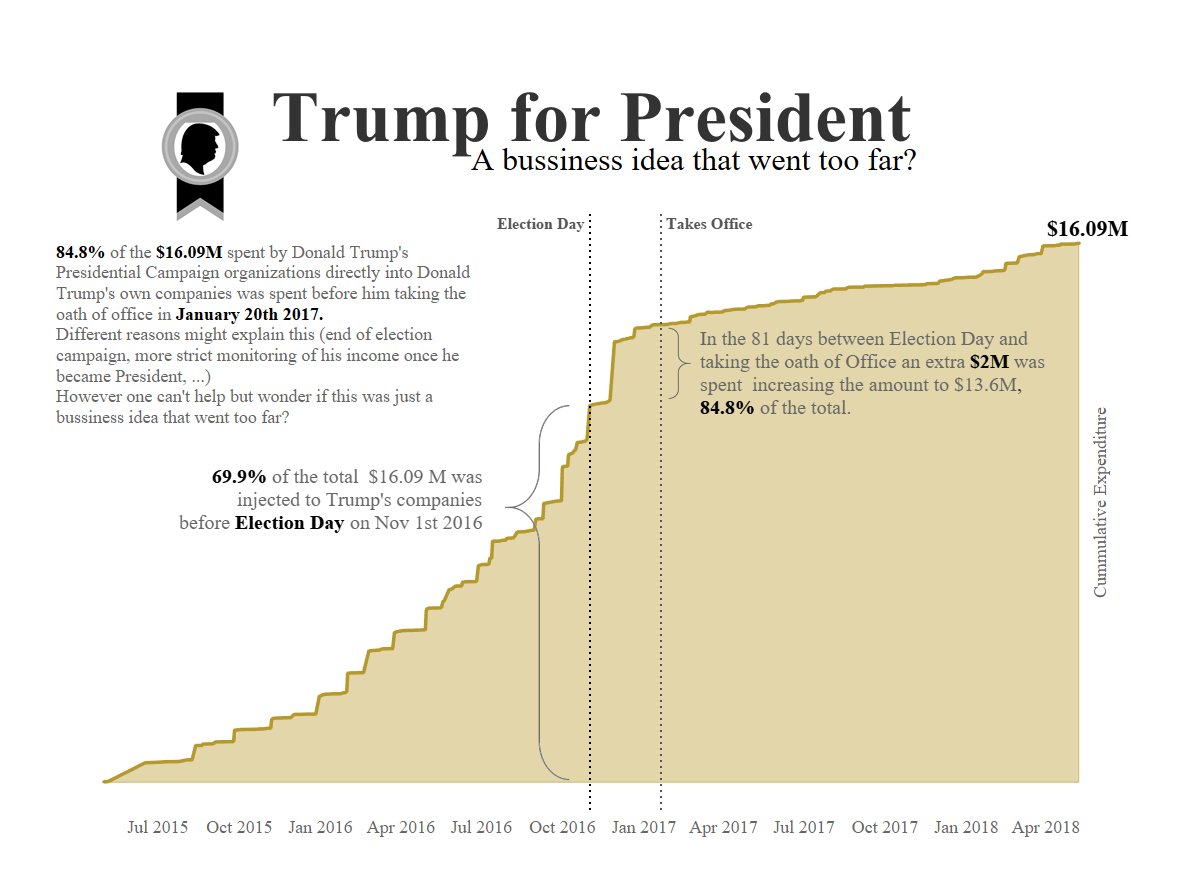