As the wider dataviz and Tableau community this week collaborated with ACLED to bring clarity to crisis through projects like #WorkoutWednesday, local TUGs and a hackathon, #MakeoverMonday also formed part of the collaboration efforts to help the team at ACLED crowd-source ideas to bring their data to a bigger audience.

The enthusiasm the community brought to this dataset was great and I’m glad these collaboration efforts draw people who may otherwise not participate.

The primary theme of the week were maps. Lots of beautiful and thoughtfully designed maps with different color schemes to reflect the nature of the topic.

Something I particularly enjoyed was seeing Mark Bradbourne‘s ‘pixelated’ map, quickly followed by his blog post on how he created it. And shortly after there were numerous submissions using the same approach. Learning doesn’t get much quicker than that! Thank you Mark for inspiring a lot of people, helping them learn a new technique and giving us a great viz too! 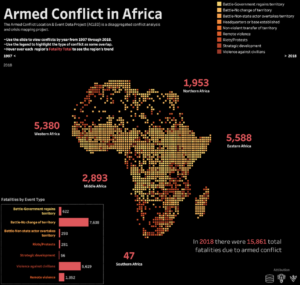 In general, we noticed many really good submissions. What made them stand out was their focused storytelling, attention to detail and overall design but also the analysis that supported the key messages. It becomes obvious very quickly whether people took the time to look carefully at the data and the lower level of detail before putting together their visualizations.

What was also great to see is the effort of many participations to create a visualization that appeared to be one single piece of information and design rather than a collection of charts. These types of designs, where everything works well together, were very prominent this week.

Color and color choices made a big difference this week, because the topic of the data was a sombre one, dealing with crises, conflicts and deaths. I would argue that, at least in Western cultures, bright ‘happy’ colours like green and blue and pink don’t lend themselves very well to the theme of death and destruction. There are of course exceptions but in general the commonly chosen palettes of yellow to orange and red and brown shades worked well on dark backgrounds, resembling fires, explosions and alarming events. Earthy tones like muted greens, reds and greyish blues also seemed appropriate.

A couple of examples of color used well for the topic came from: 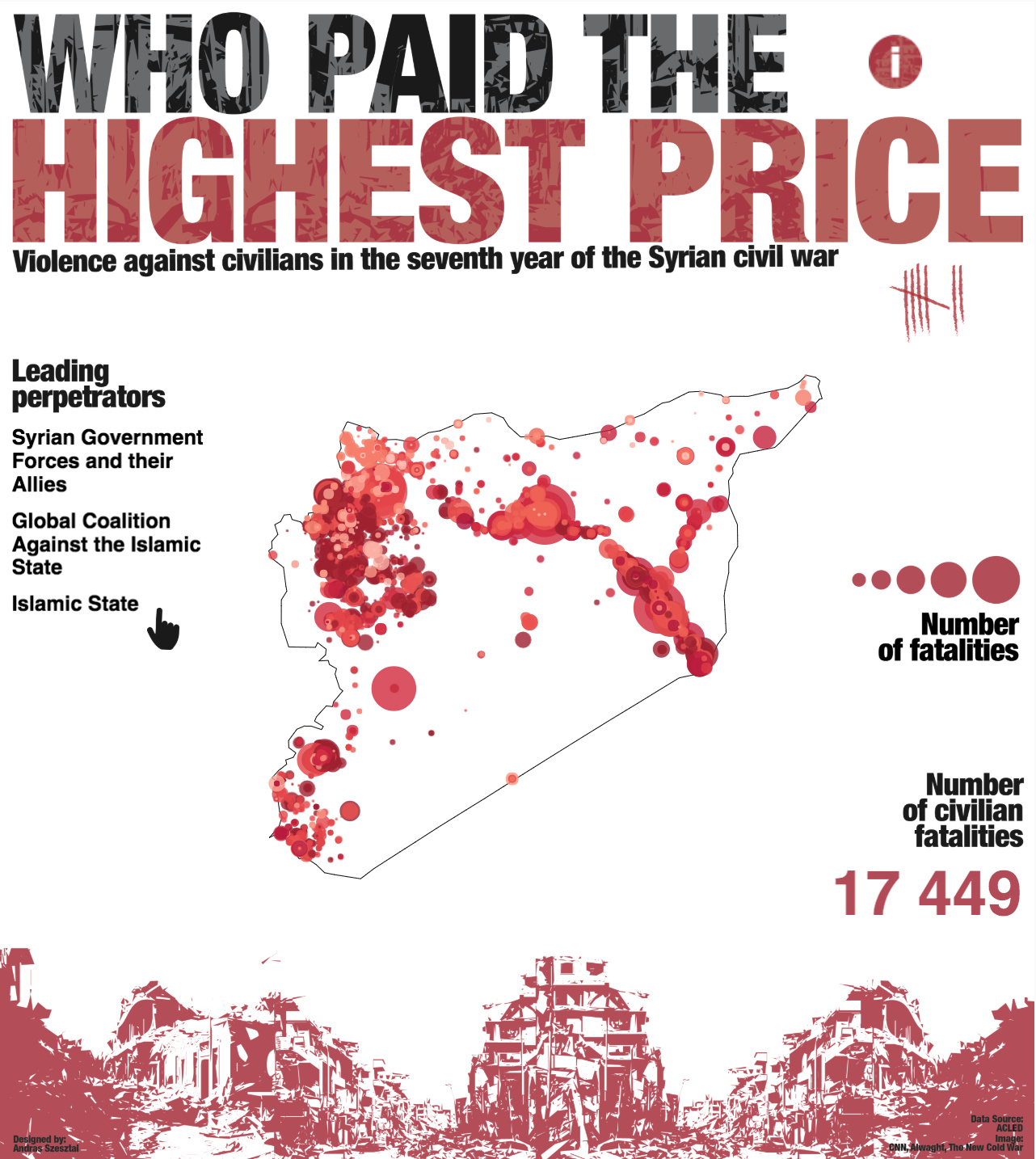 When you use colors for visualizing a topic that is as emotional as wars and conflicts, I recommend to give careful consideration to the choice of palette. There are probably suitable palettes in your dataviz tool of choice. If not, then check out this page with 100 sample palettes you can use or simply search for color palettes on google or Pinterest. Both websites have great results that should have you covered.

LESSON 2: FINDING A STORY OR FOCUS

It can be difficult to decide what you want your key message to be, especially with a rich dataset that provides multiple angles for analysis. Your viz can be impactful whether you develop an overview dashboard across the entire dataset or a focused story for Syria. There are a few nuances to take into consideration, however, to ensure that your work is understood as a coherent, well put-together piece of analysis and visualization rather than a collection of random charts.

Let’s look at an example of a high-level dashboard summarising the dataset well. This visualization comes from Soham Wadekar who used the original color palette which closely resembles the color blind friendly palette in Tableau. 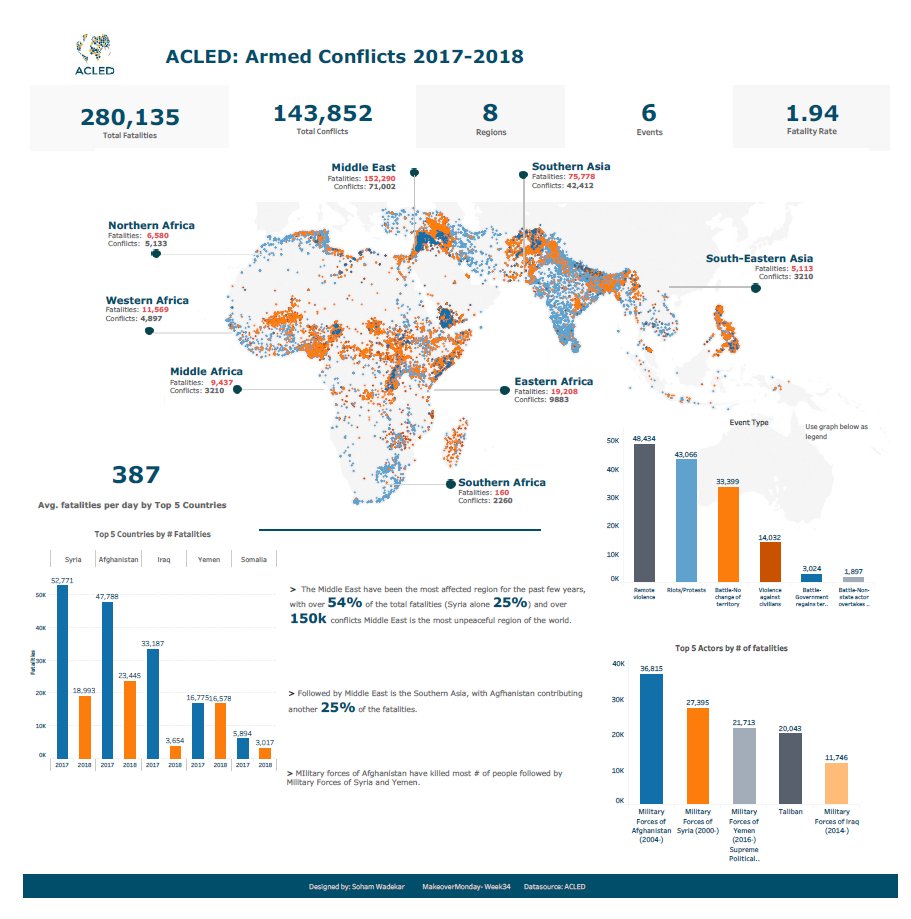 Why this works for me is because the map forms the central element highlighting the affected areas. This is essential the scope of the data and from there comes the detail. Annotations of the map show number of conflicts and fatalities, giving context for each country. High level BANs at the top aggregate the data into all deaths, conflict events and the number of regions across which they are spread.

Soham also included a number of charts and insights at the bottom of the viz, providing a more granular view of the different types of conflicts and how they relate to fatalities. A solid overview of the dataset.

A different take on the data comes from Soha Elghany who focused purely on Syria. 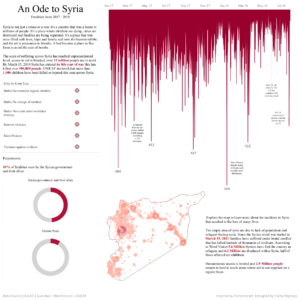 Why this works for me is because I can give my full attention to the message of Soha’s story. There is an impactful visual with the timeline of fatalities in deep red, supported by annotations, explanations and a map highlighting the many conflict events the small country has experienced since January 2017.

When you create a focused visualization with a subset of the data you typically bring out more detail, find some interesting insights to share and thereby inform your audience, elicit a response perhaps or at least make them think. In an overview dashboard you typically have less detail but need to pay closer attention to having one coherent design that makes all parts look like a complete whole. 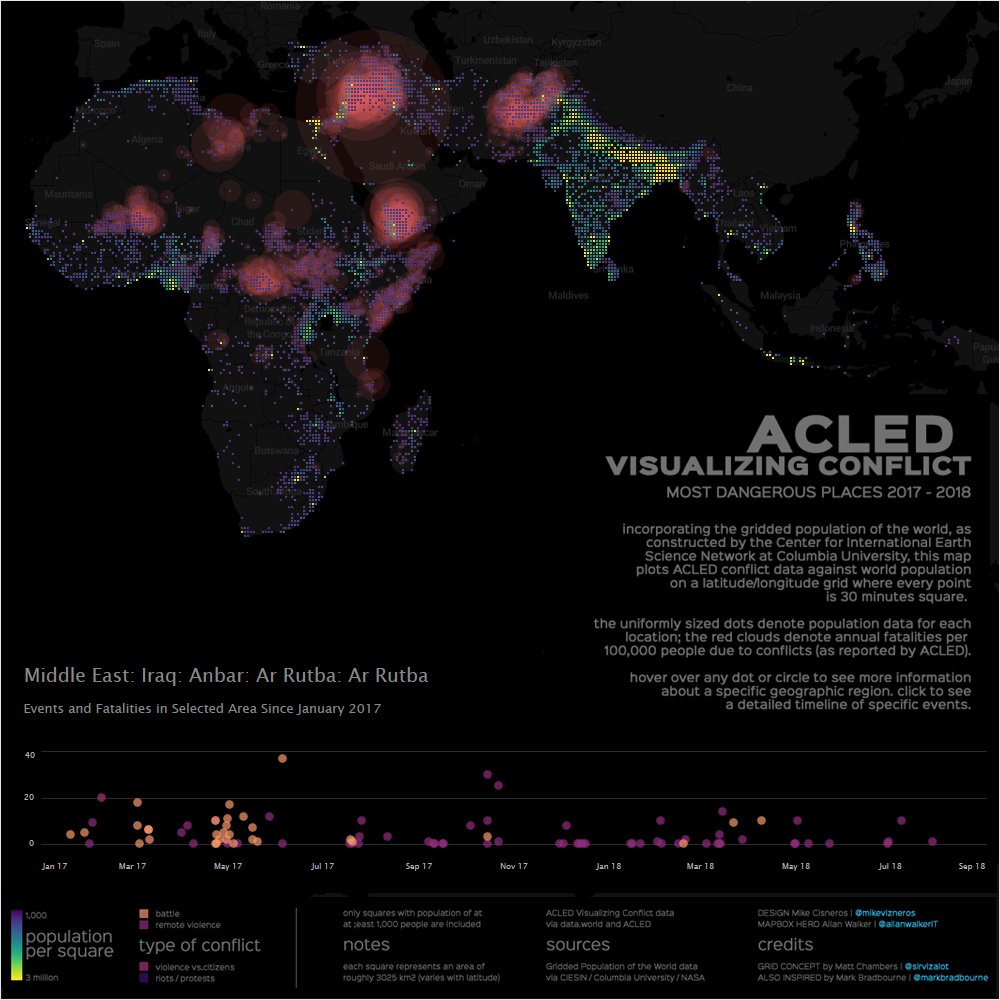 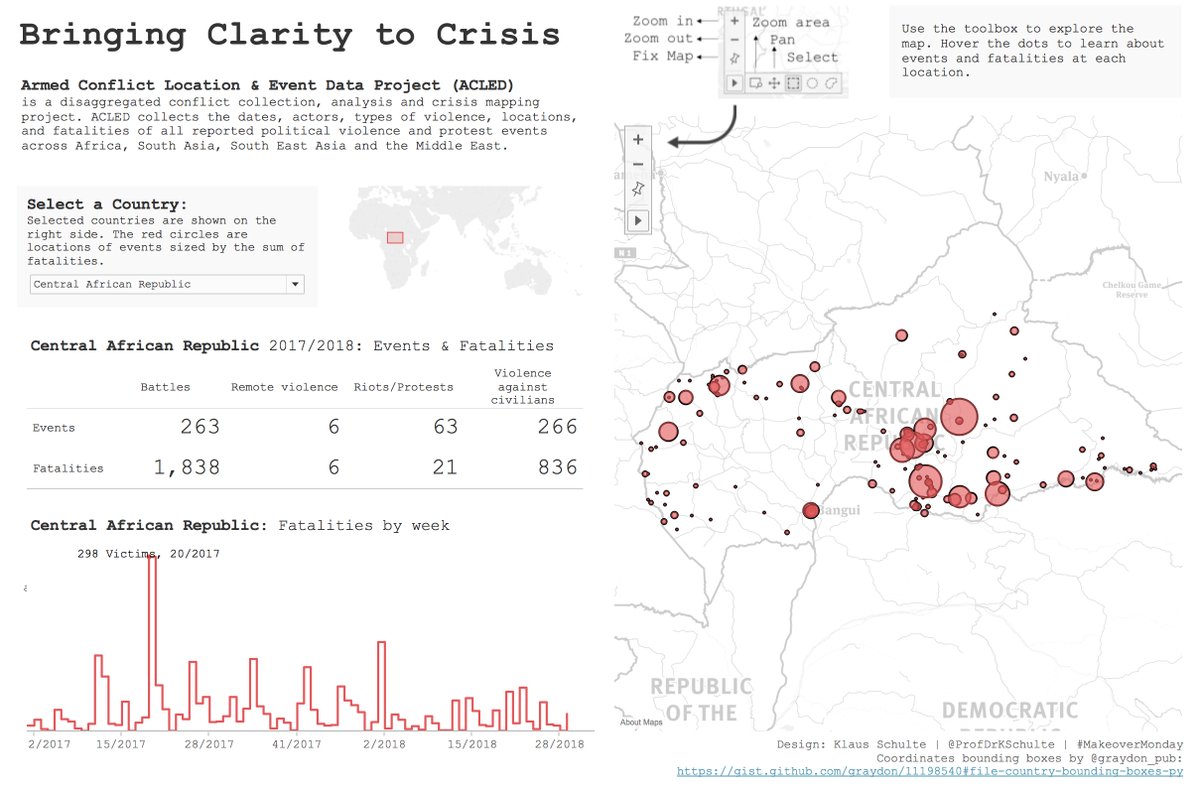 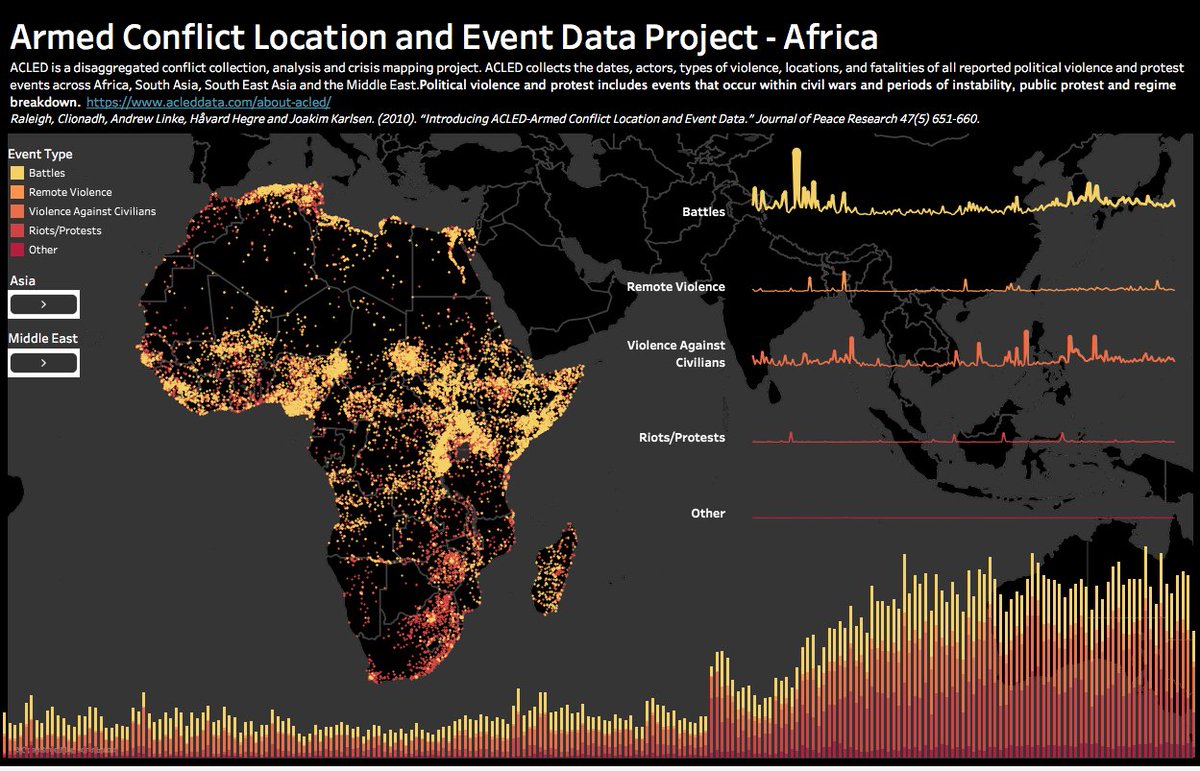 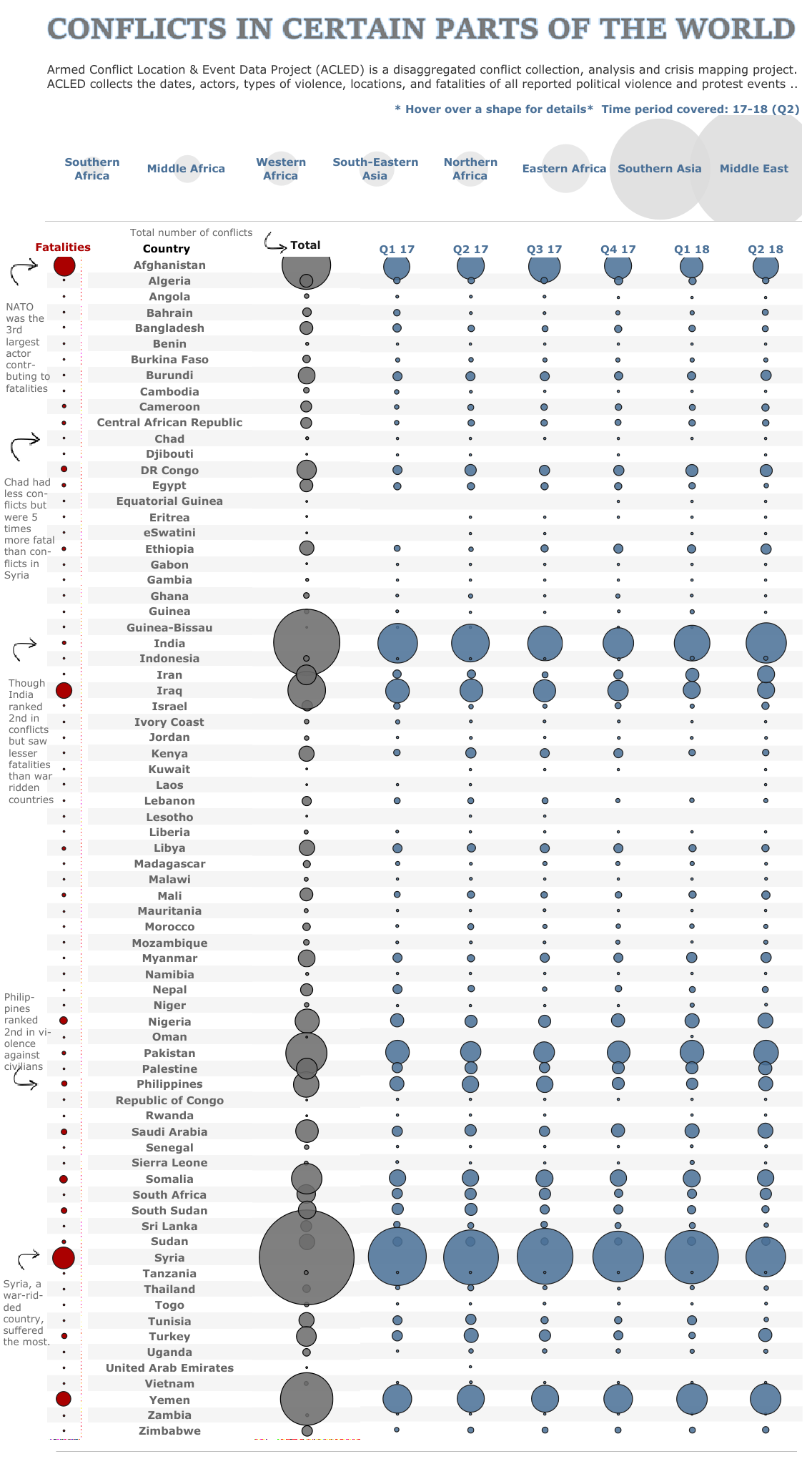