Week 31 was a collaboration with The Economist and if this data set looks familiar to you, that’s because it was used for Iron Viz Europe earlier this summer. Thank you to Andy Cotgreave for coming up with the idea for this collaboration and his support to see it executed.

The data set we used was The Big Mac Index, a methodology The Economist first developed in 1986 as a way to compare currencies around the World. The idea is that a Big Mac is the same wherever you go, therefore, exchange rates will, in theory, adjust accordingly. As we all know from this data, that isn’t the case.

This week’s lessons will focus on attributions and the purpose of a makeover.

LESSON 1: GIVING ATTRIBUTIONS TO THOSE THAT INSPIRED YOUR WORK

On the Tableau Wannbe Podcast (listen here), Matt, Emily and I had a detailed discussion about people attributing their work when necessary and not stealing others work. I feel like I made my opinion pretty clear, knowing full well that someone is likely to download my Visual Vocabulary workbook and re-upload it as their own. Sadly it’s inevitable and it was good to FINALLY get clarification on Tableau Public’s position. Read it here. To say “it’s about time” would be a big understatement. I and others, have been pressing for this for a long time. Thank you to all of those that reached out directly to me asking if they could upload it onto their internal servers. I hope I’ve set an example for others for how to attribute work; I was very deliberate about how I went about it.

This week, we saw many, many people attributing their work to those that inspired them. There are too many to mention in this one post (read them all on data.world). I would like to highlight two people in particular because they not only have incredible design skills already and are seen as leaders in the data viz space, but they also are not ashamed to admit that their work was influenced by others.

Daniel, an Iron Viz finalist this year create this viz: 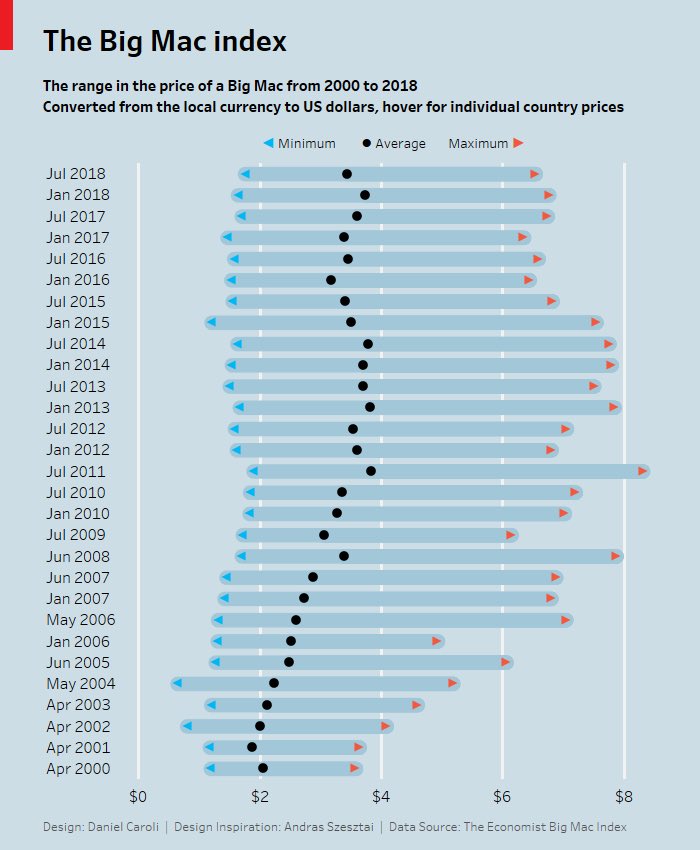 Daniel has directly and deliberately given attribution to Andras Szezstai and his fantastic NBA team spending viz. The attribution didn’t take Daniel more than a few seconds to add to his viz and his tweet, and it set an example for others to follow throughout the week.

Neil, a Tableau Zen Master, has over 200 vizzes on his Tableau Public profile, and is STILL influenced by others, just as we all are. We see other vizzes and they provide us with ideas for our own work. 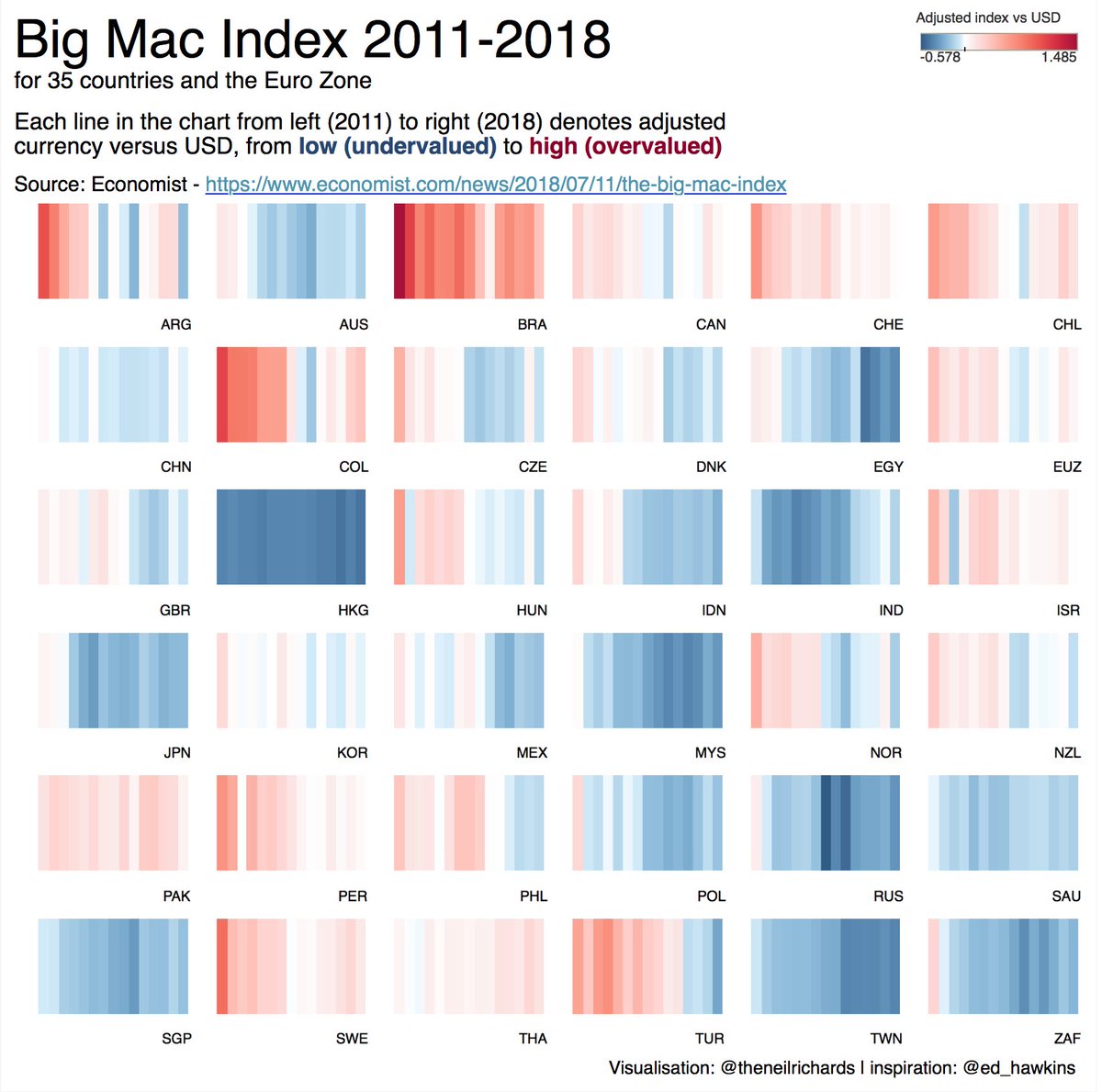 Neil has done much like Daniel, giving a simple attribution in the footer of hiz viz and tweeting the same. On top of that, Neil realized later that he was influenced by the 6×6 design of Luisa Bez’s viz without realizing he was, and made sure to give her due credit as well in a separate tweet.

Two of the best data vizzers out there, both giving credit to their influencers. I hope this is a trend we see continue.

LESSON 2: WHAT IS THE PURPOSE OF A MAKEOVER?

Each week, Eva and I post a data set along with a link to the original article and visualization to makeover. The visualization itself is embedded within our tweets and on each week’s data.world page. The reason we do this is so that people know WHAT they are trying to makeover and the CONTEXT behind the original chart. It is fundamental to creating effective makeovers to look at the original viz BEFORE you start your own and ask two simple questions:

You should do this because it helps focus your mind on the improvements you could make. In other words, you can keep some of the things that work and improve upon those that don’t. The second part of the process everyone should go through is to understand the context behind the visualization. Read the article we link to. This will help you understand WHY the viz was created in the first place. You will then know the question that was being asked and that can help guide your analysis.

One you’ve done those two simple steps, neither of which should take more than a few minutes, gain an understanding of the data by exploring it. What do the measures and dimension in the data set mean? What can you use and what should you discard? This simplifies the data and the analysis.

Now that you have a clear picture of what the data means, consider starting by asking a question in the title of your viz. This will help you focus your work and simplifies the overall process. If you add elements that don’t help answer the question, take them out. Once you’ve answered the question, put on some polish to make the viz look good, maybe change the title if you don’t want it to be in the form of a question.

You’re much closer to “done” at this point, but you’re not. Ask a friend or colleague or your significant other or someone on Twitter to review your work. Show them the original. Ask them if you’re making the data more clear through your work. Every week, Eva and I send drafts to each other for feedback. It doesn’t take long. Way too many people skip this step and produce work that is WORSE than the original. Don’t believe me? Look at the vizzes people posted this week. I bet you’ll pick out quite a few pretty quickly that are worse than the original. That isn’t a makeover. A makeover either (1) improves on the original or (2) reveals different analysis presented in a better way. If you’re not doing one of these, you’re not done with your makeover. If you treat Makeover Monday as a box-ticking exercise, you’re doing it for the wrong reasons. Remember, this becomes your portfolio. If your work doesn’t show improvement, you’re less likely to land that dream job.

If you’re unsure if your viz works well, then it probably doesn’t. If you want feedback, post it for review on our weekly Viz Review webinars. Watch the webinar and LISTEN to how we critique your work. The most important part of the feedback loop, though, is that YOU have to iterate on your work. If you don’t, you’re wasting time that we could spend helping others. If you’re not going to iterate, please don’t post your work for review. We don’t get paid to review your work; we do it because we enjoy it and because we want to help people get better. However, when you don’t iterate, it leaves us dejected and feeling like those sessions are not valuable. 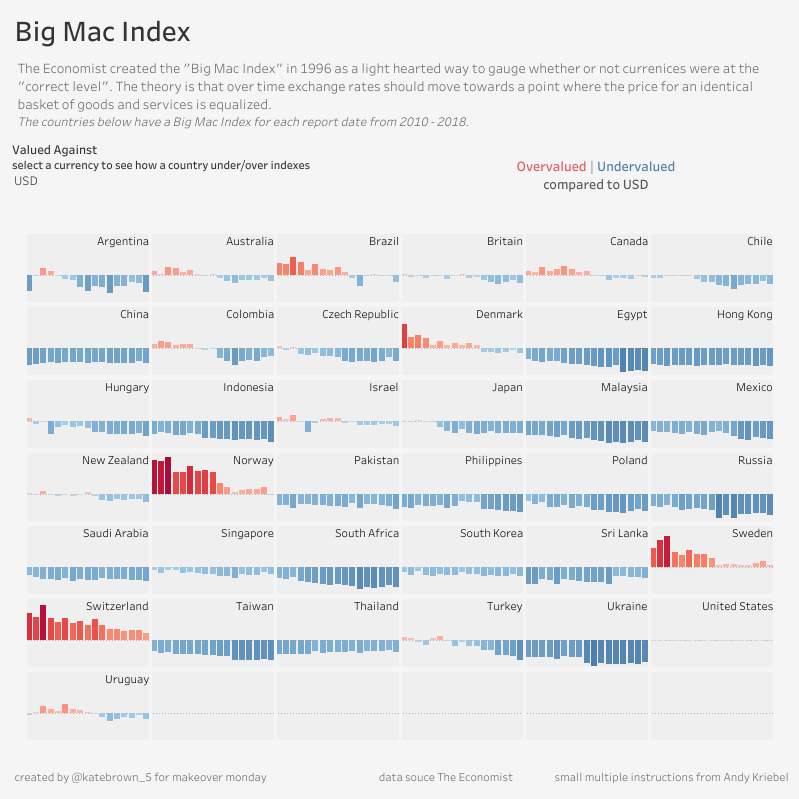 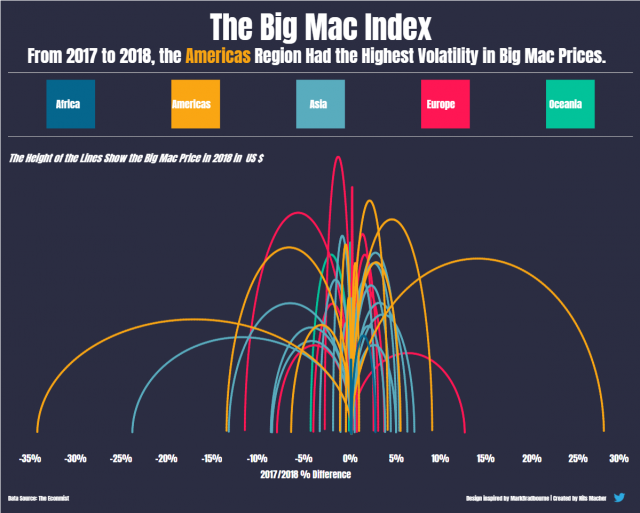 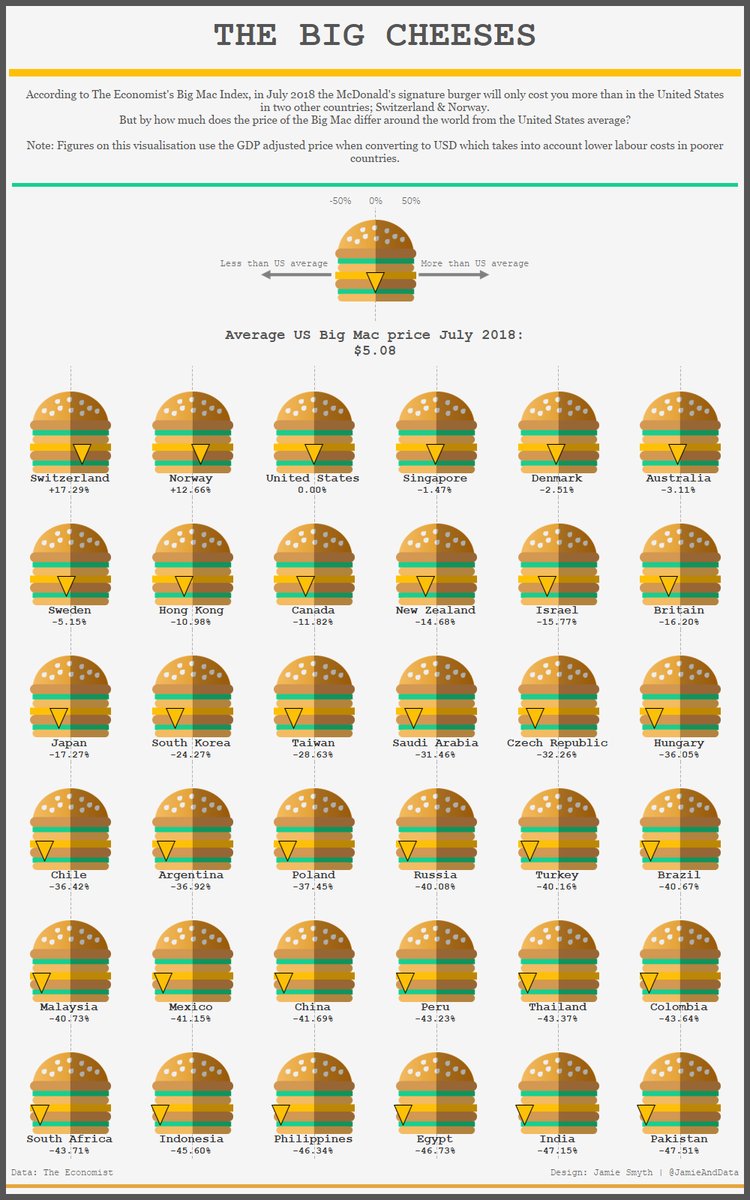 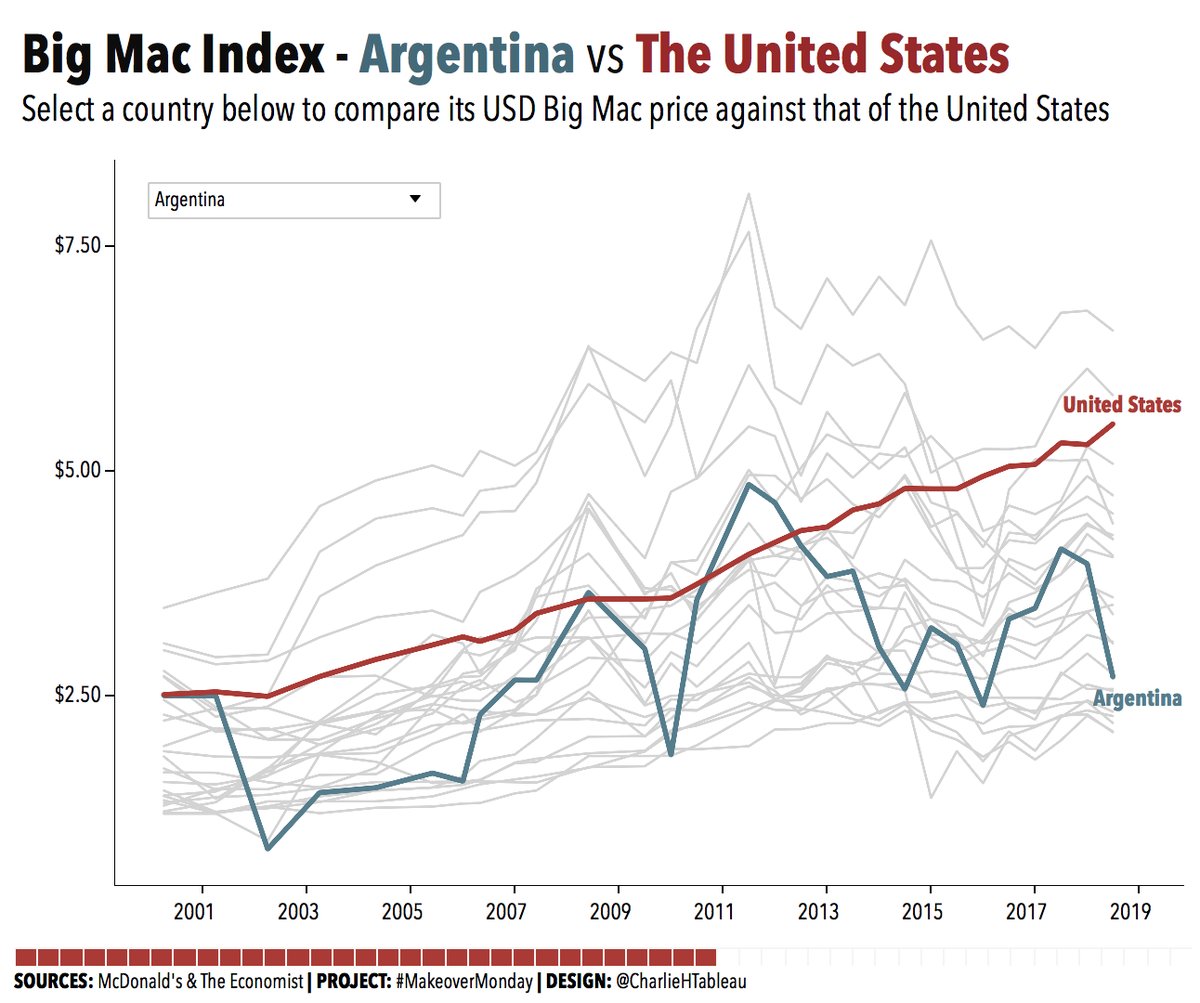