This week I provided a dataset containing Volcano Eruptions from 1436 volcanoes. The original viz fascinated me and the topic was one I hadn’t explored. So, similar to our Turkey Vulture migration patterns at the beginning of this year, I was intrigued to see what you all would create with the data.

And yes, it wasn’t an easy dataset. While the dimensions and measures were pretty straightforward by themselves, the wording of our insights was where quite a few people, myself included, tripped up.

This week we had data that contained the most recent eruptions of 1436 volcanoes, including some other information like location, volcano elevation, type of volcano, dominant rock type, etc.

The data was not about the frequency or number of eruptions and this tripped up a few people. It’s important to always be as precise as possible in your descriptions, titles and annotations when you aim to inform your audience. These rules don’t necessarily apply to humorous vizzes etc., but if you are building an infographic or educational dashboard about volcano eruptions, be sure to precisely state your findings. Double check whether your wording is accurate and whether your claims are substantiated by the data.

Ideally, your statements can be easily validated by your audience by looking at the supporting visualizations.

Check out this viz by Peter Empey. Peter looks at how many volcanoes have last erupted in certain time periods. His description above the viz helps explain what the dataset contains and explains the ‘last eruption’ concept. A nice simple viz that communicates clearly and doesn’t mislabel the results. 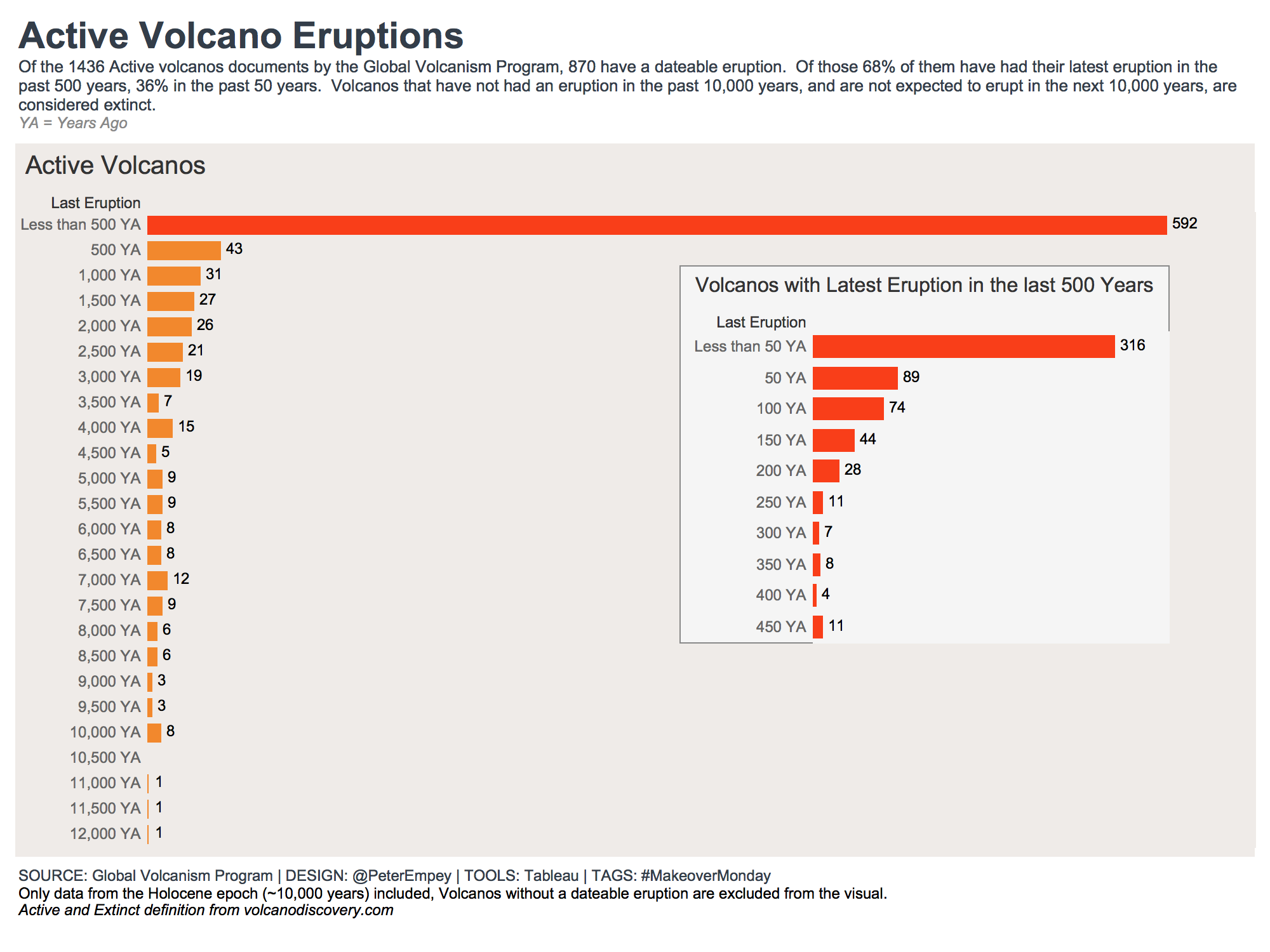 If you are unsure how to interpret the metrics in a dataset, just ask. We’re supported by many great members from our community and if you send your question to the Twitterverse or post it on data.world in the questions section, you will most certainly get an answer. If Andy and I don’t get the chance to respond in time, don’t hesitate to ask someone else. We’re not the only source of knowledge :-). And by asking others and engaging with them you also get to build your connections to fellow members of the community.

Who doesn’t love a nice map? I have them hanging on various walls in my apartment and we often get the chance to use maps in our data visualizations as a way to engage the audience. Most people are perfectly happy zooming in on a map, scrolling around and interacting with the data that way. Thanks, Google Maps for building better map data literacy, or at least familiarity :-).

This week we expected a lot of maps. Heck, I even encouraged people to build maps with this dataset and the location of volcanoes around the Pacific Ocean, which form the ‘Ring of Fire’ just scream out for a map.

There were a few things we noticed this week that didn’t quite go to plan when it came to the maps, though. So let me share some examples we looked at during Viz Review and my recommendations on how to improve those vizzes.

When you repeat the background of a map, it means there are no white or black spaces around the outside of the map when the user zooms out. The map just continues left and right. Nice idea in principle but not so great when it results in data points being repeated because it gives the impression that there are more data points than actually exist.

Tim submitted this viz for review 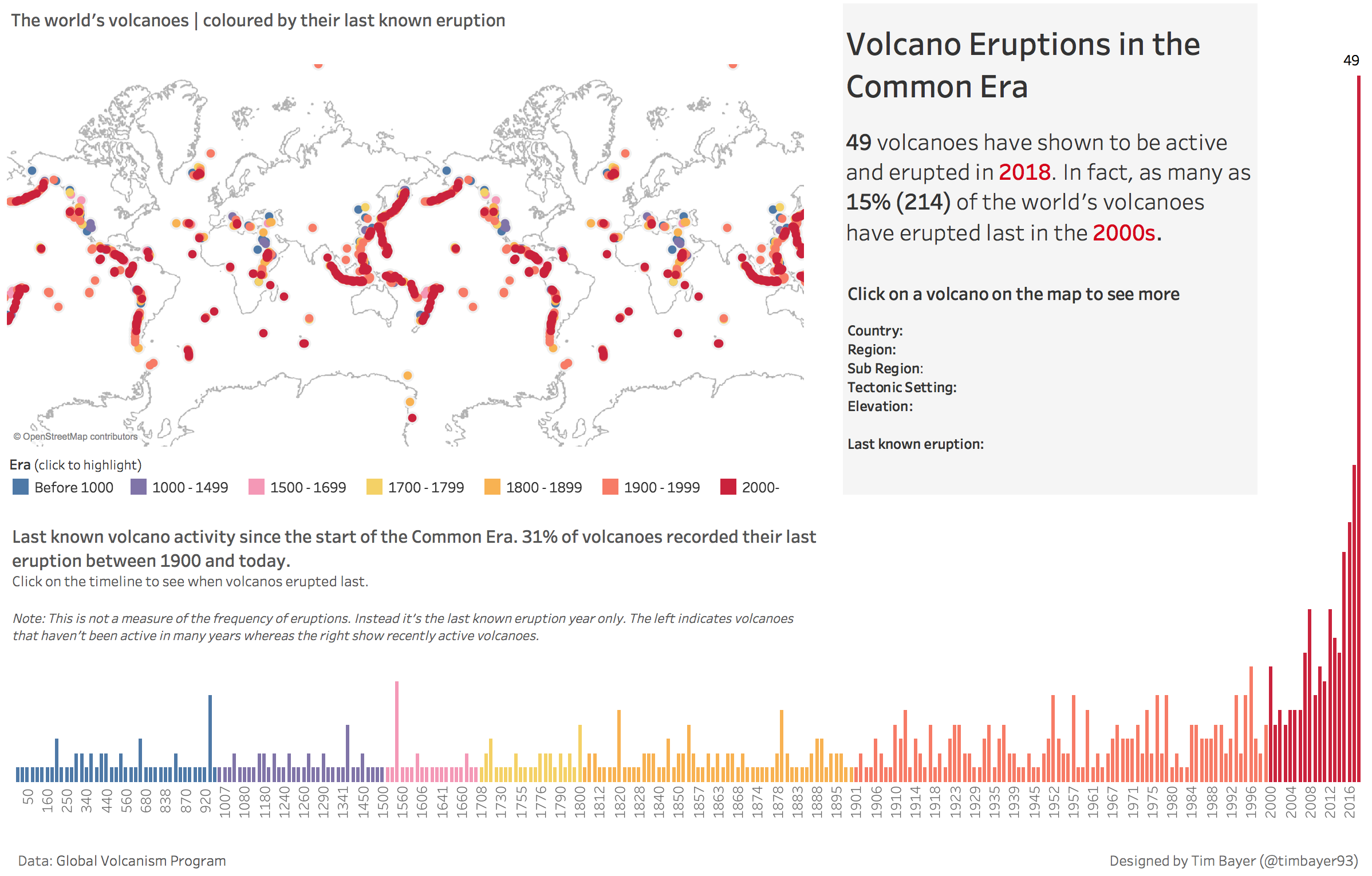 The map is repeated (notice the Americas on the left and then again in the middle of the image). This results in twice as many circles for volcanoes than there should be, giving users the wrong impression. Just show the world once, that’s enough ;-).

Our feedback was to remove the option ‘repeat background’ in the map layers in Tableau. Then size the map worksheet accordingly and fix the zoom level (unless you want people to zoom in).

Some people aggregated the data to the country level, for example, showing circles sized by number of volcanoes for each country. This is not wrong. I would suggest that for this dataset, however, the characteristics of the data warrant a more detailed map, which shows the pattern of the volcano locations. Unless you go for a bit of abstract data art (see favourites section), then aggregations can work. For a geographical map, however, it’s good to show the detail in this case.

Symbols on a map

This week we saw lots of maps with circles but also a number of maps with triangles to depict different volcanoes. Both can work well but keep in mind that the density of volcanoes in certain locations mean that symbols will overlap.

For overlapping symbols it’s helpful to make the circles/triangles/etc. a little bit transparent so your users can see that data points are ‘on top of each other’. Try also to change the border color to see what looks best for the design you’ve chosen. Sometimes medium to dark grey borders can be helpful for distinguishing the data points from one another.

Lastly, move the smaller symbols (if using size to differentiate) to the front so they’re not covered by the larger symbols. To do this in Tableau you can reverse the order on your size marks card.

Arjen created this viz including a map with symbols. Notice how the smaller circles are in front, which is great. What’s still missing is some transparency. Adding transparency (or reducing opacity) will help separate the circles from one another so they become individual dots rather than ‘worms’ :-). 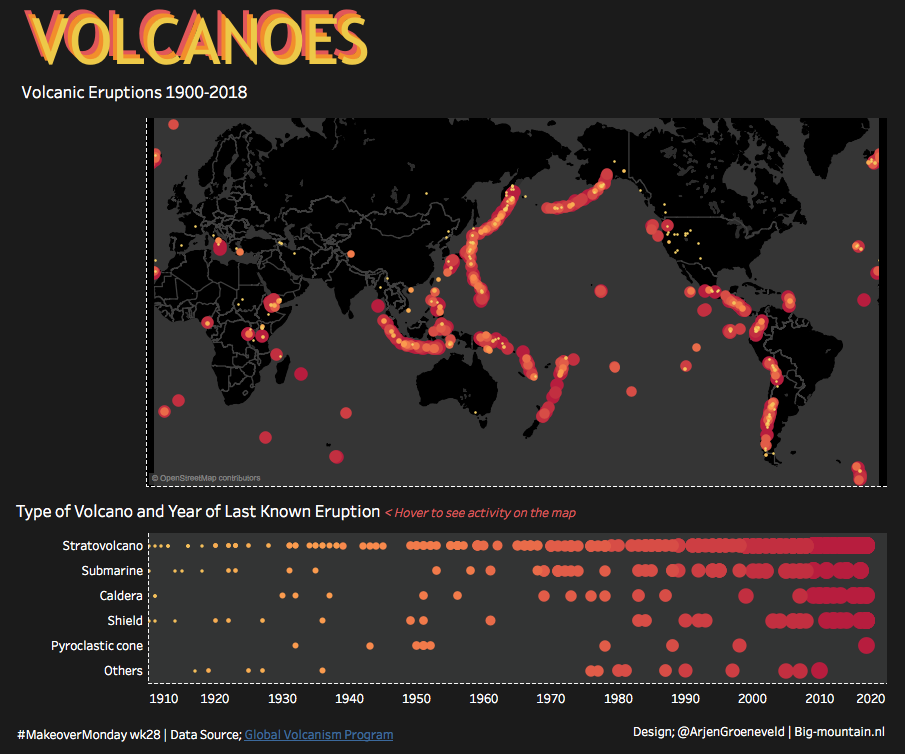 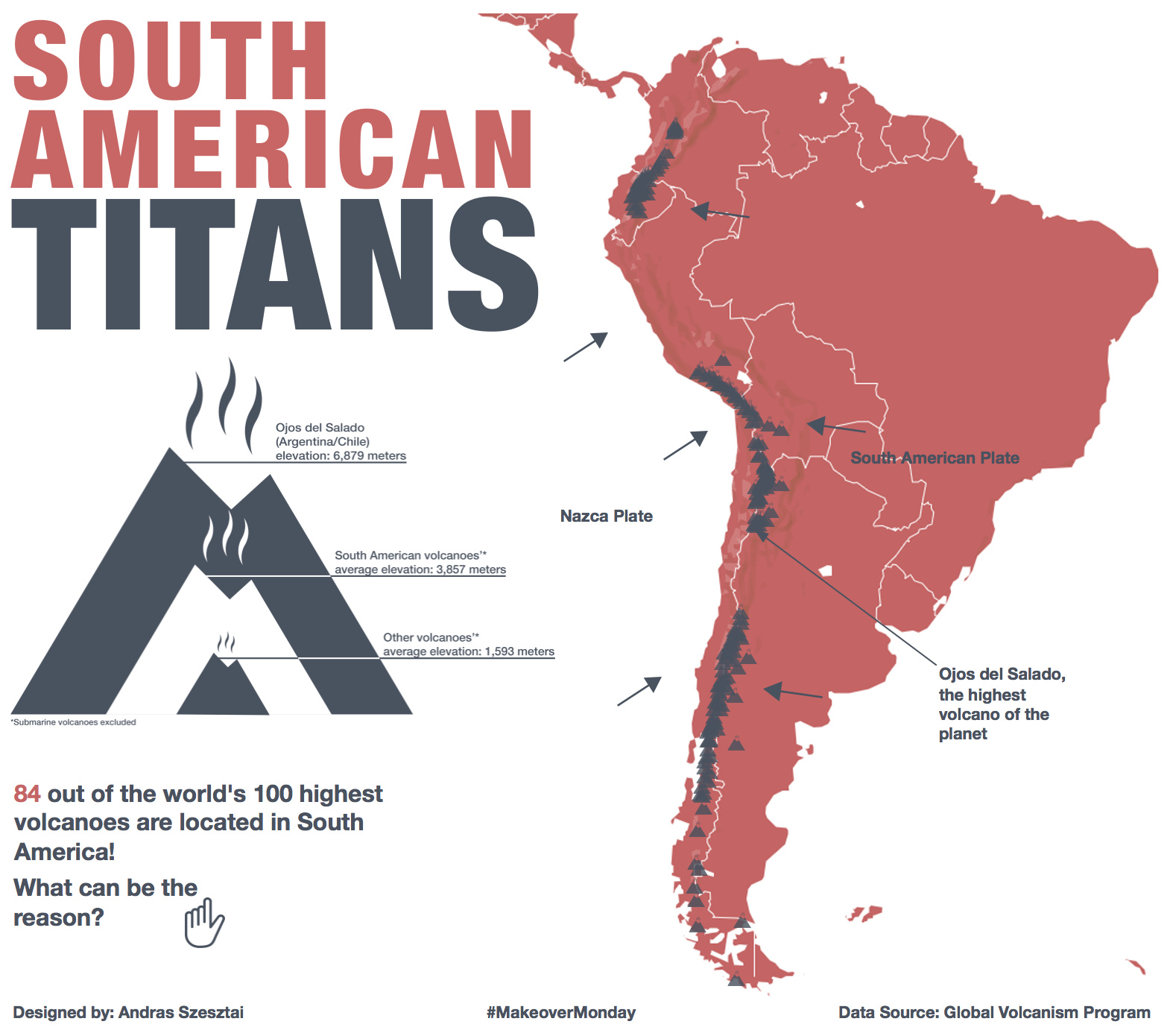 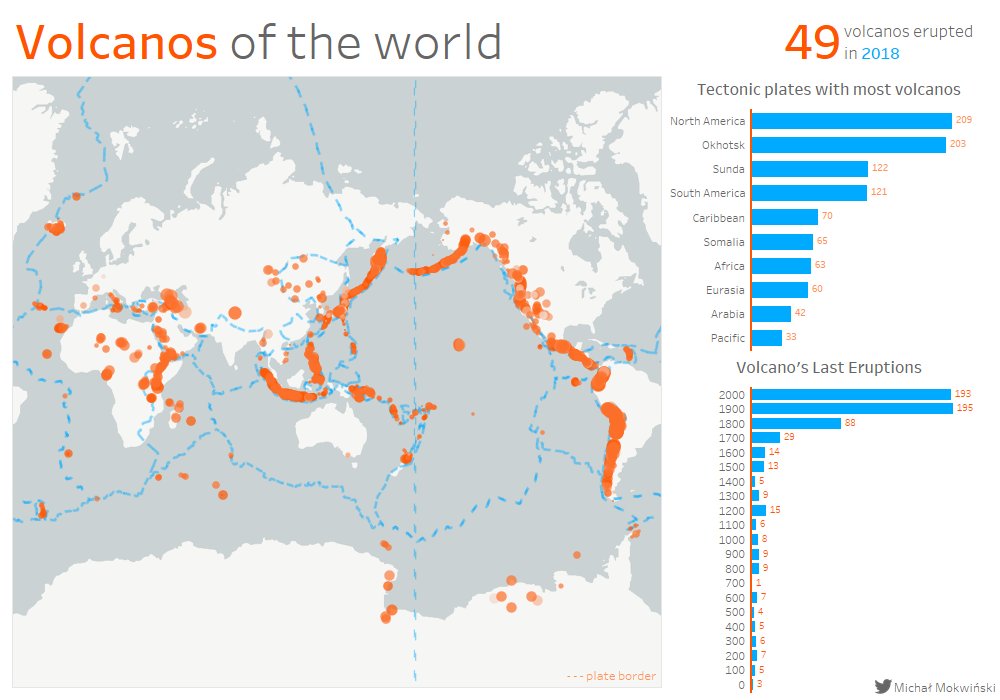 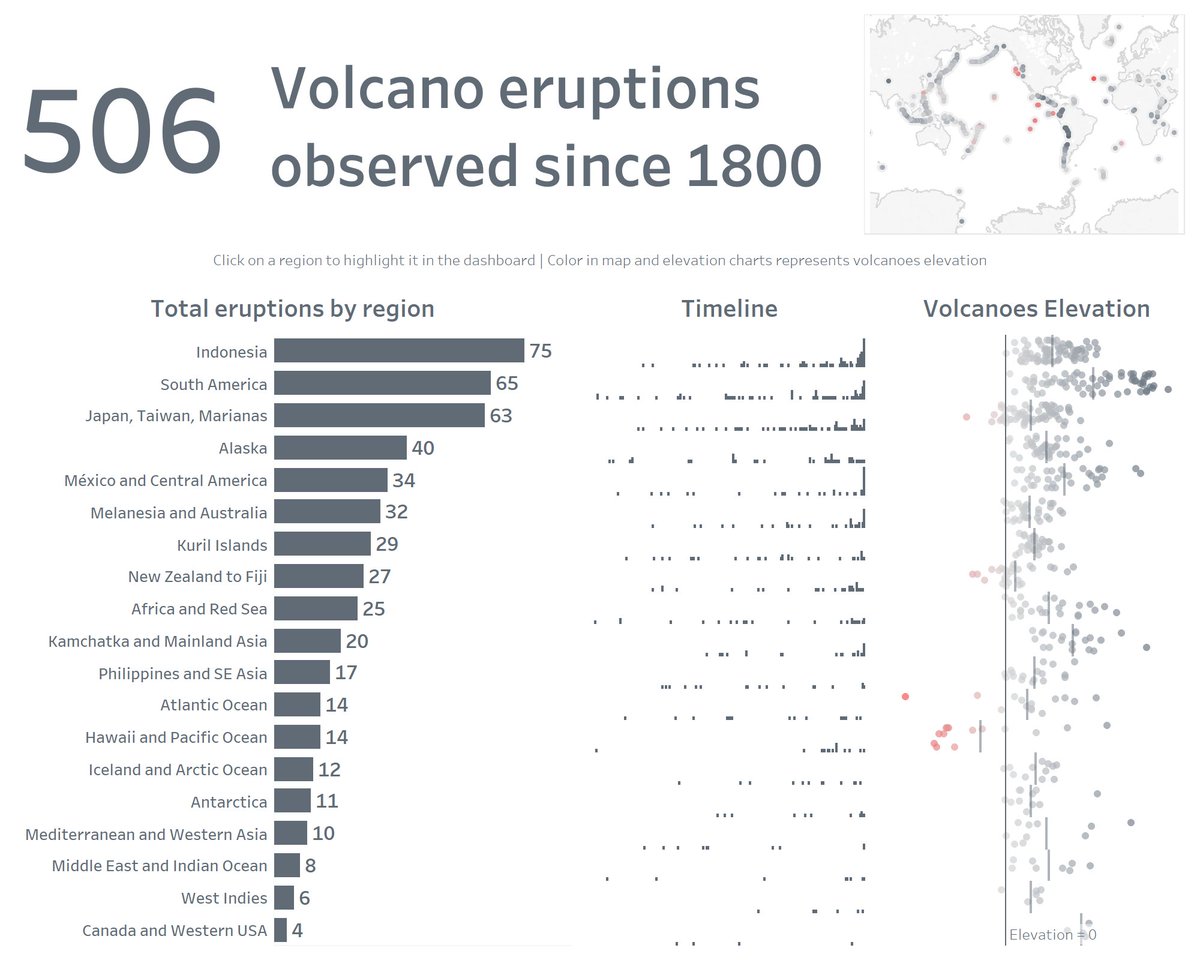 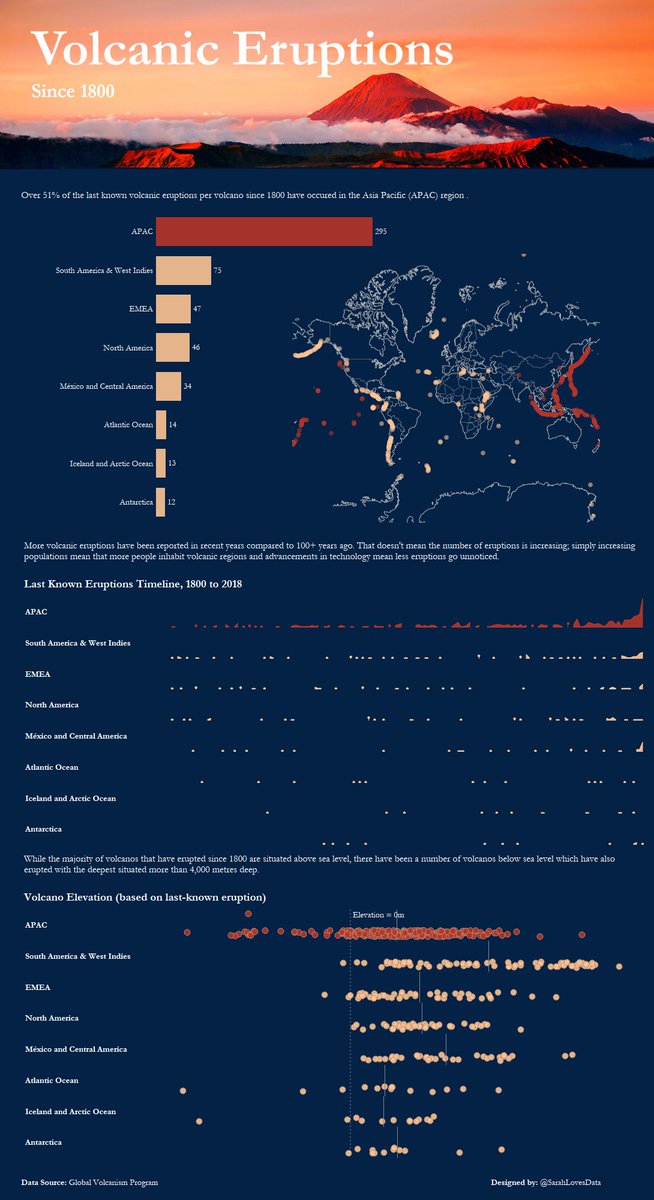 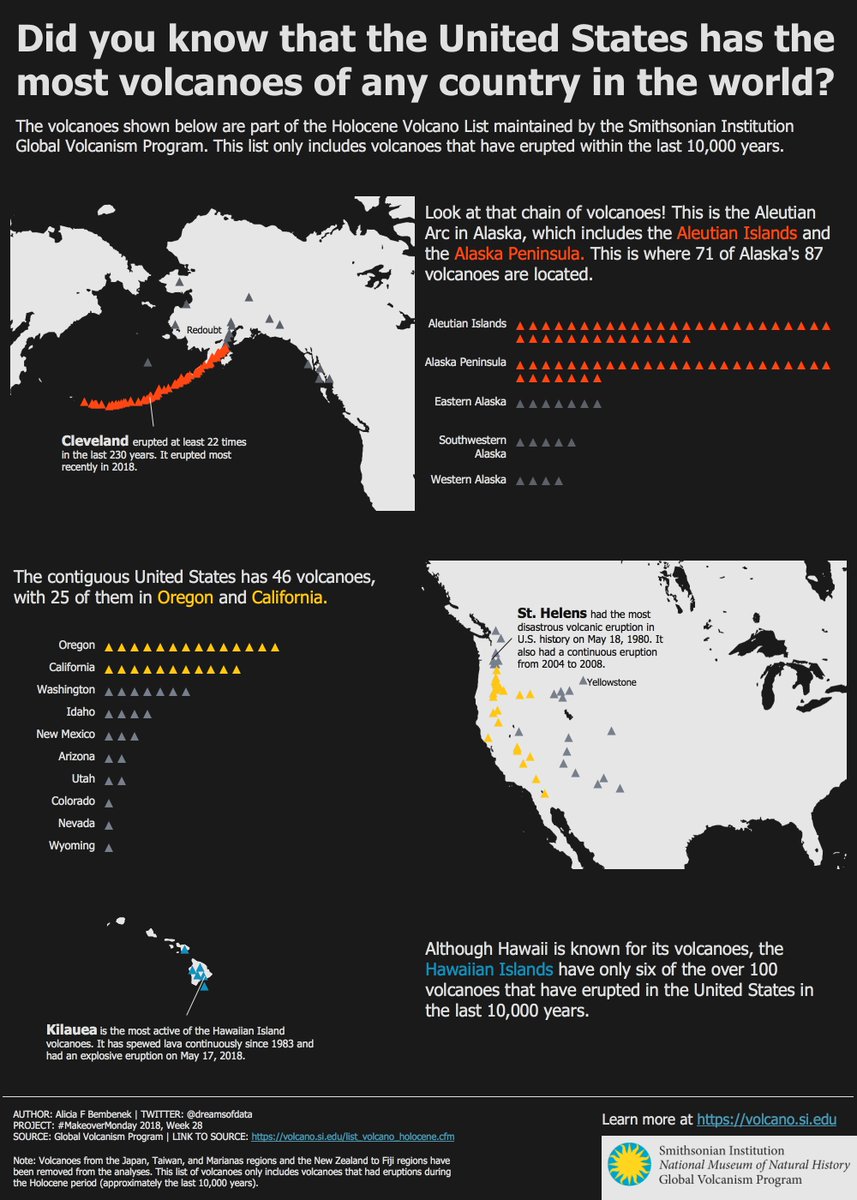