Week 21 – Are Britons falling out of love with booze?

For week 21, I intentionally chose a topic about the Brits because of our Makeover Monday Live in Paris. Why? Because the French love making fun on the Brits and the topic got them immediately engaged. I also found this topic quite interesting because as an American living in London, the pub culture can be quite overwhelming.

The data set itself was pretty simple. People surveyed fell into one of three categories of drinkers, the survey was conducted over several years, and it was split out by gender and age. There were a few traps I thought people might fall into, which I’ll get to in a bit.

The more that Eva and I run Makeover Monday Live events, the more we realize how incredibly good the format is for introducing people to Tableau, the Community and the project. Eva has written a recap of the day here, and here are my highlights:

I only noticed two traps that people fell into this week.

This data set contained percentages of survey responses. Since the source did not include the number of responses as well, it means you cannot aggregate the data. I saw a few times when people took the average of all of the responses by gender. And others where people summed up the response rates. This isn’t mathematically accurate. Be careful when working with percentages. Unless you have the numbers that form the percentages and can create the weighted calculation, you should avoid aggregating the data.

On the positive side, everyone that I gave this feedback to realized their mistake and corrected it.

Many people this week looked at the year over year change in drinking habits. Great! Well, mostly. Like I mentioned, the data was percentages, so when you are calculating year over year, you should use the difference, not the percent difference. Let’s look at an example.

I’ve filtered this to one age band and one question. I then applied a difference to first table calc by year. This tells us that 14% fewer people aged 16 to 24 drank alcohol in the last week compared to 2005. Compare that to this view, where I’ve applied a % difference to first table calc by year. This implies that 23.4% fewer people aged 16 to 24 drank alcohol in the last week compared to 2005. 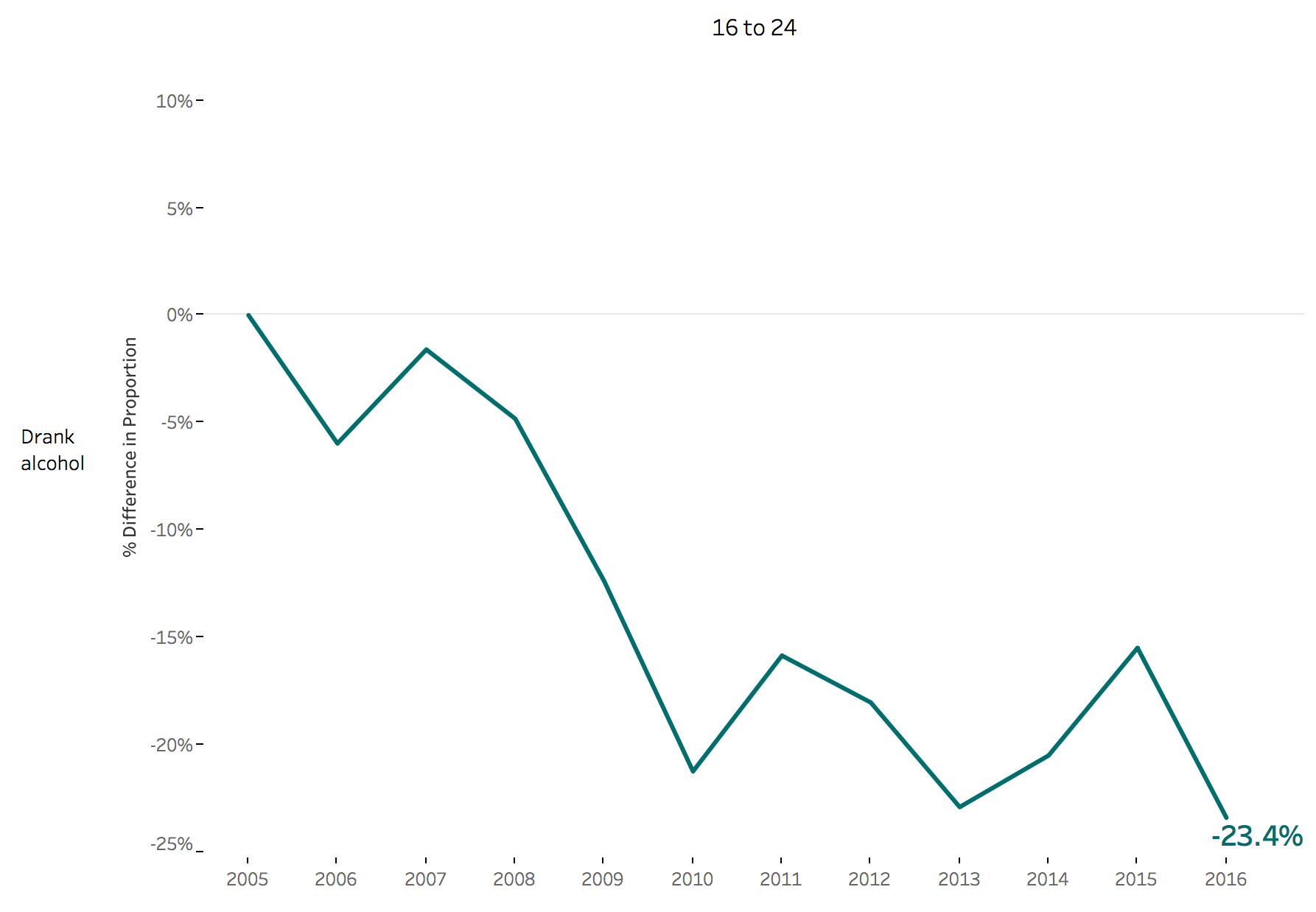 But this isn’t accurate. This is take the percent change between two percentages. Basically, be careful when working with difference calculations if your measure is a percentage.

I have a ton of favorites to highlight this week. There were a lot of really, really good examples and I think they all deserve recognition. With that, here are my favorites from week 21. 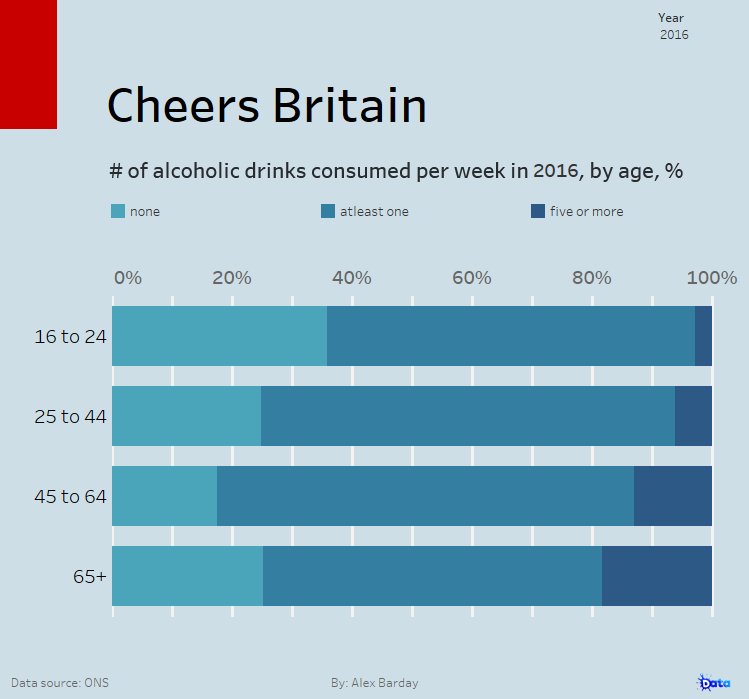 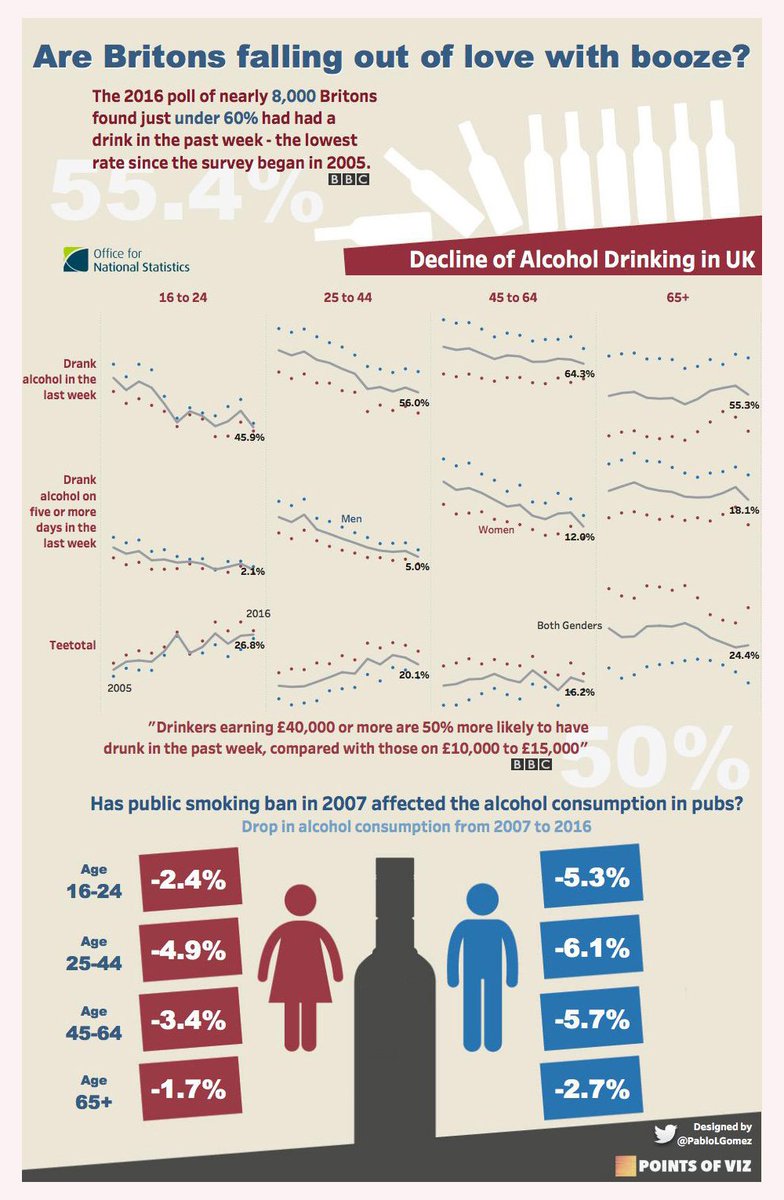 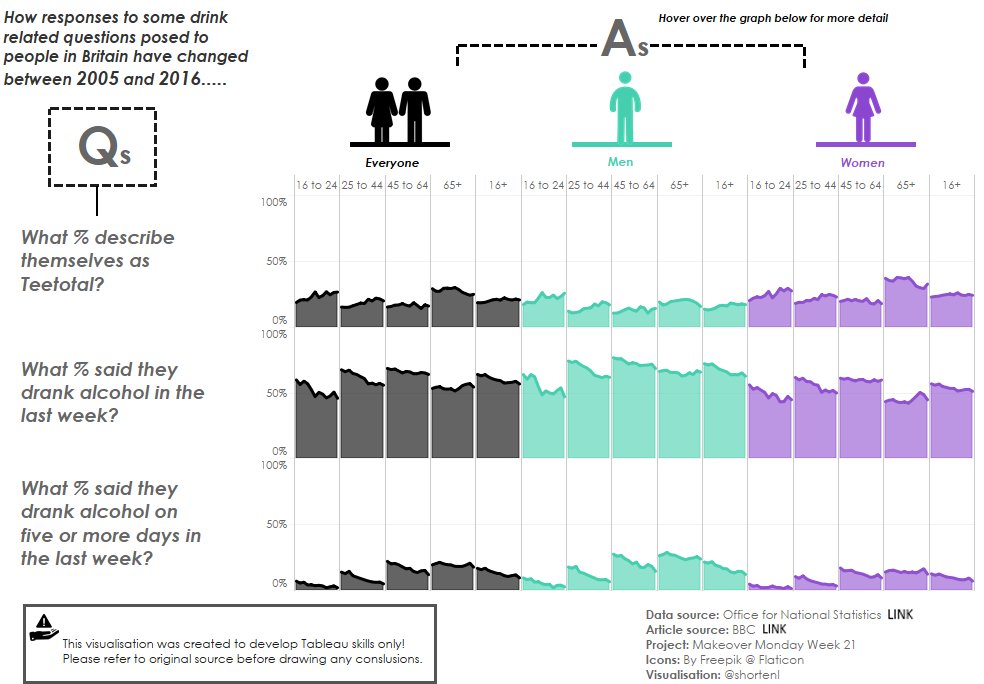 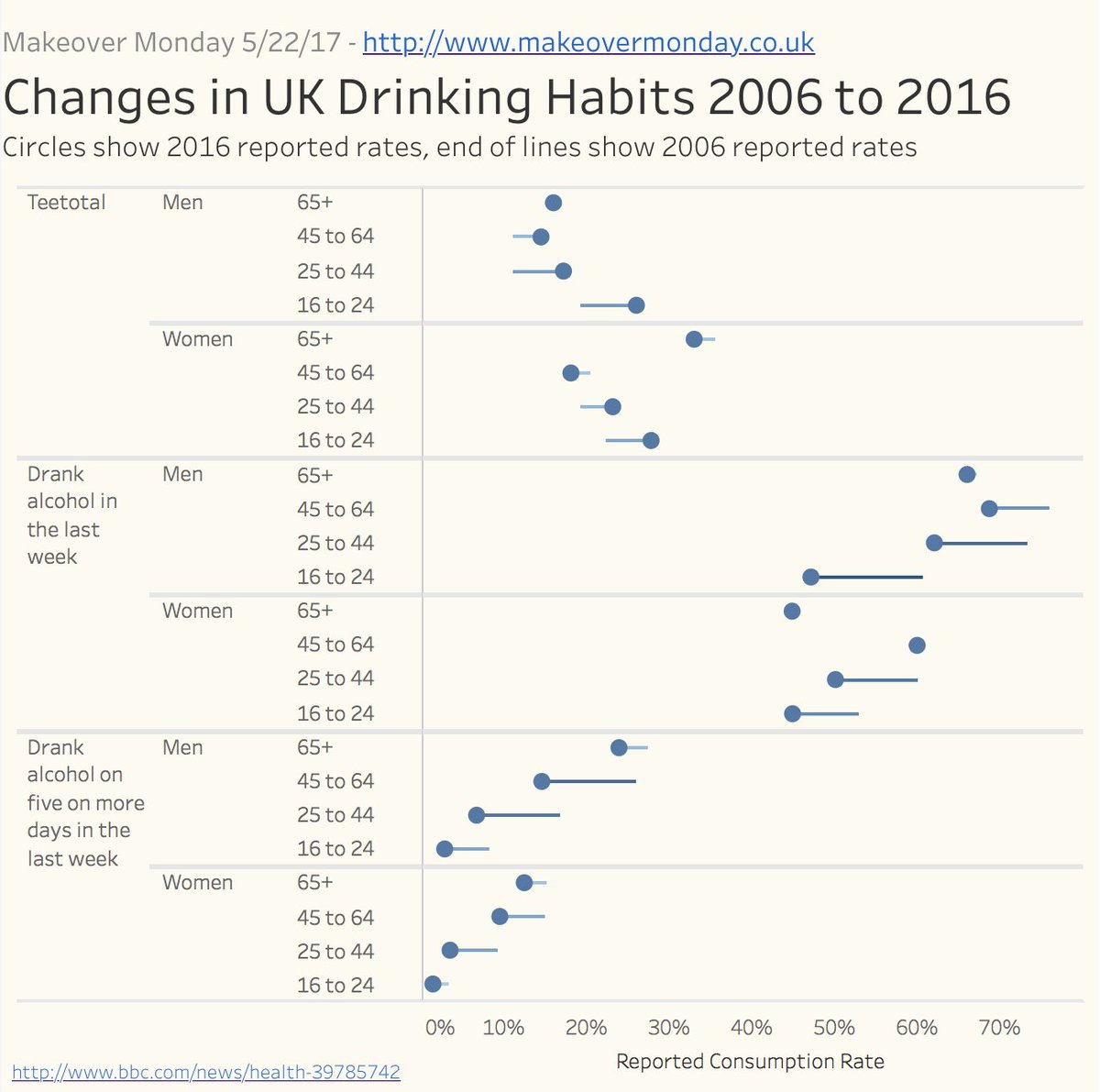 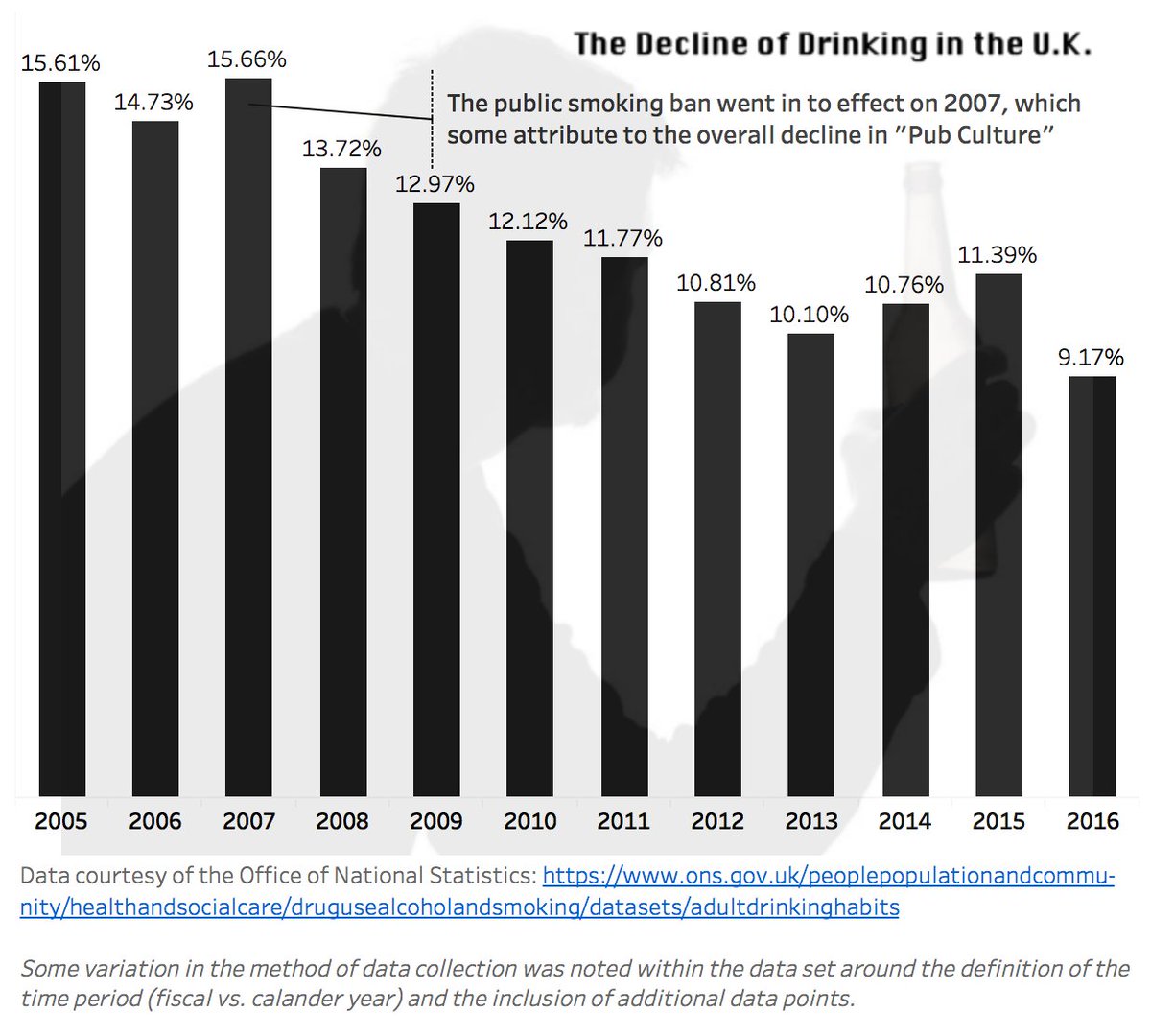 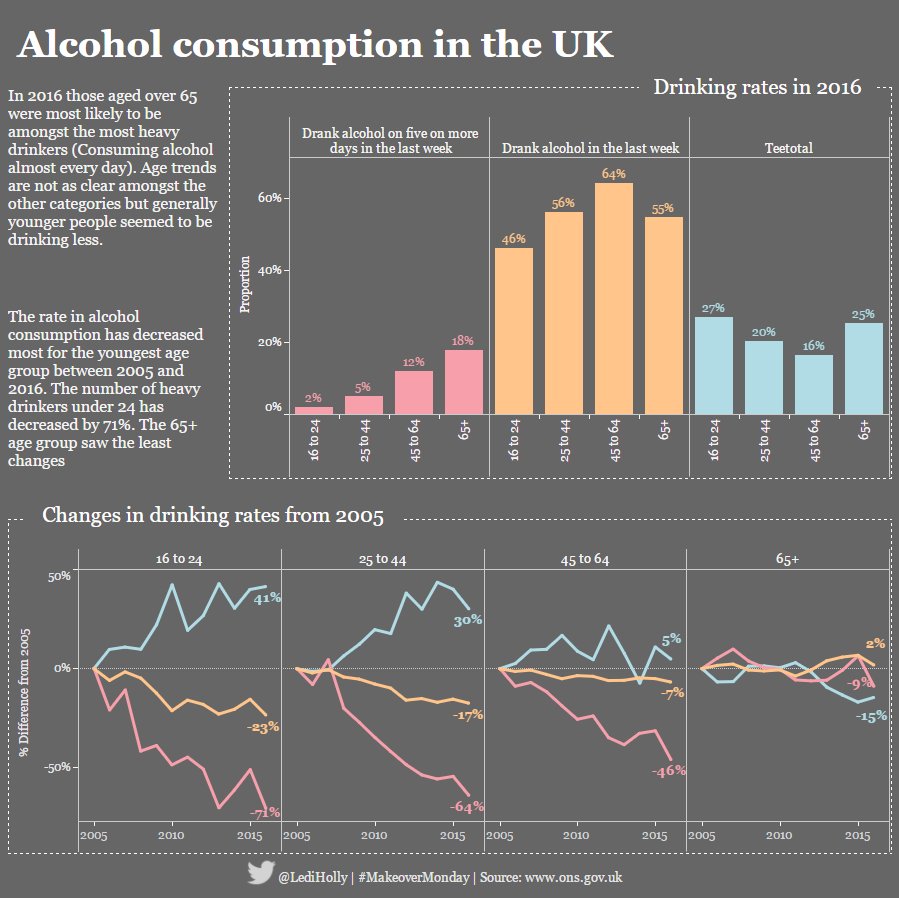 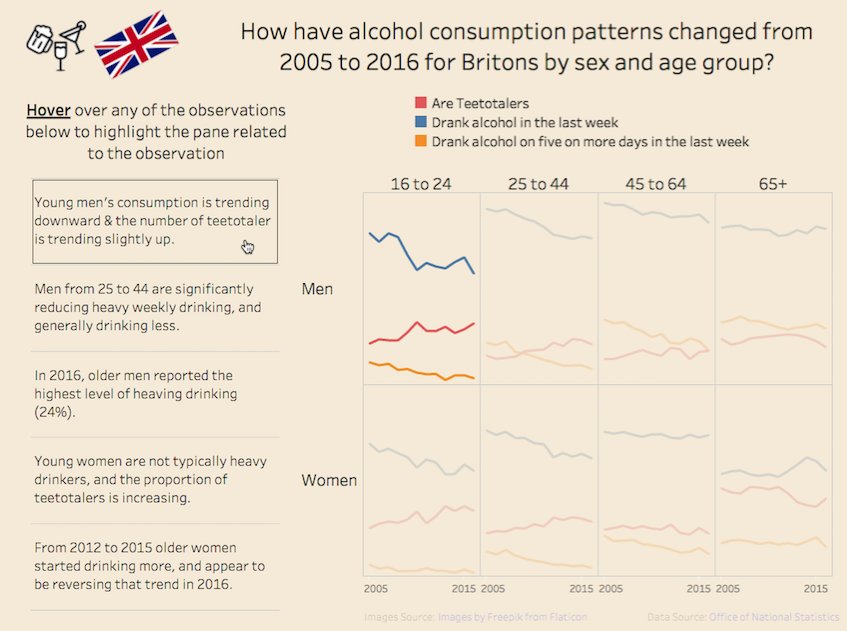 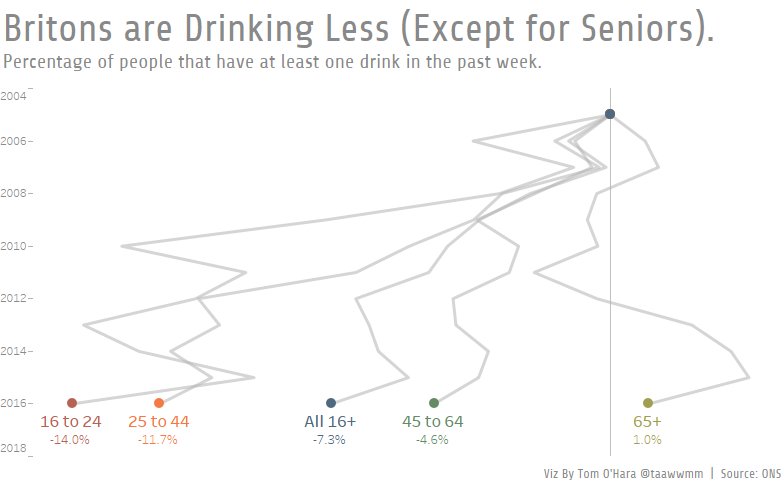