With the Premier League season just having finished, my beloved Arsenal having a terrible season, and the retirement of their greatest manager, Arsene Wenger, it only seemed appropriate to give the Makeover Monday community a data set from the Guardian showing their pre-season predictions compared to where teams actually finished. SPOILER: They only got two predictions out of 20 correct (Manchester City in 1st place and Arsenal in 6th place).

I swear these simple data sets bring out the creative beast in everyone. So many inventive, interesting vizzes this week. From simple to complex, this week has it all.

We expected to see a lot of slopegraphs this week, which makes sense because the data set was ideal for a slopegraph. In our upcoming book about Makeover Monday (click here to pre-order), I go into slopegraphs extensively. Let’s start with a simple understanding if what they are.

Slopegraphs are useful if you want the reader to only compare the start and end of a specific period. This week, the start is the predicted finish and the end is the actual finish. The ends of the lines are typically labeled and the lines colored by either absolute change, relative change or positive vs. negative change (i.e., two colors).

That last part is important. Let’s look at example of both uses of color, starting with this viz by David ó Cinnéide. 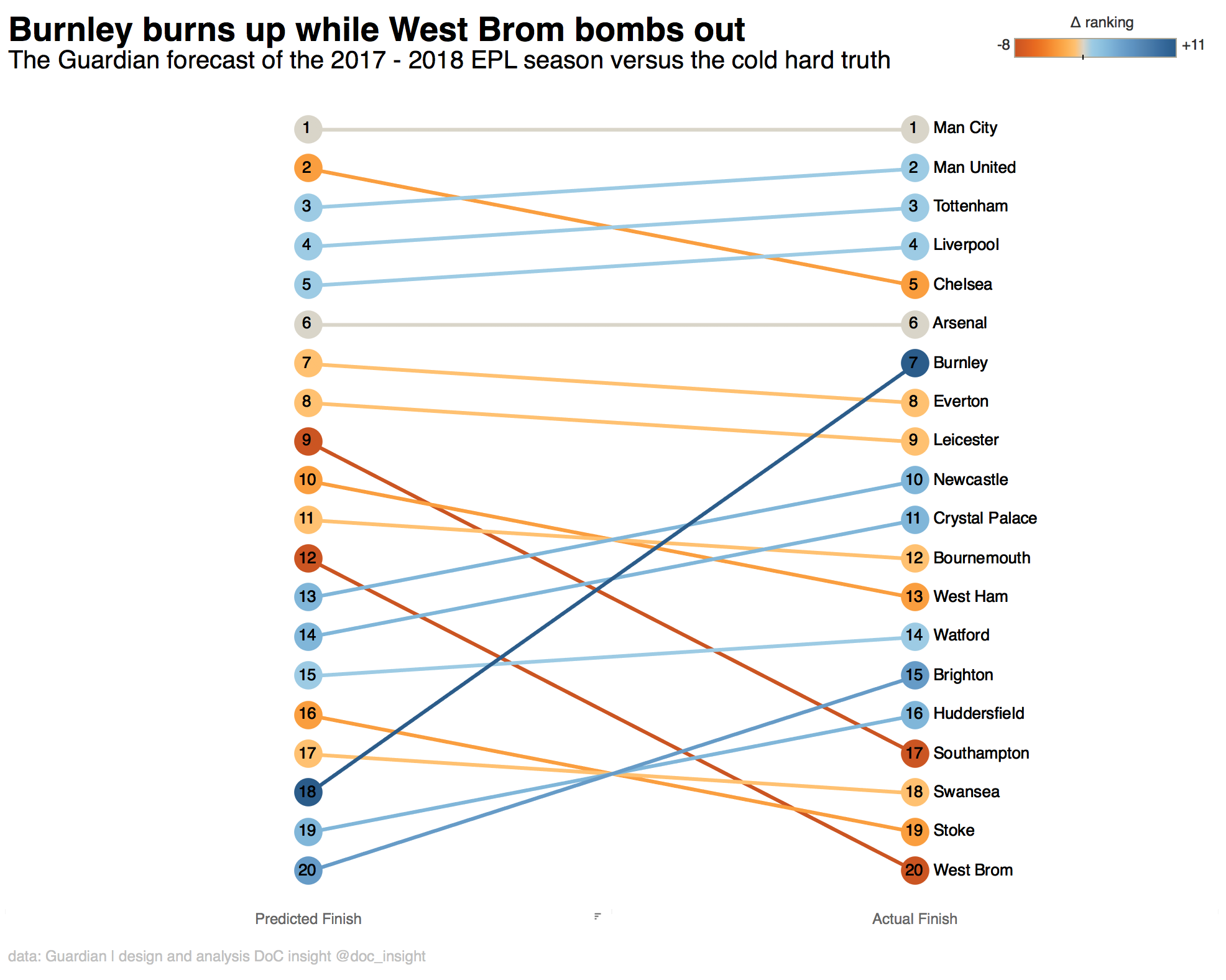 Considering the purpose, how did David do?

For the colors, David mixed both the absolute change and the positive vs. negative change, resulting in a lot of color variation that, for me, makes it more difficult than necessary to see what’s important. In a busy slopegraph, it would be more beneficial to the audience to make the insights obvious. David’s title captures the essence of his analysis, but you have to search for those two teams.

This slopegraph by Michael DiPalma provides the focus on Burnley and West Brom that David intended. 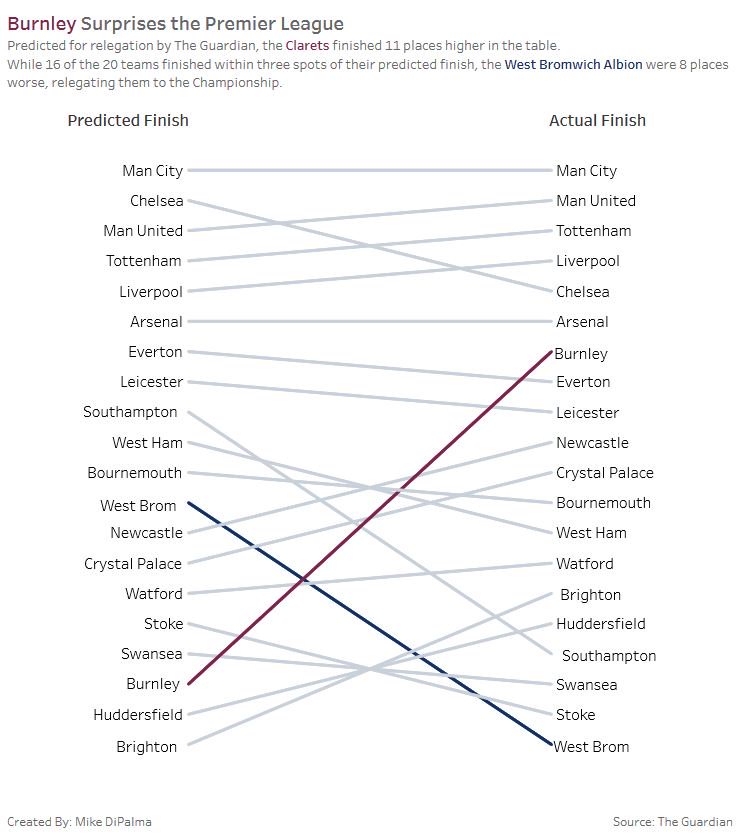 LESSON 2: GO EASY ON THE LOGOS

Given this data set was about sports team, it’s tempting to use their crests or jerseys in the visualization, but these can result in a cluttered view. When many of the jerseys or crests are similar, only those intimately familiar with the Premier League will be able to distinguish them. Consider this viz from Sarah Burnett that Eva and I reviewed during Viz Review.

If we remove the logos, we get a much cleaner view, but we lose the context of the teams. 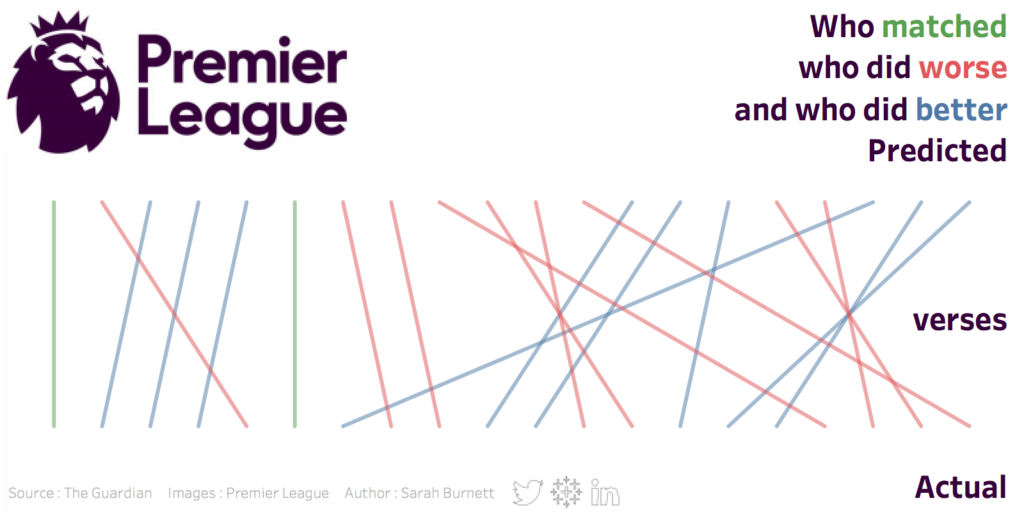 To fix that, let’s add the team names and reduce the text size on the right. 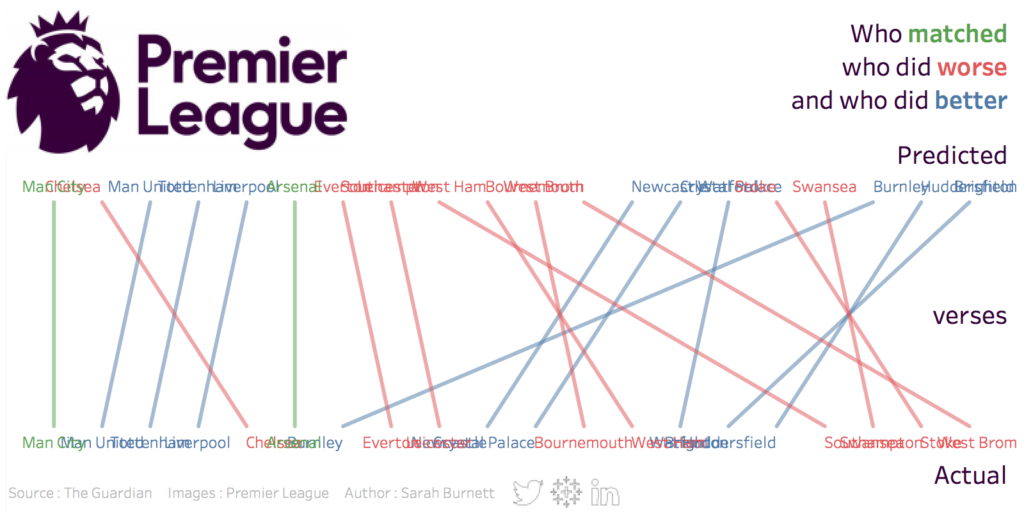 Now the names are a mess because they’re all overlapping. This is partly due to fact that Tableau doesn’t wrap overlapping text and also due to the vertical lines. Let’s rotate the chart so that the lines go left-to-right, as we’re used to with slopegraphs. 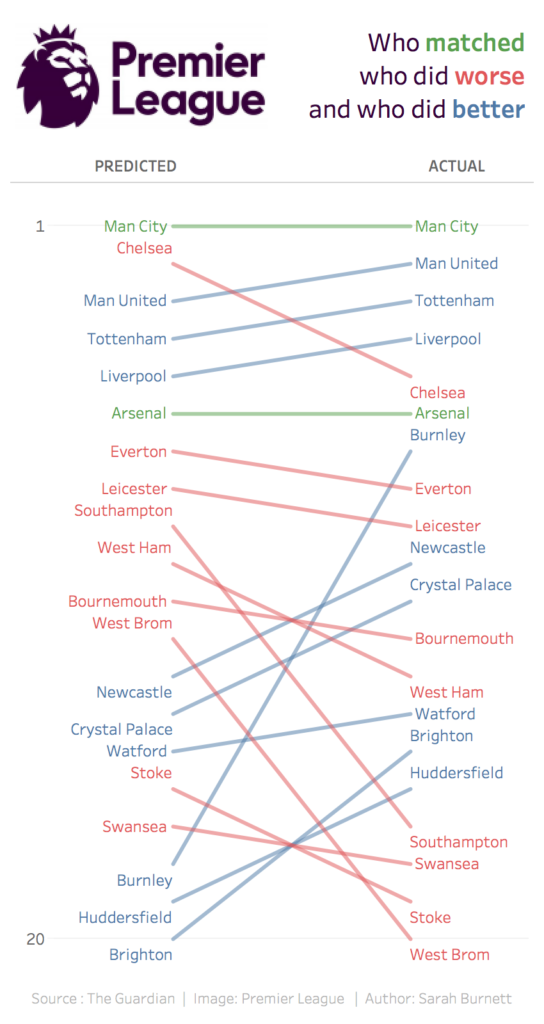 It’d be hard to argue that this isn’t much clearer than the original. Remember your audience; they are the most important people to keep in mind when creating a data visualization. If you’re unsure, ask someone who knows nothing about the data to review your work. If they understand it, then you’re probably fine. 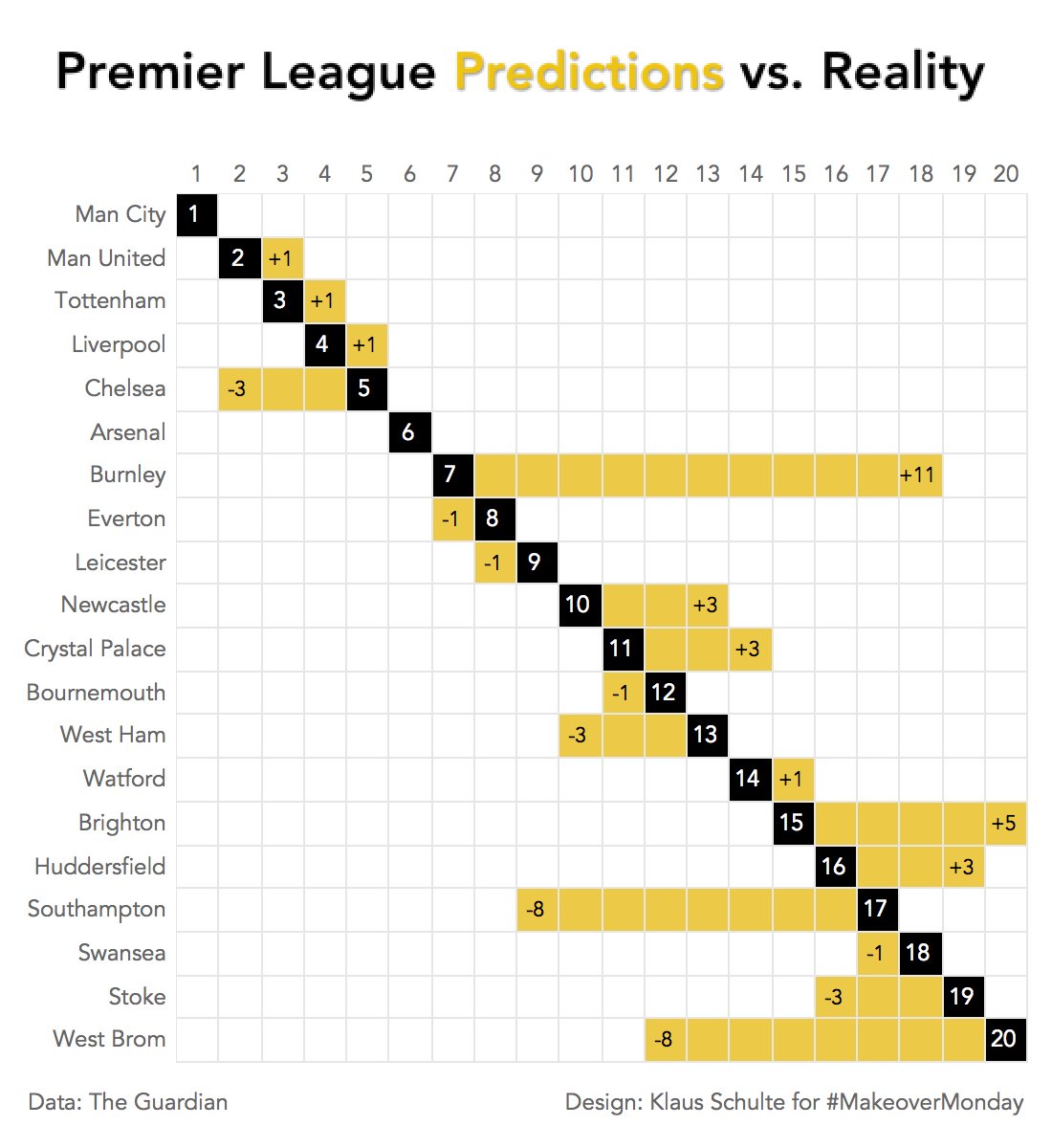 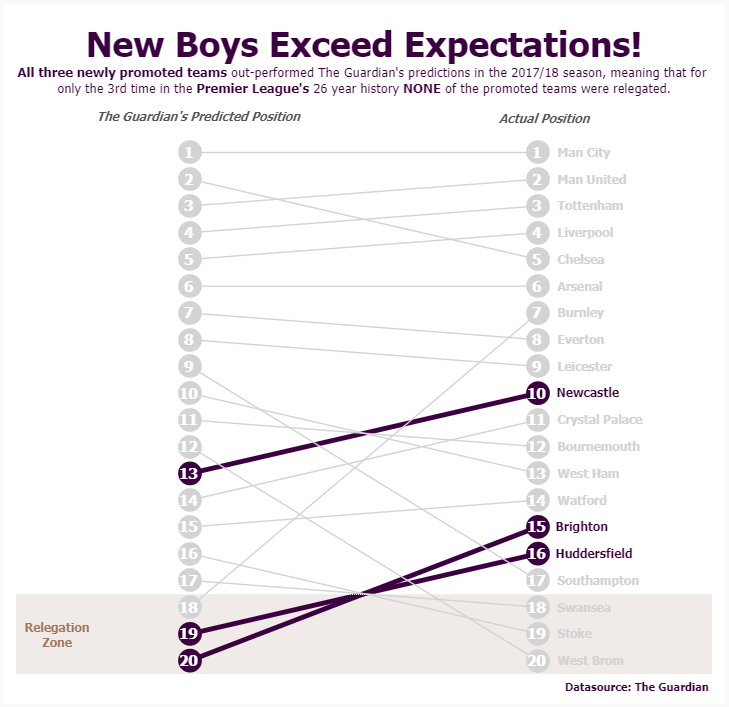 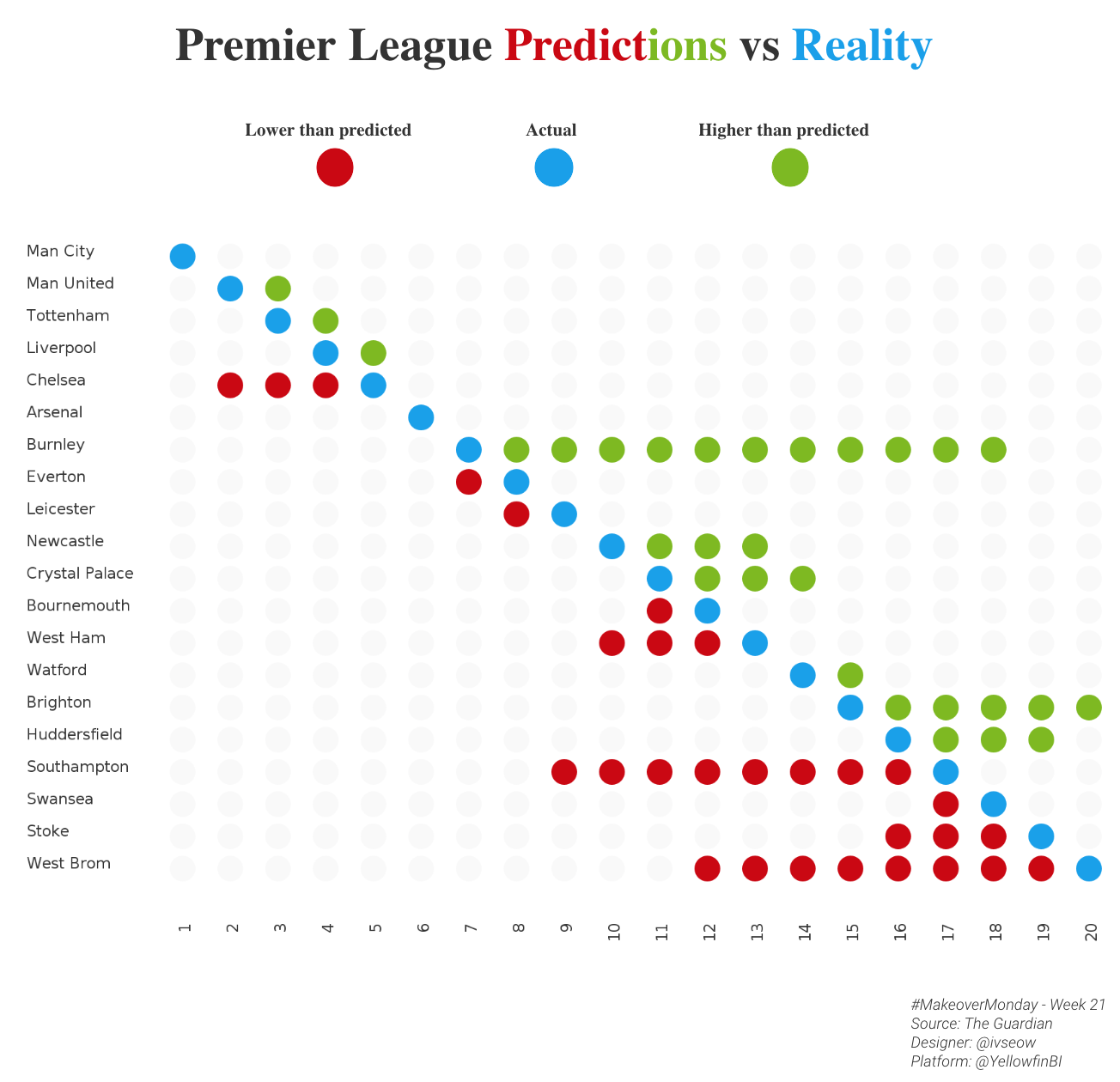 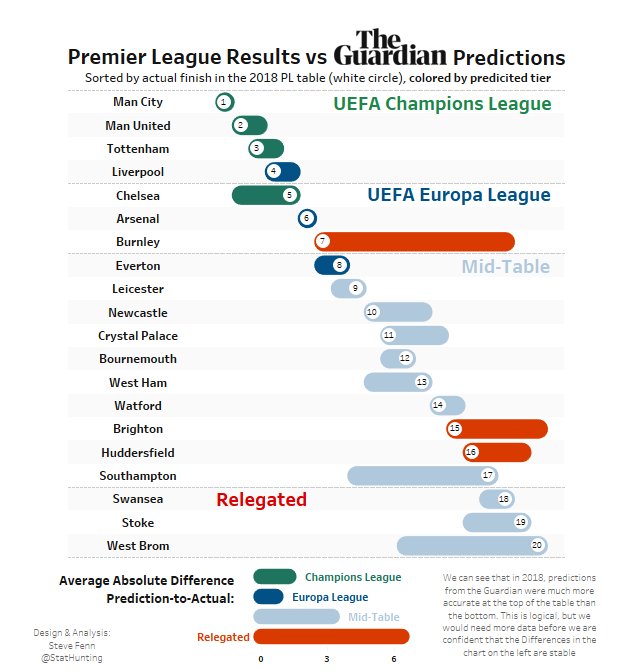 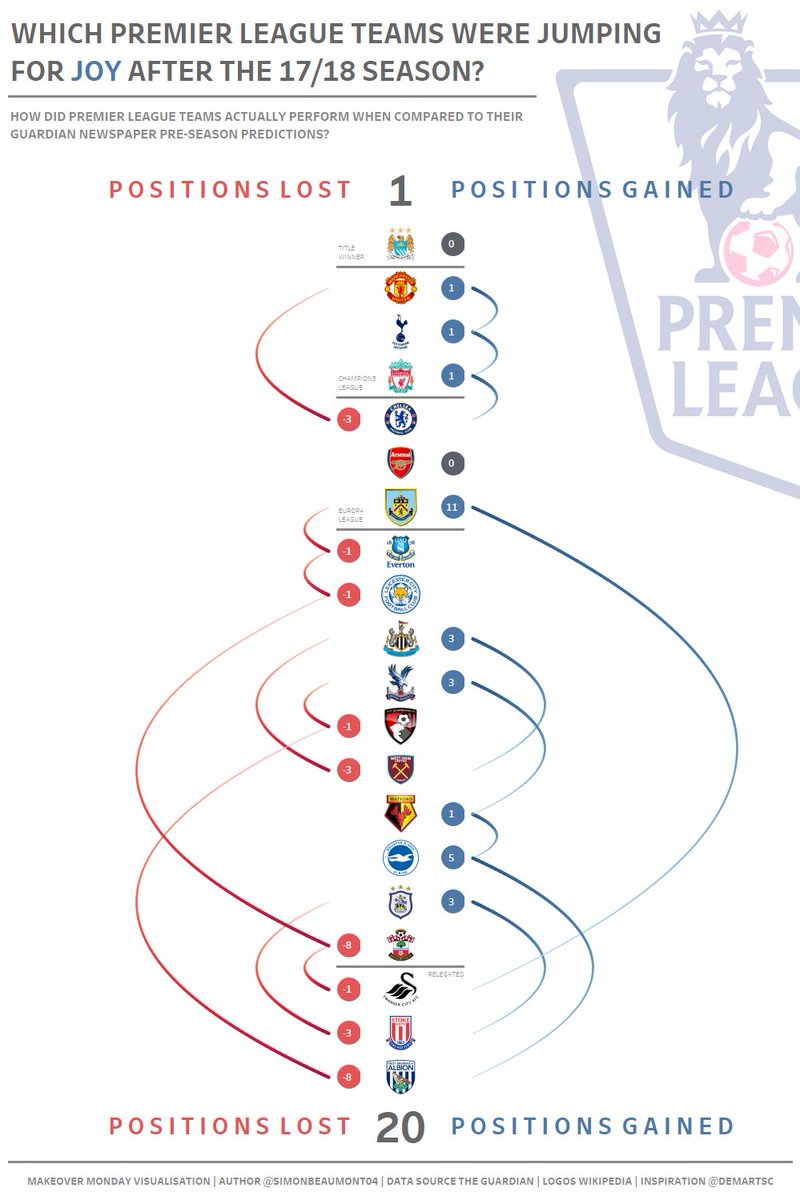 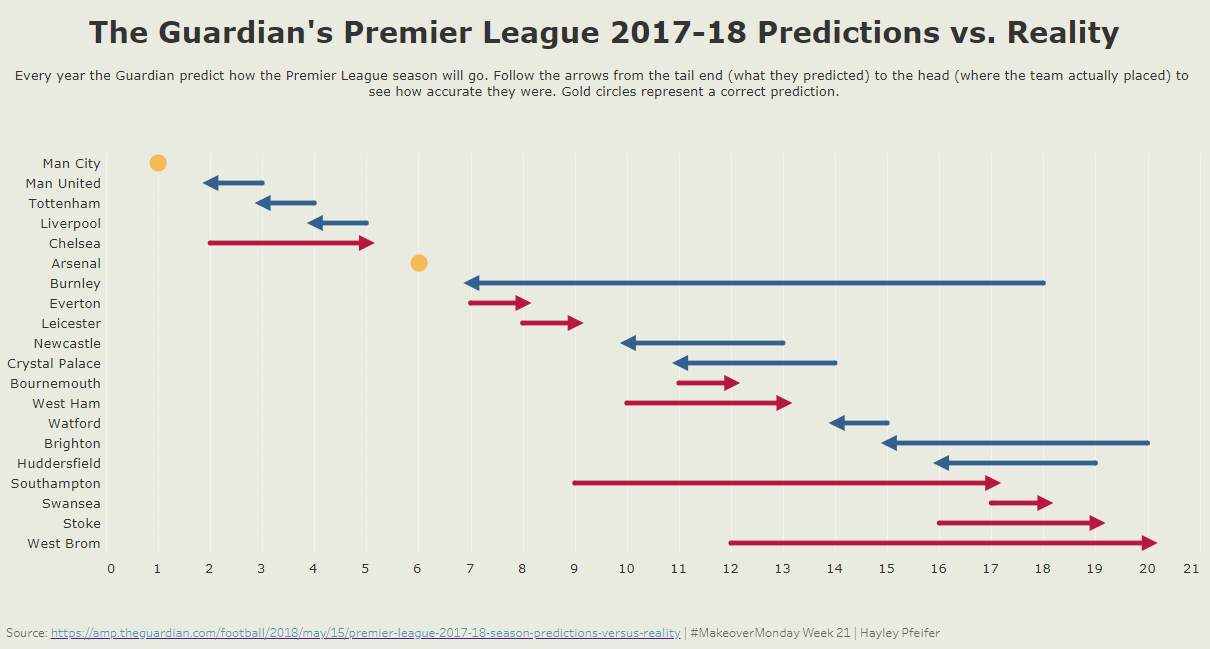