Week 20 – Youth Employment in Latin America and the Caribbean

This week’s Makeover Monday challenge started a few weeks ago when the IADB contacted me about potentially doing a dataviz challenge with us. After chatting with them by email, I couldn’t wait to get Chloe involved, because this sounded like an excellent project for #VizForSocalGood. And Chloe being the passionate person she is, was excited straight away and keen for us all to collaborate.

So a couple of Skype chats and many emails later, here we were with a dataset in English and Spanish, a blog post on IADB’s website, a branding guide for those participating in #VizForSocialGood and a bunch of multilingual tweets ready to go.

And the community didn’t disappoint – we received a number of great submissions and I noticed quite a few new participants, so welcome to all of you!

While you may think that MakeoverMonday is limited to the vizzes you find on Twitter, there are plenty of people who utilise the data from our website and our Tableau Public .twbx files but who never publish their work on Twitter, so there are likely many more participating than we all think :-).

What I really enjoyed this week:

Many of you took the opportunity to not just participate in MakeoverMonday as part of your weekly ‘Tableau exercise regime’ but you also ended up crafting data stories that had more depth and interactivity to submit for #VizForSocialGood.

And your work doesn’t have to end here. If you want to iterate and make it even more awesome, you can still submit to #VizForSocialGood until June 6th.

We wanted to use MakeoverMonday as a catalyst to kick off this challenge for Viz For Social Good and it seems that a number of our community members took the plunge and joined – well done! We’ve had some early feedback from IADB as well and they’re very excited about the results they’ve seen so far.

And it’s not just the collaboration of the two projects, but there were also collaborations in the community with Pooja and Adam providing an outstanding example of a submission for both projects which they developed as a team.

PICKING A STORY AND TAKING IT FORWARD

Sometimes we fall into the trap of using all the data in our vizzes and don’t end up with a structured, coherent story that is easy for our audience to comprehend. What I liked this week was that many people chose a specific angle, such as a look at unemployment or a focus on the differences between males and females or age groups to build a story from there. We don’t have to use the entire dataset in our viz, it actually is helpful to really pin down something we find particularly interesting and go deeper into it rather and creating something general and nondescript.

Here is a great example by Charlie who focused on Guatemala as a country and the high number of Nininis there. His viz explores with a very logical flow his hypothesis as to why Guatemala has such high numbers of Nininis compared to other countries. 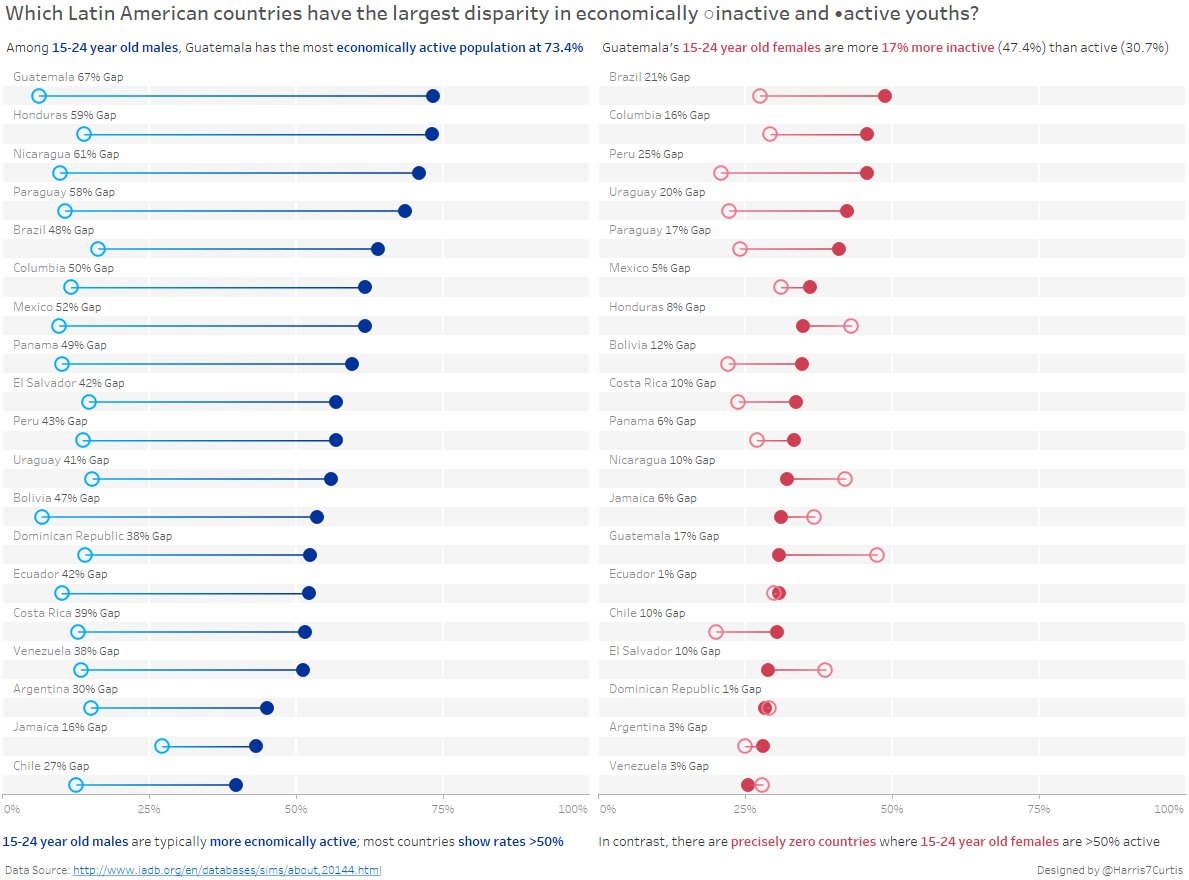 Curtis looked at the disparity between economically active and inactive youth, taking all the countries by honing in on a measure of the differences.

Eliška focused on the three Caribbean countries with the highest level of youth unemployment and chose to highlight the issue using colours very effectively.

I really enjoyed seeing non-English vizzes this week. I may not understand the content, but it’s great to see data stories being created for the huge number of Spanish and Portuges speaking people for whom this topic is so relevant.

Being a bilingual person myself, I really liked that people embraced the opportunity to create something in their native language to bring a topic to life for a new audience.

Here are some of those examples 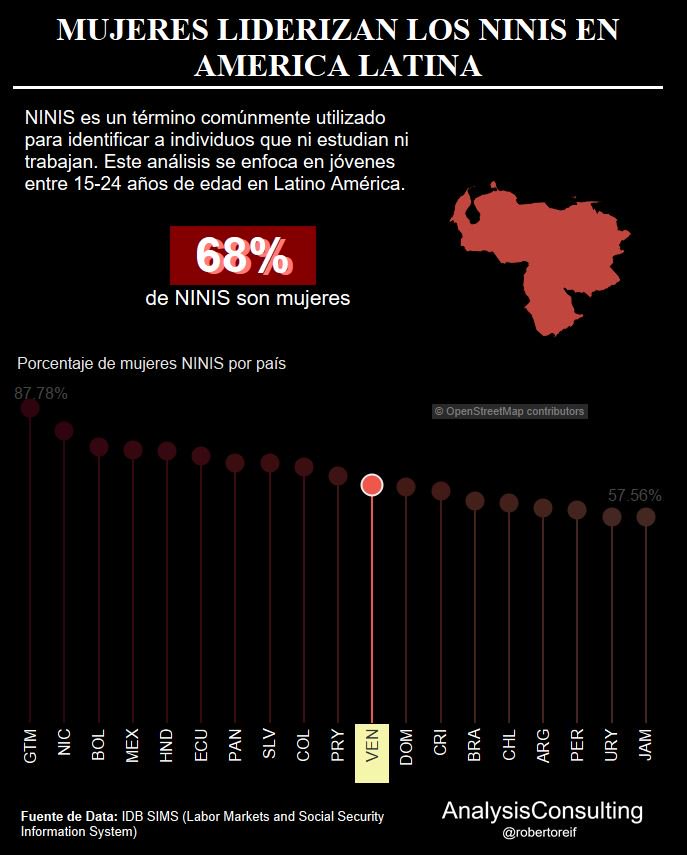 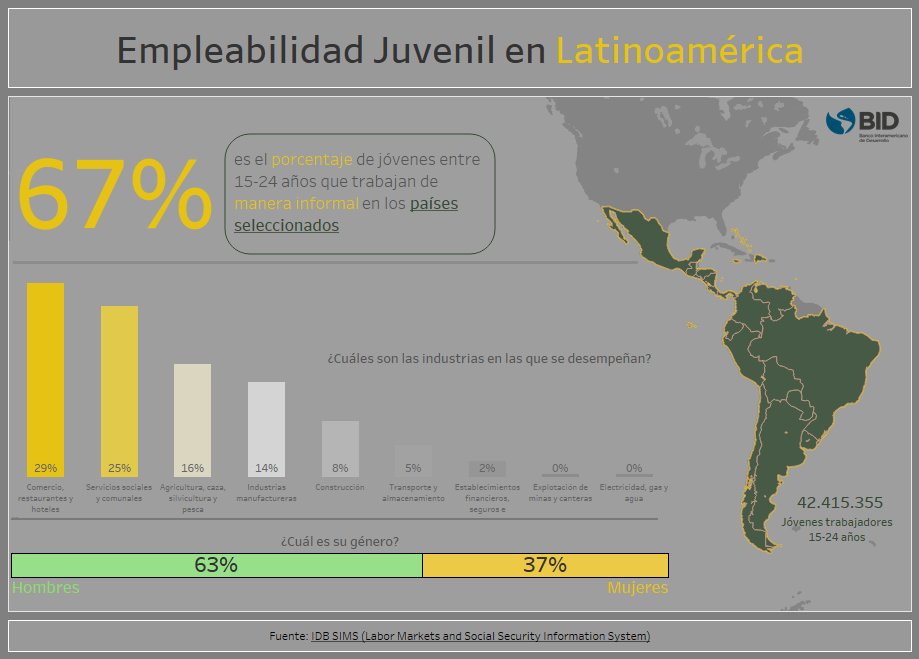 But we’re all keen to learn something as well, right?

So here are my lessons for this week…

LESSON 1: YOU DON’T HAVE TO MAP COUNTRY DATA

Whenever we provide geographical data, be it country, city or postcode information, we invariably get a bunch of maps. In principle there is nothing wrong with maps and I’m a secret/not-so-secret map lover, they’re beautiful things. But are they always useful? I would argue NO. Not always does a map enhance your viz and it can even be distracting or distorting your results, especially when measures are used to generate a colour range on a map.

I also find that maps take up a lot of space to display nicely, especially when you include the US with the size of Alaska attached and the awkward location of Hawaii :-).

South America actually has a nice shape for a portrait viz with a good ratio. But I would argue you don’t need to have a map to create an effective viz or even to make it interactive.

My recommendation: Next time you get geo data, set yourself the challenge of finding other ways to get your audience engaged with the country information, e.g. through well-formatted labels, specific iconography, bars or well formatted text elements.

This was part of my critique of the original viz and it’s something I saw in the submissions as well. Yes I can be lenient for non-native speakers, but I want people to learn and if I’m too forgiving then they won’t have the chance to improve.

I notice, some weeks more, other weeks less, that people are not being very specific in their titles and descriptions and this being ‘wishy-washy’ weakens their message significantly.

In the original viz, the title was ‘Where are the young people in the labour market?’ – when you read this statement/question, what do you think of? What do you expect the answer to be? ‘Where’ is a location-relative pronoun, which means it relates the stuff in the sentence to some sort of location. But the viz didn’t talk about a location. It talked about sectors or industries. So ‘where’ in this context is misleading.

Yes, you can argue that I’m being pedantic, but these are the little things that matter. Expressing yourself clearly is important when you want to communicate a message and I would argue that telling a data story about the topic of youth employment in Latin America and the Caribbean is important enough to justify attention to semantic details.

We must also remember that most of those who our viz is aimed at (i.e. the general public and our Tableau friends browsing Tableau Public) won’t have any background on the topic. Our viz is likely the first thing they see about it, so let’s help them by being specific and by choosing our words wisely.

My recommendation: seek feedback! Always ask at least one other person for their opinion on your viz. Don’t even tell them any background information, see what they say and what questions they ask. Do they understand what you’re communicating?
Andy and I typically exchange at least one version of our vizzes before publishing, if not more. We also ask others for feedback and then we iterate until the viz is at the point where we’re ready to publish.

Remember, #MakeoverMonday is not a race. It’s an opportunity to learn and practice. There are no gold stars for being the first to submit a viz. You don’t even have to be finished by Monday or Tuesday or Wednesday. We’d rather you create your makeover when you have some space to think and work through the challenge with your learning and practice objectives in mind, instead of throwing something together in a rush.

You get out of it what you put in :-). So let’s move on to the favorites from this week – the vizzes that stood out for me… 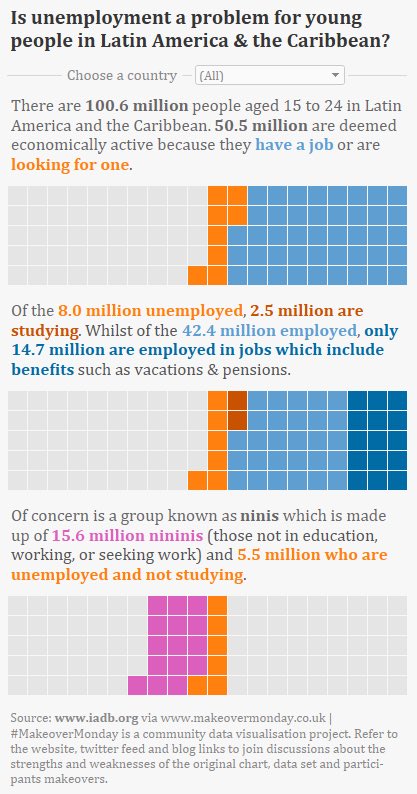 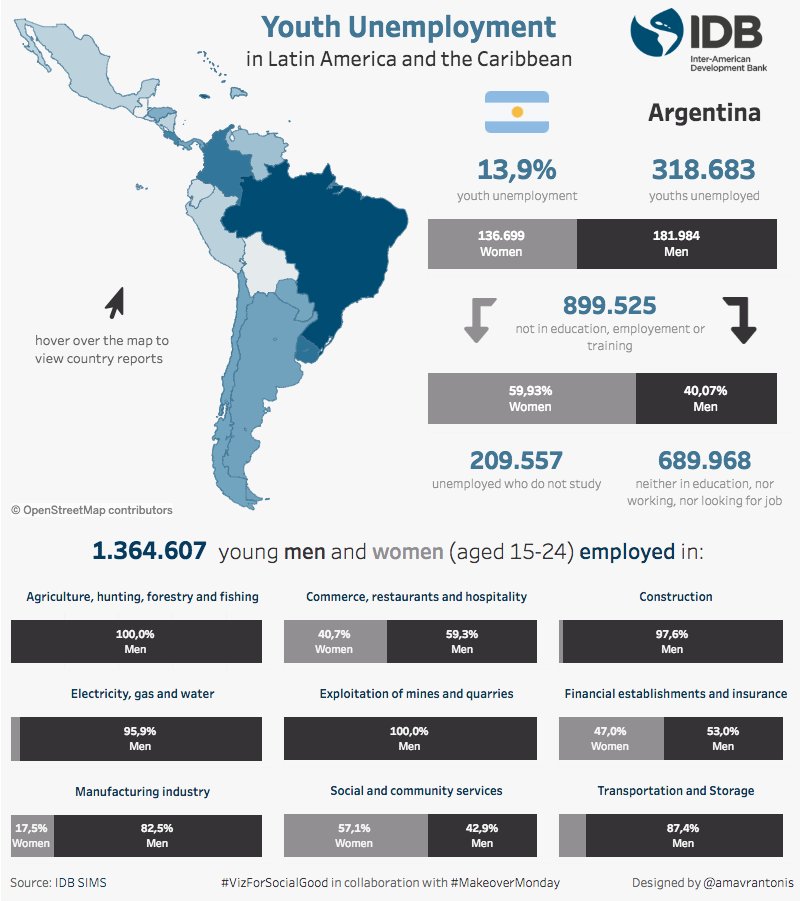 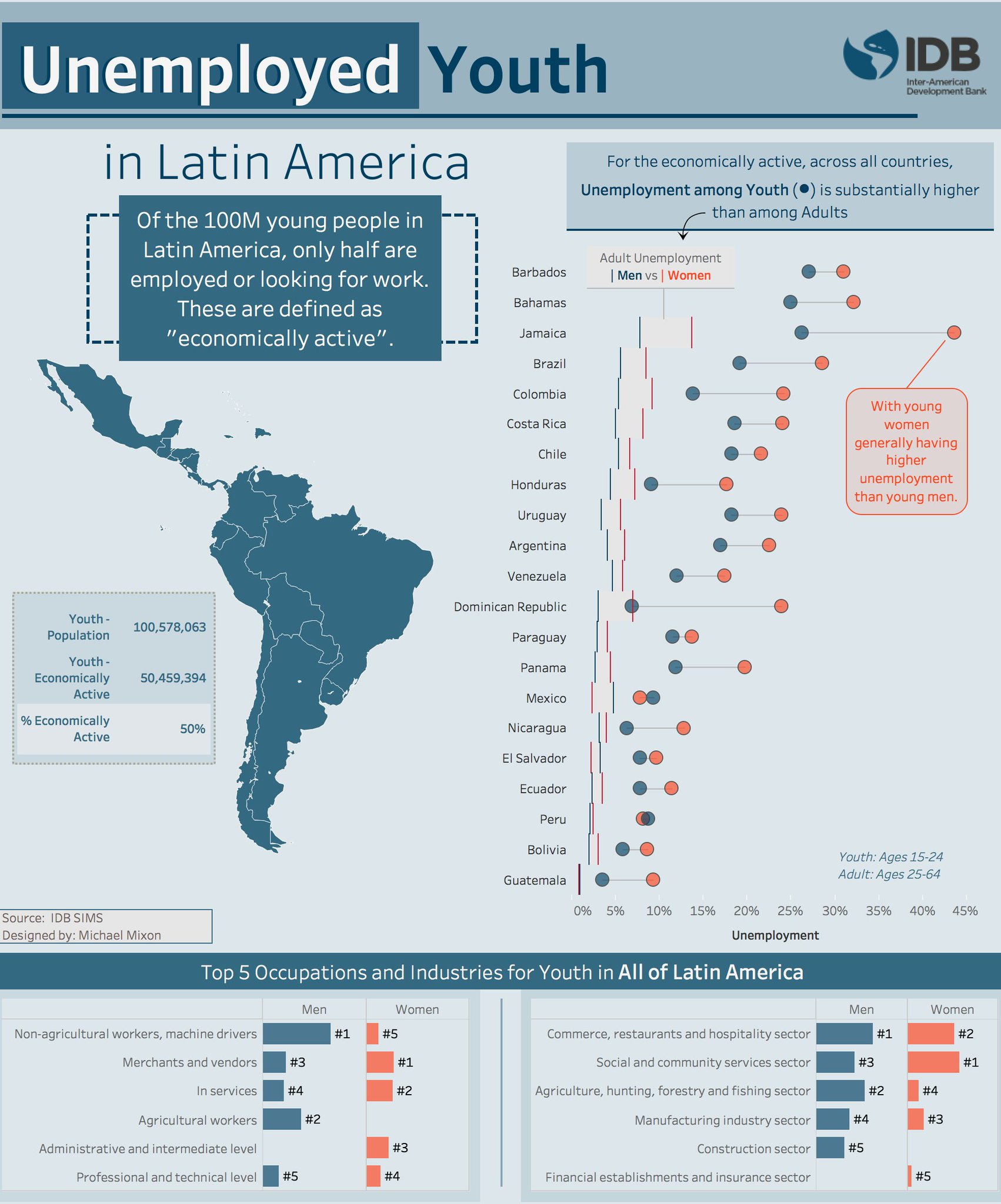 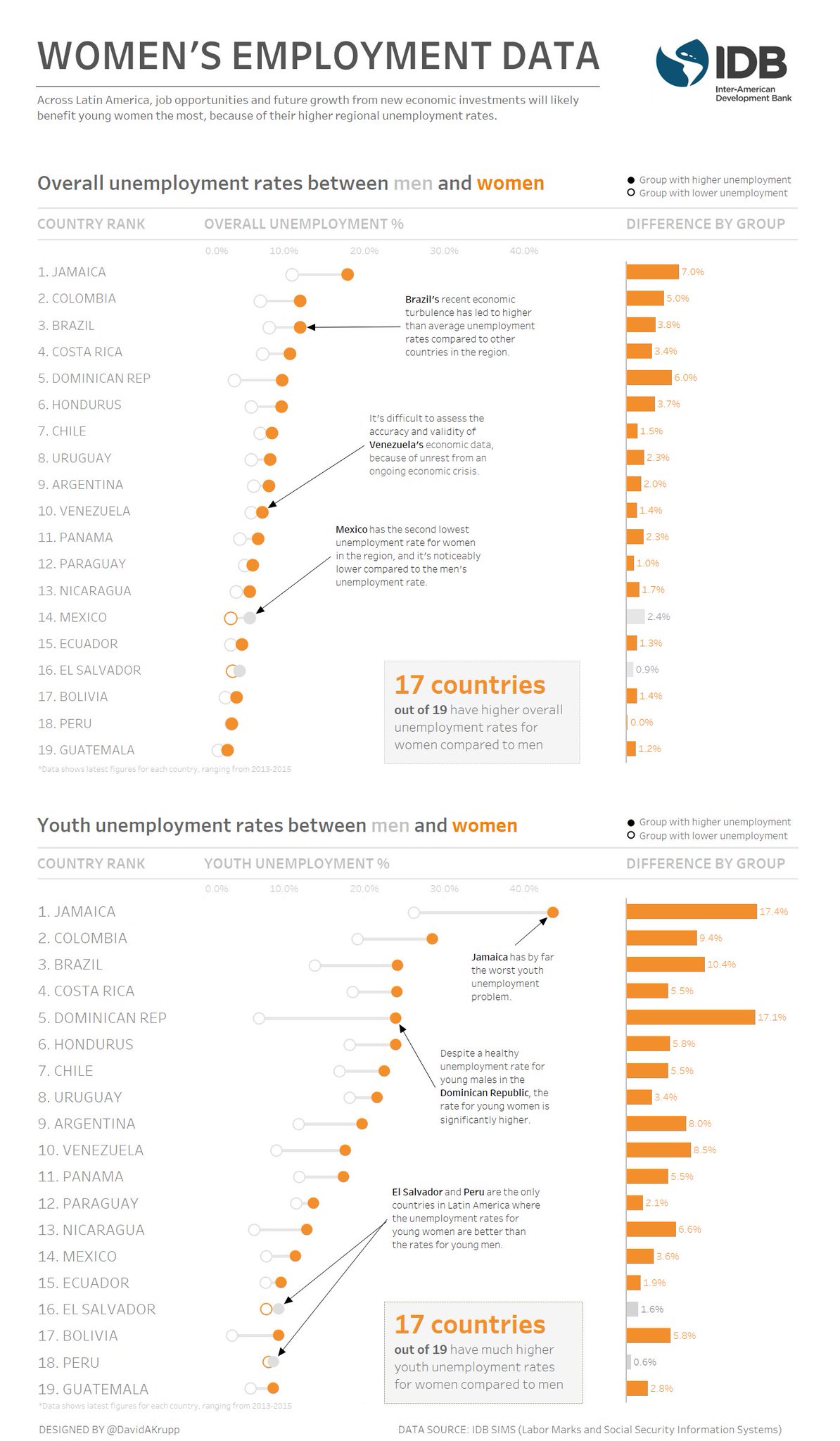